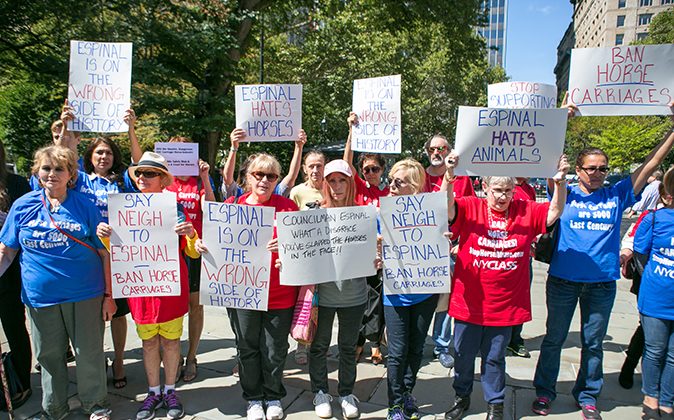 Mayor Bill de Blasio resolved to ban horse-drawn carriages in the city early in his administration, and the long-awaited bill is set to be introduced this month.

City Council Speaker Melissa Mark-Viverito said the proposal, which council members were briefed on over the weekend according to Capital New York, would address alternative employment options for drivers of horse-drawn carriages.

There are about 300 drivers with horse carriage licenses, which are set to expire in 2016. The proposal would offer the drivers green-cab medallions, which are worth around $6,000 and issued in limited quantities by the city.

The bill will be introduced on Dec. 8, the next stated City Council meeting, according to Queens Councilmember Daniel Dromm, who will be the lead sponsor of the bill.

“Horses don’t belong on NYC’s congested streets amid cars and pollution. There have been too many crashes and too many horse deaths and injuries to justify the continuation of this industry,” Dromm said in a statement.

Councilmember Rafael Espinal, who chairs the Consumer Affairs committee, said in September he opposes the bill. Espinal had initially been on the fence because he was not convinced of employment alternatives.

Espinal said he did not think green cab medallions would be enough.

“I appreciate the Mayor’s office for suggesting alternative employment options, such as the green cab medallions, but I don’t think it is a solution that would benefit the industry as a whole,” Espinal said in a statement.

“Representing a neighborhood that has a high unemployment rate, I understand the effects unemployment can have on an individual and his or her family.”

“Eliminating 300 jobs is a big concern for me as is ensuring the health and safety of the horses,” Espinal said. “I look forward to reading the proposed legislation and working with both sides to reach a resolution.”

It is more likely the bill will move to the Transportation Committee, where chair Ydanis Rodriguez has voiced support for the ban and would move it to the full council for a vote.

“Horses should not be forced to share our city’s congested roadways alongside ambulances, trucks, and buses,” Rodriguez said in a statement.

Rodriguez also said he supported the proposal for providing alternative employment for people whose livelihood would be affected if the industry closes. “We at the council have made sure that while advocating for the rights of our animal friends, we have not forgotten the potential human impact of this legislation.”

The industry was taken aback by this bill, said Demos Demopoulos, Secretary-Treasurer of Local 553 of the International Brotherhood of Teamsters union.

The teamsters had offered council members and City Hall staff tours of the stables and reached out for negotiations that all “fell on deaf ears,” he said. “All year long, we offered to discuss with the administration what changes to make for the industry,”

“What support we do have, I hope that’s enough,” Demopoulos said. Labor groups, some council members, and 63 percent of New Yorkers according to a public poll earlier this year support the industry.