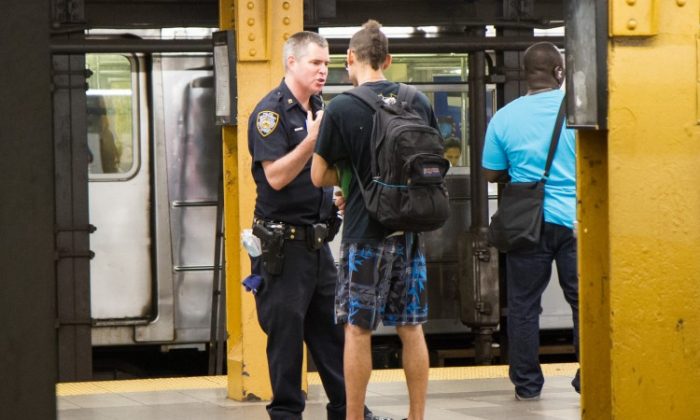 A young man is questioned before being frisked by a police officer at the Penn Station subway platform in Manhattan on Aug. 7. (Benjamin Chasteen/The Epoch Times)
US

NEW YORK—A hearing on four pieces of legislation which, if passed, would impact how the NYPD operates is scheduled for Oct. 10 at the City Council chambers at City Hall.

1. Require police officers to, before they search someone, let them know of their privacy rights, and record via audio or written signature that the person has consented. This bill is sponsored by 26 council members.

2. Strengthen an administrative code that prohibits bias-based profiling by police officers. This bill is sponsored by 29 council members.

3. Require police officers to identify themselves to the public before performing actions such as frisks, traffic stops, and home searches, by their full name, rank, command, and reason they are undertaking the specific action. After the action is over the officer must give the subject(s) his or her business card. This bill is sponsored by 27 council members.

4. Amend the city charter by creating independent oversight of NYPD operations in the form of an inspector general, appointed by the mayor for a term of seven years, renewable once. The inspector general would report to and be supervised by the mayor and could not be a current NYPD member or have served within the NYPD in the last 10 years. This bill is sponsored by 30 council members.

None of the bills so far have the official support of Christine Quinn, speaker of City Council.

Previously, Roy Richter, president of the NYPD Captains Endowment Association, expressed concerns with giving power to a non-elected official that could usurp City Council’s current role of NYPD oversight, while Eugene O’Donnell, a former NYPD officer and current professor at John Jay College of Criminal Justice, said a strong case could be made for City Council not being able to devote time, and lacking expertise, for the intense and demanding work oversight entails.

O’Donnelll added that the inspector would ideally be a former federal judge or prosecutor with “rock-solid integrity.”

Besides the 10 a.m. Oct. 10 hearing of the Committee on Public Safety, there are two public hearings scheduled: one on Oct. 23 (Brooklyn College Student Center), and the other on Oct. 24 (York College Performing Arts Center).