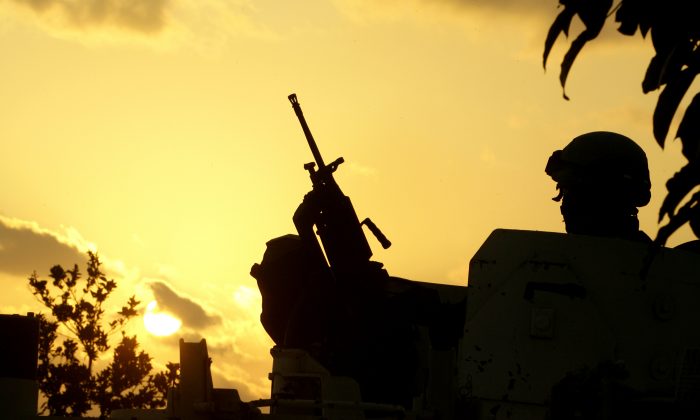 An United Nations Interim Force in Lebanon (UNIFIL) soldier stands guard next to the reported location of the launching of four rockets at Israel, on the outskirts of the southern Lebanese port city of Tyre on Aug. 22, 2013. (Mahmoud Zayyat/AFP/Getty Images)
Opinion

The U.N. peacekeeping force in south Lebanon (UNIFIL) has handed over a local staff member accused by Lebanon’s authorities of spying for Israel.

UNIFIL spokesman Andrea Tenenti said the man “was in the UNIFIL compound when authorities requested him.” As such, the U.N. authorities had to decide whether to turn him over to the Lebanese police.

As Tenenti explained: “We asked U.N. headquarters in New York to determine whether immunity would be applied in his case, and the U.N. determined that since the allegations were not related to his official functions, immunity from legal proceedings would not apply.”

On the face of it, this could be just another instance of the U.N. bowing to political pressures in a conflict zone. But it could be something much more momentous: an actual change in policy about handing over staff members accused of serious crimes.

Throughout 2015, there has been a major campaign to expose weaknesses and flaws in the U.N.’s accountability laws, mainly focused on a culture of impunity for rape and sexual violence. U.N. peacekeeping personnel have been under particular scrutiny, though the problem extends much further. The laws meant to hold them accountable have either proved ineffective or have simply not been implemented to deal with the vast majority of serious crimes committed by U.N. personnel.

The U.N.’s accountability laws are complex, with different regimes for police, civilians, and military troops. The latter are dealt with under agreements with their national states—effectively barring investigations or court proceedings in the country where they offend, while requiring their countries of origin to prosecute and punish them.

There are serious problems with this system, not least because many countries do not have the necessary laws to prosecute their nationals for crimes committed abroad, ultimately the U.N. claims that such matters are out of its hands. Those claims, however weak they may be, simply do not apply where it comes to civilian personnel.

Civilian U.N. personnel are basically treated like international civil servants. They are protected from national courts or police investigations by functional immunity, which relates to the official functions of their jobs. Essentially, it enables personnel to work abroad, sometimes in hostile environments, without fear of pernicious or spurious legal proceedings being used to stop them doing their work.

That should mean that where individuals act outside of their official functions, they are not immune, and therefore can be local investigations and legal proceedings may take place. Or at least, that’s the theory. In practice, the U.N. has repeatedly failed to uphold the rules.

The official line is that when an allegation is made about a serious crime, the U.N. conducts its own investigations before determining whether functional immunity applies. But in practice, the U.N. looks at the relative merits of the allegation and conducts its own investigation into the evidence before deciding whether to cooperate with local authorities and hand over the staff member.

This practice has been widely criticized, with the U.N.’s own Office of Internal Oversight Services noting that U.N. investigations can take many months or even longer than a year. And when it comes to many crimes, particularly sexual violence, those lengthy investigations hamper or wholly undermine the ability of local authorities later to gather credible evidence to use in a case.

An idealist would say that the UNIFIL decision could mark a genuine change. Rather than conducting its own internal investigation, the U.N. has turned the alleged perpetrator of a crime over to the local authorities for them to investigate into the allegations.

This, of course, is how functional immunity is supposed to operate. It allows local authorities to investigate a serious crime that has nothing to do with the alleged perpetrator’s official duties within their job. But is this the same advice that will be given in future where it comes to allegations of rape, or abuse, or deaths caused by drunk driving, or of murder?

To judge whether the UNIFIL affair will really herald this much-needed change, we need to answer certain crucial questions. It’s not clear exactly why the U.N. decided to hand over this man. Perhaps it really is because he is accused of spying for Israel—or because UNIFIL has come under political or other pressures that could damage the mission.

And if the U.N. employee were in Azerbaijan, or Iran, or Cuba, and the local authorities claimed they were an Armenian agent or a Western spy or a CIA agent or similar, would they simply accept the accusation and hand over the person in question?

Of course, an allegation of espionage is a manifestly political one compared with sexual crimes or murder—and the circumstances of this particular case make it something of an imperfect precedent. Yet the legal advice from U.N. headquarters seems incontrovertible, and one would hope that if spying can never be part of the official functions of U.N. civilian personnel, nor can rape, abuse, or murder.

Still, before getting too excited, we should wait for the U.N. to actually stop protecting civilian personnel under the guise of “U.N. investigations” and for actual signs that the UNIFIL precedent could finally penetrate the iron-clad culture of impunity.

Rosa Freedman is a senior lecturer of law at the University of Birmingham in the U.K. This article was previously published on TheConversation.com