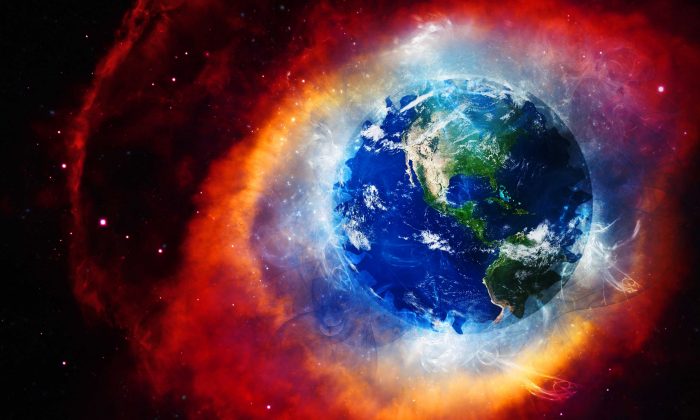 Could the Earth’s Magnetic Poles Be About to Flip? Experts Warn of Devastating Consequences

The Earth’s magnetic field, which affects everything from communication to power grids, could be about to flip, scientists said.

The field, which extends thousands of miles into space and defends the planet against highly damaging solar winds, has weakened by 15 percent over the last 200 years.

According to a new report from the Laboratory for Atmospheric and Space Physics at the University of Colorado this could be a sign that the poles are about to flip.

And if that happens it would make some areas of the planet uninhabitable because the power grids would be down.

Lights, computers, and cellphones would all cease to function.

There is historical precedent for the phenomenon, with the poles flipping every 200,000 or 300,000 years.

We are now overdue because the last one was around 780,000 years ago.

If—or when—it happens the impact could be devastating for people, said Richard Holme, professor of Earth, Ocean and Ecological Sciences at Liverpool University.

“This is serious business,” he told MailOnline.

“Imagine for a moment your electrical power supply was knocked out for a few months—very little works without electricity these days,” he said.

Because the radiation at ground level would increase, this would lead to double the deaths from cancer—possibly 100,000 people a year, according to scientists from UCL.

“Radiation could be 3-5 times greater than that from the man-made ozone holes. Furthermore, the ozone holes would be larger and longer-lived,” Dr. Colin Forsyth from the Mullard Space Science Laboratory told MailOnline.

But, he added, predicting when the poles would flip is difficult.

“We have only been recording the Earth’s field for around 170 years; about 1-15 percent of the time a flip is expected to take,” he said.