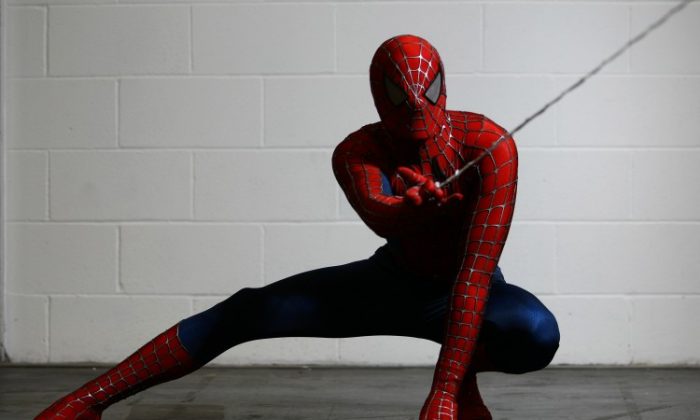 An actor dressed as Spiderman poses for a photo. (Jordan Mansfield/Getty Images)
Science

When Spiderman used his web to halt a R160 New York City subway train before it plunged off the tracks, the results were realistic, according to new U.K. research.

Three Masters students at the University of Leicester decided to calculate whether the scene in “Spiderman 2” could really happen. That is, does the superhero’s webbing behave like a real spiderweb?

“It is often quoted that spider-webs are stronger than steel, so we thought it would be interesting to see whether this held true for Spiderman’s scaled up version,” study co-author Alex Stone said in a press release.

“Considering the subject matter we were surprised to find out that the webbing was portrayed accurately.”

The students determined that the webbing must have used 300,000 newtons of force to stop those four packed subway cars. They factored in the momentum of the train going at full speed, the driving force of the engine, and how long it took the webs to bring the train to a complete stop.

Based on that, they calculated that a real web that size could do the job if it were as tough as that of the Darwin’s Bark Spider, Caerostris darwini, an orb-weaving species with the strongest known web. This means that Spiderman’s webbing is proportional in strength to a real spiderweb, and it could realistically stop a train.

“While our work may not seem to be very serious, it has helped teach us about applying physics to varying situations as well as the peer review process through which scientific journals operate,” study co-author James Forster said in the release.

“This makes it an invaluable experience to anyone who wants to go into research later in life.”

The paper appeared in the University of Leicester Journal of Special Physics Topics, which publishes papers by final-year students studying the four-year Master of Physics degree.