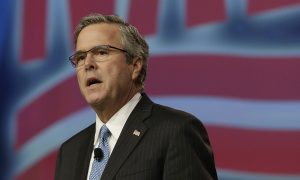 Are You Also Confused by This Jeb Bush Bit on Immigration?
0
Share Now
TelegramFacebookTweetEmailTellMeWeReddit
Copy Link 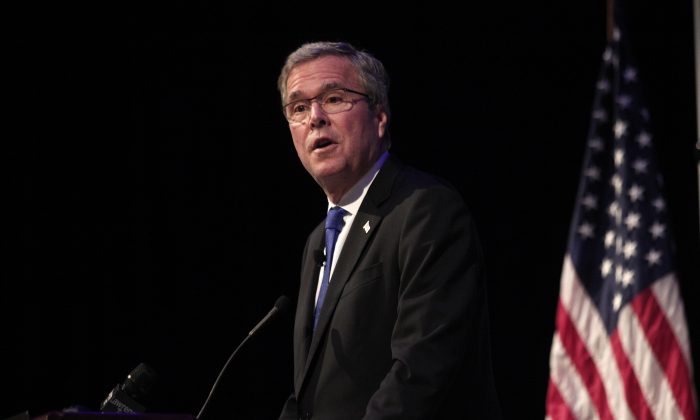 As many expected, Mitt Romney’s exit from the 2016 race would precipitate a surge in the popularity of Jeb Bush, an establishment favorite supported by a similar GOP demographic. A new Bloomberg/Saint Anselm College poll has Bush as the front-runner in New Hampshire, being the first choice for 16 percent of likely primary voters, up from 8 percent in November.

Back then, Romney was on top as the first choice for 30 percent of primary voters, and Bush was in fourth place, behind Chris Christie and Rand Paul.

The poll points to Bush as being the candidate who can win the general election. In 28 percent of the responses, Bush is cast as the stronger candidate against Hillary Clinton, whereas Paul, Christie, and Scott Walker only picked up 18 percent apiece. But to beat Hillary, Bush will have to win the primary first, and his stance on immigration is emerging as a stumbling block that could sink his candidacy.

Bush’s support for allowing illegal immigrants to stay in the United States was a deal-breaker issue for 41 percent of respondents, and that number is likely to grow when Bush’s stance on immigration becomes better known throughout the campaign.

We need young, dynamic people that can make an immediate contribution to our economy. We shouldn’t be fearful of this.
— Jeb Bush

“Blanket amnesty as a primary focus of a candidate’s immigration platform will hurt that candidate in New Hampshire and even more in South Carolina,” said Jeff Chidester, a conservative activist and radio host in New Hampshire. “41 percent is low, which makes me question the sampling, but it will grow.”

Bush glossed over the issue of immigration during his first major campaign address at the Detroit Economic Forum on Thursday, only to give an incoherent answer when pressed by the moderator. Bush tried to frame the question as an economic one, and said that more immigration would serve as a bridge to the 4 percent annual growth he would aim for as president.

“We need young, dynamic people that can make an immediate contribution to our economy. We shouldn’t be fearful of this, we should say ‘what an incredible opportunity,'” Bush said, and went on to explain how border security was merely an instrument to the goal of more immigration.

“It starts with regaining confidence that the federal government can enforce the border, they need to secure the border, first and foremost, that ought to be the highest priority,” he said. “I don’t think the president should use his executive authority where he’s gone beyond his constitutional powers, that creates greater doubt as well.

In the past, Bush has stated even more aggressively pro-immigration views, heralding it as the solution to America’s demographic problem and praising them as more entrepreneurial than natives, in a speech from 2013.

A similar proportion of Iowa GOP voters said that Bush’s position on immigration was a deal-breaker. In 30 percent of those responses, voters agreed that “Jeb Bush is out of touch with the Republican party on Common Core and immigration” in a January poll.

The figure would likely be higher if the two issues were polled separately. Only 20 percent of GOP voters in New Hampshire said that Bush’s support for Common Core was a major issue.