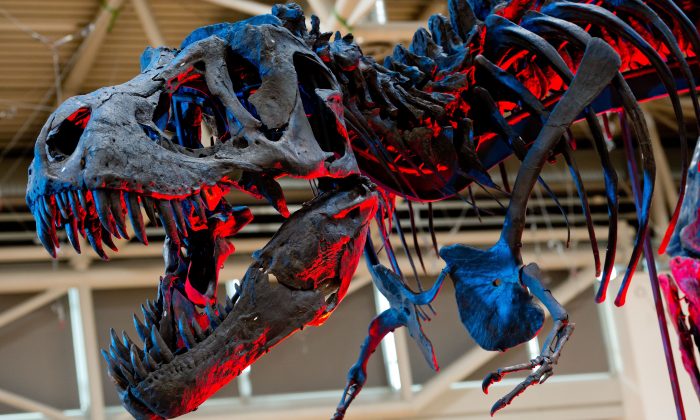 The skeleton of an adult Tyrannosaurus rex is illuminated as it is on display during 'The Munich Show' exhibition for gems, jewellery, minerals and fossils on October 24, 2014 in Munich, southern Germany. ( SVEN HOPPE/AFP/Getty Images)
Science

In 1990, Michael Crichton published his novel Jurassic Park, in which scientists bring dinosaurs that had been extinct for millions of years back to life, cloning them from DNA found inside mosquitos fossilized in amber.

Just 13 years later, scientists were able to reverse, if only briefly, the extinction of a species for the first time: Celia, the last Pyrenean ibex, a wild goat from the hills of Spain, was declared dead in 2000; three years later, a clone of Celia was born.

Celia’s clone only lived for 10 minutes before dying from asphyxiation; an extra lobe has grown in one of her lungs, and she couldn’t breathe.

But the clone was lucky to have been born at all. The scientists had implanted clone embryos — goat eggs hollowed out and replaced with Celia’s DNA — into 57 surrogate goats; of the seven that became pregnant, six had miscarriages.

Still, the project proved that “de-extinction” wasn’t just a pipe dream, and since the birth of Celia, other species have been targeted for de-extinction.

In Australia, an initiative called the Lazarus Project — named after the biblical figure who was raised from the dead — is working on restoring two types of brooding frogs that disappeared in the 1980s. Other teams from around the world have looked to revive the carrier pigeon and the Tasmanian tiger.

What unites all of the species that have been selected for de-extinction — and what separates them from dinosaurs — is that all have become extinct quite recently.

What unites all of these species that have been selected for de-extinction — and what separates them from dinosaurs — is that all have become extinct quite recently, which means that scientists have relatively accurate copies of their DNA. DNA starts to break down immediately after death.

The decay takes time. The DNA of a dead organism has a half-life of 521 years, which means that after a millennium only one-quarter of the genetic material is left. Even if the DNA were kept at the ideal temperature of 23 degrees Fahrenheit, the last strand would be destroyed after 6.8 million years. The youngest dinosaur bone is an estimated 65 million years old.

But if Jurassic World doesn’t appear feasible within our current technological horizon, an enormous zoo featuring Ice Age animals just might be possible. The woolly mammoth became extinct a mere 4,000 years ago, and while there isn’t enough genetic material to make wholesale clones, there’s enough for scientists to experiment with hybrids between the extinct species and modern elephants.

In March, Harvard geneticist George Church successfully spliced DNA from the wooly mammoth onto the genome of a living Asian elephant using CRISPR technology. That doesn’t mean that the elephant suddenly sprouted fur, just that hybrid mammoth-elephant cells could be grown in a petri dish. The ultimate goal for Church is to grow those cells into artificial wombs so that whole mammoth-elephant hybrids could be bred.

In this respect, the plot of Jurassic World — which features a genetically modified hybrid T-Rex — is more up to date than the original film franchise, where the attractions are genetic replicas of the original dinosaurs.

Ideally, Church would like to use real elephants as surrogates for his mammoth hybrids, but ethical considerations — remember the goat miscarriages — especially on an animal as sentient and endangered as the elephant, makes artificial wombs a likelier option.

For Church, the resurrection of long extinct species is all but inevitable.

For Church, the resurrection of long extinct species is all but inevitable. The efficiency of genome sequencing machines, which can help piece together the fragmented DNA of extinct species, has risen exponentially in recent decades, and in 2013 Church said he could definitely envision the birth of a Neanderthal baby within his lifetime.

The process would involving inserting thousands of splices of the Neanderthal genome into a human stem cell, and then propagating indefinitely to generate a stem cell line that gets closer and closer to the genetic sequence of a Neanderthal.

All of this is conditioned, of course, on the government permitting human cloning, which isn’t likely anytime soon. The practice is currently banned in over 30 countries, including the United States, Western Europe, and Japan.

At the moment, there are strong legal and social norms not only against human cloning, but also against manipulating human embryos—and that sentiment is only growing. In April, Chinese researchers modified human embryos cells for the first time, provoking backlash from the international research community because of the bioethical concerns of such an enterprise.