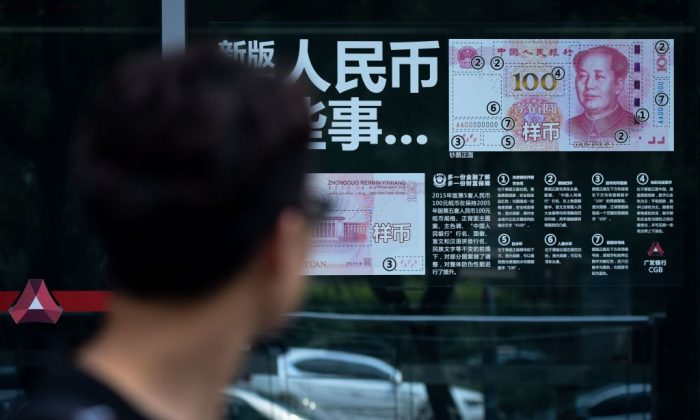 A man looks at currency information posted on the window of a bank in Beijing on July 20, 2018. (Wang Zhao/AFP/Getty Images)
Thinking About China

As I write this, the Bank of England has just raised its benchmark short-term rate for the second time in the recent past. The European Central Bank stood pat at its Feb. 3 meeting; but beset by inflation at a multi-decade high, it is inevitable that the ECB will get dragged into the nascent inflation-fighting across the globe sooner rather than later.

China is an aberration now. The People’s Bank of China has recently embarked on a multi-step easing process, both cutting short-term interest rates and relaxing bank reserve requirements.

Analysts who follow China by and large blame two things for the divergence. First, China’s half-hypocritical “zero tolerance” policy for COVID has exacerbated what was already a dramatic slowdown in the world’s second largest economy. Second, the obscenely hyper-leveraged real estate sector continues to slowly implode, led by that high-profile “marketized default” of Evergrande.

Notably, the ripple effects are now spreading throughout the country on the latter, as developers and investors alike pull their horns in. This is ominous; and tells the tale of where China’s economy and slowly shrinking bubbles are headed. At a time when Evergrande and other developers need continued new business to keep all their respective “balls in the air,” business and new orders have collapsed.

So far, our “ingredients” for a major, looming comeuppance for China are the following:

Most of the world sees this, even if it remains oblivious to the likely geopolitical and, later, the global deflationary fallout at some point. Those will be subjects of future articles.

But what few see is an evolving game plan where Chinese leader Xi Jinping is in some ways actually working to hasten a debacle; albeit one he would capitalize on in various ways.

Having gamed the West and other, emerging nations as well, China now is going to become more insular. It has bought, borrowed, or stolen all the world has had to offer. Now—with the retreat from globalization in many ways accelerating over the last couple years—Xi is looking to consolidate his domestic power and stature by, ostensibly, reverting to Mao Zedong’s model of “common prosperity.”

The $64,000 question, of course, is that as China financially/economically erodes for a spell, can the rest of the world be spared a related fallout? After all, when the last major geopolitical foe of the United States—the former Soviet Union—went into history’s dustbin, the effect on global markets and the economy was slight. As a percentage of the globe’s total growth, the Soviet economy hardly registered as a rounding error.

China is a FAR different kettle of fish.

“Chinese president Xi Jinping is trying to revive a form of socialism reminiscent of the era of Mao Zedong. His government has started cracking down on the excesses of capitalism, including the wealth and power of tech tycoons, and the rampant speculation and rising debts of the property sector.

“The problem: what happens in China no longer stays in China, which is the main engine of global growth. In many ways, China follows the same deformed model of capitalism as most western countries, only more so, taking on ever increasing levels of debt to generate less and less growth.

“The result is growing financial fragility. Like its more advanced rivals from the US to Japan, China has created a financial system that is in constant need of government support stimulus.

“What we are likely to witness over the coming months is an epic clash between a leader with supreme powers determined to change the course of his nation, and the economic constraints imposed by gargantuan debts.” (Emphasis added.)

For a much deeper dive into all of this, see “China and the New World Disorder” and “Evergrande’s Marketized Default and the Consequences” on my website, The National Investor.

Also, I recently took a very deep dive into this whole subject in a video interview with my old friend, the long-time Washington-area conservative columnist Cliff Kincaid.