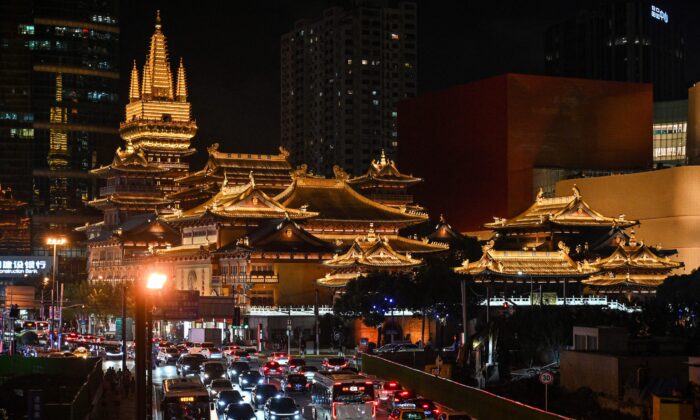 Vehicles make their way along a busy road past the Jing'an Temple in Shanghai, China, on Oct. 14, 2021. (Hector Retamal/AFP via Getty Images)
Thinking About China

Some have marveled in the recent past at the often mindless, herd mentality of people I will here only loosely describe as “investors.” People with seemingly more money than common sense have chased everything from fundamentally bankrupt meme stocks to every new cryptocurrency offering, typically based on no more than not wanting to be left out of the latest “hot story,” no matter how little is really behind it.

But long before all this, we had a lot of years—especially back in the “aughts,” but even since—when the story that professional investors, policymakers, and others were chasing was CHINA.

After President Richard Nixon opened China to the world—and specifically to U.S. capital, financial, and corporate interests—it was “game on” for almost everyone who wanted to get in on the planet’s new growth story and gravy train. All manner of big corporations set up their colonial-like presences as I referred to in part II.

Policymakers, think tanks, and elected officials were key in greasing the skids for the China phenomenon. On one of the few—but critical—things on which they long agreed, Republican and Democrat elected officials alike left no stone unturned in making sure the China juggernaut had every advantage. Bit by bit China had bestowed on its most- favored-nation trade status, was admitted to all the major multilateral, trade, and related bodies/deals, and the rest.

In his book “Trump vs. China: America’s Greatest Threat,” former Rep. and House Speaker Newt Gingrich discussed how the United States and the world bought hook, line, and sinker China’s “democratization” and related overtures as the country sought acceptance and inclusion in the global economy and markets. The only major enabler of China in the 1990s to now admit he (and America) was wrong in thinking China could be truly changed if only we brought them into the West’s “rules-based system,” Gingrich now is sounding the alarm as loud as anyone.

Along the way, though, China had most everyone thinking they were archaic if they did not embrace China’s growth, ascendance, and massive new (if increasingly DEBT-augmented) “growth.” China’s overtures to the West were of a mass of humanity that couldn’t get enough of McDonald’s … new cars … an emerging middle class/consumptive lifestyle … and American sports. Everyone went along, so vast was the wealth being generated by every aspect of this. Sadly, it’s mattered to few—sports stars, corporate chieftains, American politicians, among others—that all of them have by extension underwritten genocide and what is still an authoritarian and very anti-democratic regime.

“Covering” for China while the cash register has been ringing has gone all the way to the top of Western finance; among the globe’s financial policymaking elite who said and did anything to prop up the China growth story. Among others, this recently blew back on current IMF Managing Director Kristalina Georgieva (and clearly useful idiot to “Emperor” Xi Jinping) who—while in leadership at the World Bank—reportedly greased the wheels there to cause that institution to put LOTS of knowingly false “lipstick” on its China views/expert assessments. But—though some obligatory handwringing and second-guessing made it into the international press—she remains in her job.

But others—even the usually Establishment- and globalist-friendly The Economist—have also questioned all this and for good (to them) reason: they now see the decay and risk spreading in China and no longer see it as fashionable to carry water for this regime or its enablers.

The risk is stark. Through the 2008 global financial crisis, China for a considerable stretch was building the equivalent of the city of Houston every month. But to a fair extent this was done with massive foreign exchange and trade surpluses due to the country having been so enabled by the United States and much of the rest of the world.

But since 2008, China has, more than any country/economy on the planet, gone stark-raving mad in its use and abuse of DEBT. Not even the United States has done this to such an extent (relative to the size of each one’s underlying economy). And as we have seen recently with the default of Evergrande and much more, not even the command-and-control Chinese authority structure may be enough to avert an epic implosion of China’s markets and economy.

We’ll discuss this prospect—and how Xi’s recent MAJOR policy pronouncements have made things potentially even worse—in the coming conclusion to this series.