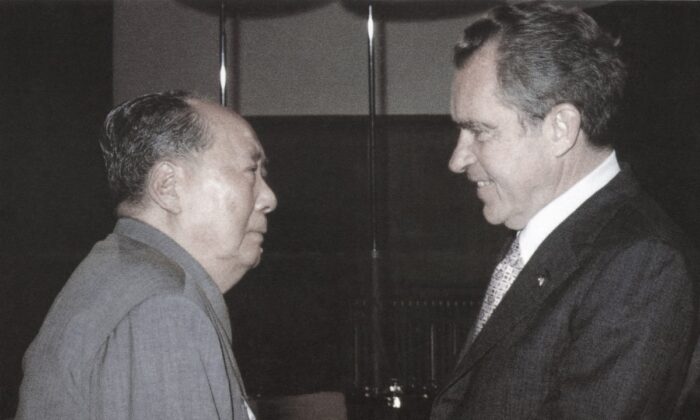 Over the majority of the 20th century, China was not one of the more notable players on the world stage. In the years leading up to World War II, the country did begin to deal with an early, insurgent communist movement against the ruling Kuomintang (KMT). Yet this development did not register as much in the world’s psyche at the time as communist movements in Western nations that preceded this, in great part due to China being a relatively closed society.

For a while, these KMT and communist opponents were forced to join together to resist Japanese invaders in the late 1930s. But once Japan had been vanquished, the Chinese communist forces under Mao Zedong resumed their revolution. The main Chinese military hero of the war who had led the fight against Japan’s invasion—Chiang Kai-shek—fled with the remnants of the Kuomintang government and military to Taiwan.

Mao’s “War of Liberation” ultimately was consolidated. Yet for all its promises, China for years remained a civilization seemingly lost in time. Prosperity eluded the people, but death did not. To this day, Chairman Mao is usually not the name first uttered in answer to the question, “Who was the biggest mass murderer of the 20th century?” But Mao outdid Germany’s Hitler and Russia’s Stalin combined, with an estimated 65 million people perishing under his rule.

Thus, when U.S. President Richard Nixon made his move to “open China” to the world in 1972, it was an extremely controversial move. Many were perplexed that the old, staunch anti-communist Nixon would so “sanitize” Chairman Mao. Emblematic of the scorn heaped on Nixon at the time by anti-communists aghast at Nixon’s move, my late friend John Schmitz—uber-conservative California GOP congressman and third-party challenger to Nixon in 1972—was asked about Nixon traveling to China. His famous reported reply: “I didn’t care that Nixon went to China; I was only upset that he came back.”

Little was it understood at the time the forces set in motion would lead to China becoming the new, chief global rival to the United States. And this is a development which—without the active involvement of (in this case) U.S. corporate and financial interests—might never have occurred.

After all, communism did not suddenly become the stuff of capital formation, prosperity, and better living standards. Directly abetted by U.S. corporate interests (though some other Western nations acted similarly to lesser extents) China was turned into the manufacturing hub of the world, due to its cheap labor and lax standards. Motivated by no more than the ability to displace higher-paid American workers, corporations of most all kinds acted in concert to turn China into very much an American financial colony at the outset.

In an excellent piece in the American Spectator back in 2011, economist, sound money advocate, and one-time New York gubernatorial candidate Lewis Lehrman expertly described this dynamic. With China, U.S. corporations—critically, as a part of keeping the global hegemony of the dollar intact as the global reserve currency—did little different than they had done for many decades prior in South American and other developing nations. As Lehrman wrote, it was also the same relationship Great Britain long had with its chief colonial client, India.

Over the years, China’s status as the globe’s manufacturer became cemented. Many trillions of dollars of surpluses have been racked up during this time by China in this, the biggest vendor financing scheme of all time. This odd symbiotic relationship immensely benefited corporate America, whose profits were bolstered when they no longer had to pay first-world wages to American employees.

China has now parlayed this into something far more than that more brief and almost exclusively financial Made in America boom enjoyed for a spell by Japan. Besides being a new economic power in its own right (albeit the most heavily indebted major economy in the world relative to its economy) it has all manner of expansion plans—military and otherwise—as it seeks to restore the glory of empire of ages past.

Yet recent decisions by modern-day would-be emperor Xi Jinping have of late increased the odds that China’s vast financial/economic gains may crumble, as did those of Japan 30 years ago when their moment in the sun became mathematically unsustainable.