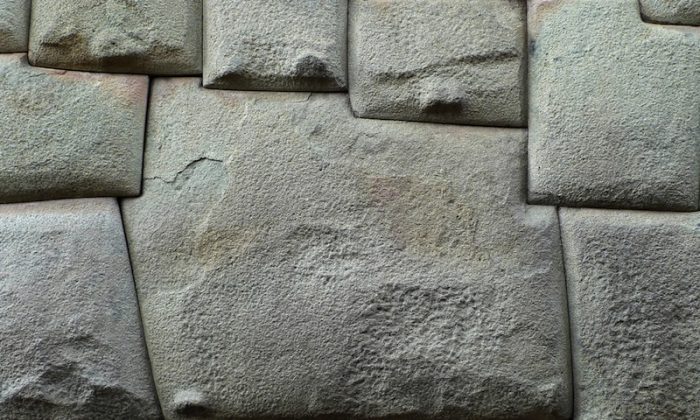 The famous 12-sided stone in Cuzco, Peru. How this stoneworking precision was achieved remains a mystery. (Shutterstock)
Beyond Science

If you take a look at some of the masonry in South America’s megalithic structures and walls, such as the 12-sided stone at Cuzco, Peru, you’ll notice immediately that things are lining up awfully well—and extremely tightly.

Our standard history texts say the Incans, who occupied Peru at the time the Spanish conquistadores arrived, were responsible for all the structures found in the area.

But how could the Incans have managed to construct, with extreme precision, structures like Saksaywaman, with stones as heavy as 150 tons nesting and dovetailing neatly together, with no evidence of the needed technology?

The “standard” explanation is that the Incans somehow managed to use a “guess and check” method of chipping at the stone with their stone tools, then setting the stone in place, seeing how it fit, then lifting it up and chipping further, then checking again, and so on.

This method appears very likely to have been used in the 16th and 17th centuries, when conquistadores and missionaries observed the Incans at work. But what they were building at the time involved much smaller stones, and not the kind of precision in creating blocks with 12 angles. Shaping such complex blocks, and with such a tight fit, only using round stone hammers seems exceptionally unlikely. Especially when dealing with 100-ton blocks!

Even those offering explanations such as these, like archeologist Jean-Pierre Protzen, still acknowledge other problems, primarily how the Incans could have transported (and lifted up and down repeatedly) these large stones. Some of the quarries were as far as 20 miles from the building sites, and in mountainous regions, no less.

Moving big stones isn’t always mysterious—if the quarry is higher than the final site or without much elevation difference, and there’s lots of space for lots of men to drag, then even enormous stones can be moved. Take, for instance, the Thunder Stone that is the seat of the Bronze Horseman statue in St. Petersburg, Russia. Weighing in at a truly massive 1,500 tons, the Thunder Stone was moved in 1768, using only manpower and some engineering ingenuity.

But for a society with only primitive tools available, and no advanced engineering, how are 100-ton stones moved through 20 miles of mountains?

At the very least, it probably means whoever built them were more advanced than we’re currently giving them credit. But what the Spaniards said at the time indicate that the Incans didn’t possess the needed engineering skills.

So it might mean that it was someone else who built the structures.

In fact, the Incans themselves acknowledged to the conquistadores that these structures were there long before them, built by a different people. A favorite topic of speculation among the Incans was apparently trying to figure out how the ancients actually built the walls, fitting the stones in so tightly.

Saksaywaman, in the history books, is said to have been completed in 1508, but those living just a few decades later, like Garcilaso de la Vega, born in 1539 and raised in the area of Saksaywaman, professed to having no idea of how the walls were constructed. And no one else seemed to, either.

Is it possible that the Incans built on top of the previously existing structures and Spanish chroniclers made the mistake of thinking they had built the entire structure?

If the builders were even more ancient, then wouldn’t our textbook understanding of history suggest that it’s even less likely previous civilizations would have the knowledge and ability to build such structures.

So we’re faced with the possibility of a civilization much more advanced than the Incans, but of which we know almost nothing about—except that they could create structures like Saksaywaman.

How the stones were moved still proves a mystery, as it does for other megalithic sites, such as the Great Pyramid of Giza. While we are capable today of transporting such stones, and lifting them up, our conception of the technological advancement of ancient peoples doesn’t always square with the achievements we have clear evidence of in these structures.

There are, however, a few theories about how the stones were shaped. Several local legends are about a liquid known to the ancients, derived from plants, which can turn rocks soft.

Explorers, such as the legendary Percy Fawcett, also brought back tales of such a substance, as did Hiram Bingham, who (re)discovered Machu Picchu. Furthermore, Jorge A. Lira, a Catholic priest, in 1983 said he was able to recreate this stone softening, but was unable to figure out how to make the stones hard again.

Curiously, marks on some of the stones at Saksaywaman look remarkably like stray marks on our modern concrete—indicative of being molded or scraped into shape.

While this remains speculative, we can be sure that stone hammers and repeated lifting up and down aren’t responsible for the precision and power needed to create Saksaywaman. Structures like this invite us to learn more about our past, and realize that the ancients might have been far more advanced than we give them credit.