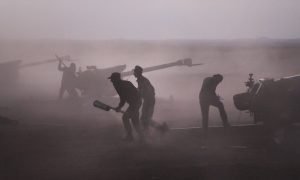 The Syrian War in One Short, Easy Read
0 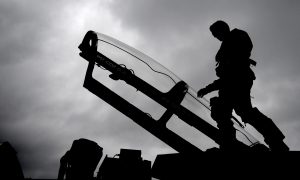 Will British Airstrikes in Syria Make a Difference in the War Against ISIS?
0 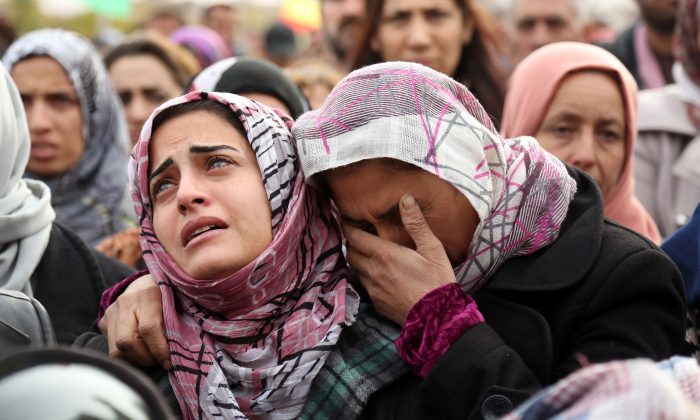 The sister (L) of Mohammed Ismael, who died in one of three recent suicide car bombings claimed by the Islamic State in the town of Tal Tamr, mourns during his funeral in Qamishli City, Hasakeh Province, Syria, on Dec. 13, 2015. (Delil Souleiman/AFP/Getty Images)
Middle East

If, as cliché has it, the definition of insanity is doing the same thing over and over and expecting different results, isn’t the recent flurry of diplomatic activity aimed at bringing about a negotiated settlement to the Syrian civil war insane?

None of the previous attempts to resolve the conflict among the warring parties through negotiations, such as the Geneva II talks in the beginning of 2014, has had a happy ending. And, in retrospect most observers would go so far as to say that they were doomed to failure.

But if, until now, there was zero chance for all principals, both external and internal, to work out a settlement, there currently exists a slender—a very slender—chance for success.

If, until now, there was zero chance to work out a settlement for the Syrian crisis, there currently exists a very slender chance for success.

This is the straw at which Secretary of State John Kerry is grasping on the eve of talks in New York.

The fighting in Syria has gone on now for over four years.

Both the government and various opposition groups have a powerful attachment to the turf over which they hold sway (one wag has called opposition-held Syria “Mad Max meets the Sopranos”). The government regularly refers to the opposition as “terrorists” while, for their part, members of the opposition have refused to engage with those with “blood-stained hands.”

The government of Bashar al-Assad, bolstered by foreign—Russian and Iranian—support, has lacked incentive for compromise. The divided opposition has had no common goal other than to remove Assad from power.

Likewise, the erstwhile foreign supporters of that opposition—the West, Saudi Arabia, Turkey—have never agreed on strategy or made clear their shared vision of what a post-Assad Syria should look like.

Finally, powerful elements fighting the Syrian government—the al-Qaida-linked Jabhat al-Nusra, and now the Islamic State—brook no compromise with a government the latter group identifies as “apostate.”

So why is there hope for a breakthrough now?

How Times Have Changed

Since the Geneva II talks last February, three events have transpired that have fundamentally shifted the environment in which negotiations will take place.

First, there was the nuclear deal in July worked out between Iran and the P5+1 countries of which the United States was a member.

The Iran deal broke the diplomatic ice between Iran and the United States and made it feasible for both to sit at the same negotiating table.

Previously, the United States had vetoed Iranian participation in Geneva II, thus leaving one of the main players in the Syrian civil war out in the cold with no other option but to act as spoiler.

The Iranian stake in Syria, which is Iran’s sole partner in the Arab world and which provides Iran with a land bridge connecting it with its Lebanese ally, Hezbollah, is simply too great for Iranian diplomats to cool their heels in the antechamber while others determine Syria’s future inside.

The second event that changed the environment in which talks will take place was the decision by Russia to become directly involved in the Syrian imbroglio on the side of the Assad government.

Before the Russian military deployment, the Syrian government was on the defensive. The two largest groups within the opposition—the Ahrar al-Sham (Free Men of Syria) and Jabhat al-Nusra—had joined ranks to form the Jaysh al-Fatah (Army of Conquest) in the northwest, and in the southwest other rebel groups, also acting in concert, found similar success.

Parts of the north and east were in the hands of the Islamic State. The government lost total control of the northern Idlib Province and military commanders were forced to pull the Syrian army back to more easily defensible positions.

Russian intervention has restored the battlefield stalemate, a necessary precondition for successful negotiations.

After all, if any of the internal players or their external backers sense the possibility for victory, why negotiate a compromise? Why not ramp up the level of violence and try to take it all?

A number of political scientists have asserted that it is necessary for a civil war to reach a stage of “mutually hurting stalemate” before it enters a “ripe moment” for resolution. A recent Rand Corporation report cites 13 cases, from Northern Ireland to Lebanon, of such a transition. The Russian military intervention is likely to add Syria to the list.

And just this week U.S. Secretary of State John Kerry visited the Kremlin to talk about Syria with his Russian counterpart, declaring in a press conference that, “Despite our countries’ differences we demonstrated that when the United States and Russia pull together in the same direction, progress can be made.”

The final event that has given credence to the possibility of a negotiated settlement is the Paris shootings.

Barack Obama took a lot of flack for declaring a day before the shootings that the Islamic State had been “contained.”

But in a sense he was correct.

Since 2014 the Islamic State has not only expanded as far as it possibly could—it is hemmed in on all sides by enemies—over the past year it has also lost territory, as its well-known defeats in Tikrit and Kobani indicate.

If the Islamic State ordered the Paris attacks on the highest level—something that is not yet clear—it marks a major tactical shift.

And since the attacks came with a return address, they might even be viewed as counterproductive to the overriding goal of consolidating and expanding territory of the Islamic State caliphate.

What the Paris attacks have enabled the Islamic State to do is seize the mantle of international jihadism with éclat.

And, by forcing Europe to close its borders and treat refugees with hostility, the Paris attacks might enable the Islamic State to stanch and perhaps even reverse the flood of refugees fleeing its territory.

What the Paris attacks have also done, however, is take the strategy of containing the Islamic State off the table.

The consensus now is that the Islamic State must instead be destroyed. Hillary Clinton underscored this shift when, in the wake of events in Paris, she observed, “Our goal is not to deter or contain ISIS, but to defeat and destroy ISIS.”

The prerequisite for doing so is ending the Syrian civil war so that a campaign to deal with ISIS might be joined.

Sketching Out a Settlement

If the ground that makes a negotiated settlement possible has shifted, what might a settlement look like? The parameters are already visible.

First, the bottom line for the United States is that Syria remain, by law at least, a single state. The fragmentation of a state that borders on both Israel and Turkey is unthinkable for American policymakers. This is particularly the case should that fragmentation lead to the establishment of an independent Kurdish Rojava (the Kurdish name for eastern Syria) on Turkey’s border, which would bode ill for the future of a unified Iraq and which, given the restiveness of Turkey’s own Kurdish population, no Turkish government is likely to tolerate.

For Russia, meanwhile, the bottom line is that Syria remain its dependable Middle East proxy—a reason for their unflinching support of Assad.

This is hardly a dealbreaker for the United States, however.

In Moscow this week, John Kerry told reporters that “the United States and its partners are not seeking regime change.” As the American special envoy to Syria indicated to me a few weeks ago, the United States is willing to allow large numbers of Assad regime holdovers to remain in place to prevent a Libya-style “hard landing” for Syria. Because of the political vacuum created by the removal of Muammar al-Gaddafi and his inner circle, Libya has become a breeding ground for jihadi groups and the epicenter of instability in North Africa.

There will, therefore, be no comprehensive ousting of the ruling party or “deBaathification,” as took place in Iraq after the defeat of Saddam Hussein’s Baath regime with disastrous consequences.

The leadership of the Syrian security establishment—particularly the military—will not face a purge nor will the army face disbanding, an act that would encourage the emergence of armed, insurgent gangs.

Undoubtedly, some members of the Syrian opposition will be integrated into the government, and some guarantees for minority rights and safety will be put in place.

If those guarantees take the form of set asides and proportional representation in governing institutions for Syria’s various religious communities, the “sectarianization” of Syria—a process that began in 2011 when each community threw in its lot either with the government or with one or another faction of the opposition—will be as complete in Syria as it is in neighboring Lebanon, where religious divisions are etched into the political system.

This leaves one major sticking point: the fate of Bashar al-Assad and his role during the transition.

While it is not unthinkable that the issue might somehow be finessed (for example, Kerry has indicated flexibility on Assad’s immediate ouster), it is the sticking point most likely to derail a settlement.

The fate of Assad is, for the Syrian civil war, the equivalent of the fate of Jerusalem for the Israel-Palestine conflict: an issue whose symbolic meaning transcends its actual importance.

And one last point. Just because most of the parameters are in place does not mean an agreement will be reached.

The “Clinton Parameters“—so-called because they were put forward in a last-ditch attempt at a solution by Bill Clinton in 2000, the last year of his presidency—are widely acknowledged to be the basis for any Israeli-Palestinian peace. They have been on the table for a decade and a half, and a resolution to that conflict is nowhere in sight.

James L. Gelvin is a professor of modern Middle Eastern history at the University of California–Los Angeles. This article was originally published on The Conversation.