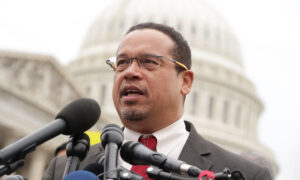 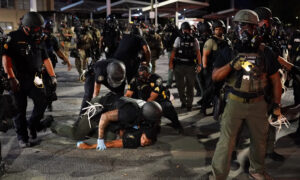 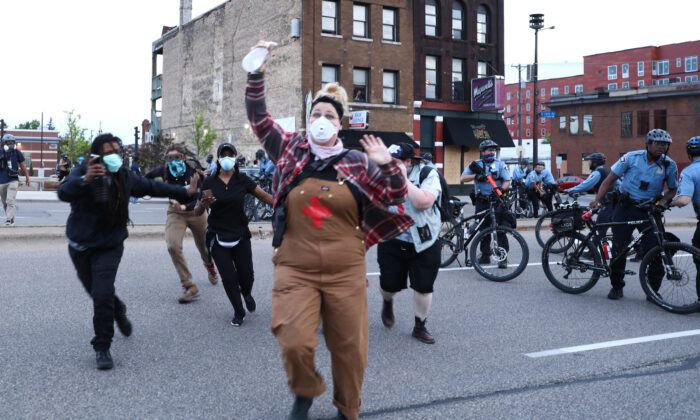 Protesters run from police officers before being detained during the sixth night of protests and violence following the death of George Floyd, in Minneapolis, Minn., on May 31, 2020. (Charlotte Cuthbertson/The Epoch Times)
US News

“If necessary the president should use the Insurrection Act to deploy active-duty military forces to these cities to support our local law enforcement and ensure that this violence ends tonight,” Cotton said during an appearance on Fox News.

Trump should say that peaceful protests are fine but rioting, anarchy, and looting will be tolerated no longer, the senator, a Trump ally, continued.

“If local law enforcement is overwhelmed, let’s see how these anarchists respond when the 101st Airborne is on the other side of the street,” Cotton added.

Cotton made a similar statement on Twitter in a post that Trump shared, thanking the senator, who he said was “100% Correct.”

The Insurrection Act states, “Whenever the President considers that unlawful obstructions, combinations, or assemblages, or rebellion against the authority of the United States, make it impracticable to enforce the laws of the United States in any State by the ordinary course of judicial proceedings, he may call into Federal service such of the militia of any State, and use such of the armed forces, as he considers necessary to enforce those laws or to suppress the rebellion.”

Law enforcement officials say evidence shows people—many of whom are linked to Antifa or other anarchist groups—meticulously planning how to inflict destruction at or near protests.

White House press secretary Kayleigh McEnany told reporters in Washington around the same time as Trump’s tweet that the Insurrection Act is “one of the tools” at his disposal, adding, “Whether the president decides to pursue that, that’s his prerogative.”

Right now, administration officials are focusing on the National Guard, encouraging governors on a phone call to deploy “far more” than the 17,000 that have been deployed in the past week. Trump doesn’t have a specific number in mind because each state has different situations.

President Lyndon Johnson, a Democrat, deployed some 12,000 federal troops to Washington in 1968 to enforce law and order after looting and arson in the wake of Dr. Martin Luther King Jr.’s assassination.

Chauvin and three other officers on the scene were fired. Chauvin was charged last week with third-degree murder and second-degree manslaughter, but people marching and causing destruction weren’t satisfied.

Governors are responsible for policing streets in their states, McEnany said. “They have quite clearly, many of them, failed to do their job,” she said.

Martial law in Washington, she told a reporter who asked, hasn’t been discussed yet as far as she knows.