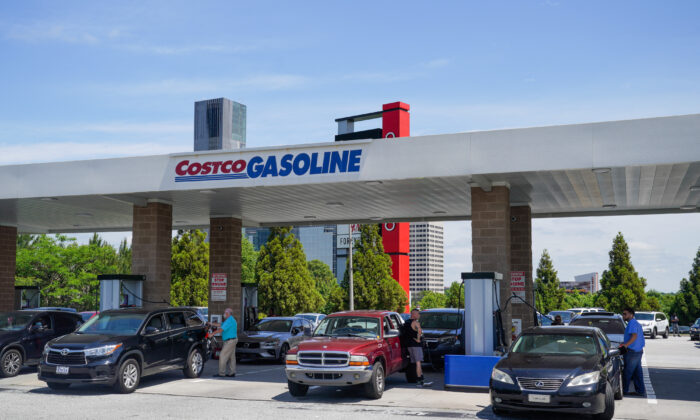 Consumers pump gas at a Costco gas station in Atlanta on May 11, 2021. (Elijah Nouvelage/AFP via Getty Images)
Companies

Costco Limits Gas Sales to Members Only in New Jersey

Costco Wholesale Corp. has restricted gasoline sales at its New Jersey locations to Costco members only, as gas prices in the state are hovering at about $5 per gallon.

The restriction came into effect on July 5. To fill up their tanks, drivers must have a Costco membership card that can be purchased from the gasoline stations run by the multinational retailer. Gas at Costco is typically cheaper than at other gas stations, ABC7 reported.

On July 5, a gallon of regular unleaded gas at a Costco station in New Jersey cost $4.55, roughly 25 cents less than the statewide average. The policy was announced by the company in June.

“I always had to use my Costco card in Ohio, but here in New Jersey they never ask for it,” Carnita Brown of the Pemberton area told the Courier Post. “I wonder why it’s going to change … and I have no idea if it’s legal to do that here.”

Costco tried to limit gas sales to members back in 2004. However, New Jersey officials ordered the company to keep its stations open to all citizens as the state deemed that the membership requirement violated its laws on fuel sales.

This time, officials seem to have no problem with the sales restriction. “The practice of offering members-only gasoline sales does not violate any of New Jersey’s consumer protection laws,” said Steve Barnes, a state consumer affairs spokesman, according to NJ.com.

Costco’s decision comes as gas prices across the country have slightly eased since June. On July 6, the national average gas price was $4.779 per gallon, according to AAA. This is down from the $5.016 per gallon peak on June 14.

However, gas prices might rise again in the coming weeks with increased summer demand.

“July is typically the heaviest month for demand as more Americans hit the road, so this trend of easing prices could be short-lived,” Andrew Gross, AAA spokesperson, said in a statement.

In May, Natasha Kaneva, head of commodities research at JPMorgan, warned in a note that U.S. retail gas prices could average $6.20 per gallon nationally by August, according to Markets Insider.

Speaking on Yahoo Finance Live, Vectis Energy Partners principal Tamar Essner said that the only thing that’s going to make a dent in gasoline or jet fuel prices is the destruction of demand. And for demand to be destroyed, prices have to go “quite a bit higher,” she added.

“What that magical number is I don’t know, because we are in unprecedented times in terms of having this build up of demand post-COVID at the same time because of stimulus and higher disposable income,” Essner said.