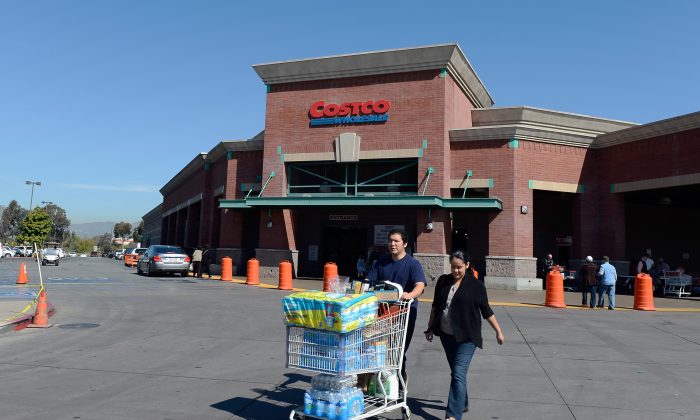 Customers push a loaded cart outside a Costco store in Los Angeles, March 12. Costco recently ranked No. 1 in a market survey due to its excellent customer experience and service. (Kevork Djansezian/Getty Images)
Business & Economy

Social responsibility rewarded by employees and customers
By Heide B. Malhotra

Bulk-retailer Costco Wholesale Corp., was ranked 22nd on the 2013 Fortune 500 list of the largest U.S. companies by revenue. Costco has more to offer than just size though, with the company leading in social responsibility.

In a report released May 17, Vision Critical, a Vancouver-based market research firm, labeled Costco a “pure play” brand after evaluating a number of factors, such as price, service, and interaction, predicting a bright future for the company.

Costco was ranked No. 1 in total, with 32 percent of those surveyed saying they’ve never shopped at Costco but would definitely consider doing so, and that they think the brand has a brighter future. Vision Critical also advised that Costco’s customer experience and service scored highly, likely due to the volume of taste-testing and product interaction that Costco offers, and that Costco should leverage this to improve it competitive advantage.

Costco is also considered a valued employer, as it pays its workers a decent beginning wage and offers them opportunities for raises and promotions over time, states a March 5 article on the Motley Fool website, which calls Costco a socially responsible company.

The article says that Costco values employee happiness, leading to higher productivity, with both higher revenue per employee and higher profit per employee than Wal-Mart Stores, which was No. 1 on the Fortune 500 list. Costco employees appreciate that their earnings can rise from a starting wage of $11 per hour to $19.50 per hour within about four years.

With the exception of an August 2012 incident in California, when comedian Joan Rivers handcuffed herself to a shopping cart inside a Costco store, there is very little negative press about the wholesale chain. Rivers was protesting Costco’s refusal to stock her book due to improper language on the back cover, according to an Aug. 8, 2012, article on the TMZ website.

So why is Wal-Mart situated higher on the Fortune list but faces more backlash over how it treats its employees? Some analysts think that the two companies are two different animals altogether. Wal-Mart is a low-cost retailer that cuts costs wherever possible, while Costco sells its products in bulk.

“Costco pays nearly all of its employees a decent living (well in excess of the minimum wage) while Wal-Mart continues to pay its workers as if their employees don’t actually need to eat more than once a week, live in an enclosed space and, on occasion, take their kids to see a doctor,” suggests an April 17 article on the Forbes website. More satisfied employees ultimately lead to happy customers.

Pricewise, Costco comes in cheaper than Wal-Mart, although one has to buy most of the products in large quantities to reap the benefit—not always convenient or possible if you live in a cramped Manhattan apartment, for instance. An April 12 article on the My Personal Finance Journey website did a comparison between the two retailers, and five out of six products ended up cheaper when bought in bulk at Costco, while the sixth was the same.

Costco’s earnings for the previous three quarters ending May 12 rose 29 percent to $1.42 billion.

Costco’s sales consist of three components: store sales, membership fees, and gasoline sales. Membership fees make up a small portion of overall sales and accounted for just over 2 percent of total sales in the three months ending May 12. Gasoline sales were not reported separately.

A review of several analysts’ recommendations indicates that despite the strong balance sheet, shares of Costco (NASDAQ: COST) are still overvalued at their current level. “If you’re thinking about buying its stock but don’t want to overpay; strike that idea from your thoughts,” recommends a May 30 article on the Investopedia website.

Shares of Costco closed at $110.66 on June 4, up about 12 percent so far this year, trailing marginally behind NASDAQ’s overall 14.1 percent rise in 2013. Wal-Mart is up 10 percent this year, just slightly behind.