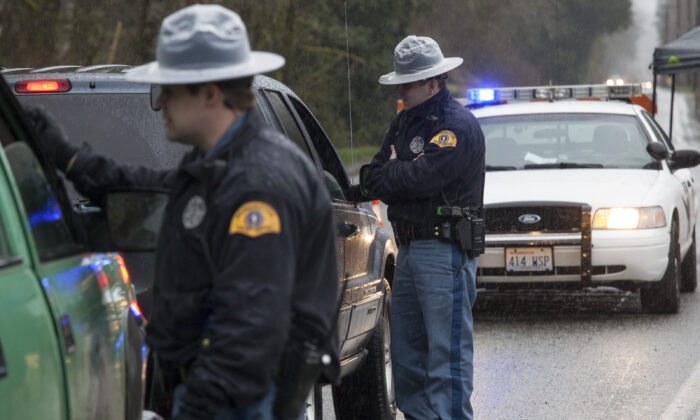 Washington State Patrol’s (WSP) decision to terminate the employment of 127 people on Tuesday for refusing to comply with Gov. Jay Inslee’s COVID-19 vaccine mandate will end up costing the state’s taxpayers millions of dollars.

For the fiscal year 2022, training costs are estimated to be about $168,000 per cadet, according to Chris Loftis, WSP communications director.

Given that 74 commissioned officers—67 troopers, six sergeants, and one captain—were “separated from employment,” in WSP’s parlance, that means it would cost more than $12.4 million to replace just those law enforcement officers who were dismissed.

Inslee announced the vaccine mandate for state workers in August.

“Monday, October 18 was the deadline for state employees to provide proof of vaccination or receive approved exemption and accommodations for religious or medical accommodations or face separation from employment,” WSP said in a Tuesday press release. “As of the end-of-business on Monday, 127 individuals have separated from employment due to the mandate.”

“We will miss every one of them,” WSP Chief John Batiste said in a statement. “I extend a hardy thanks to those who are leaving the agency. I truly wish that you were staying with us. You have my utmost appreciation for the hard and successful work that you have provided during your valued WSP careers. You will forever have our respect for your courage and your commitment in all you have done on behalf of the agency.”

In addition to the financial costs of training, the costs of recruitment, and time, will be factors for the agency in terms of making up for the loss of so many troopers at once.

“We have one academy class ongoing and two more scheduled over the next 18 months,” Loftis said. “Each class graduates anywhere from 35 to 60 troopers.”

WSP, made up of approximately 2,200 personnel in eight districts across the state, indicated it is working on a contingency plan, including resources to be moved where necessary while recruiting efforts intensify.

“As for more than 2,000 individuals who elected to stay with our agency, I am forever thankful,” Batiste said. “We must now turn our attention to making sure we deploy our resources in a manner that continues to keep our roadways safe and meets the other core law enforcement responsibilities this agency has met with honor for over 100 years.”

The remaining 53 people let go from their posts were civilian employees whose duties encompass everything from aircraft maintenance to custodial work to forensics to clerical work, Loftis said.

He added there is “no real way to quantify their group training costs,” but there definitely will be costs, making the $12.4 million projected price tag to taxpayers a floor, not a ceiling.

The contingency plan includes WSP making adjustments as needed and working to fill vacancies as quickly as possible.

One silver lining: The 127 people WSP ousted was less costly than previous estimates that the agency could lose up to 10 percent of its workforce over the state’s vaccine mandate—or 220 employees.