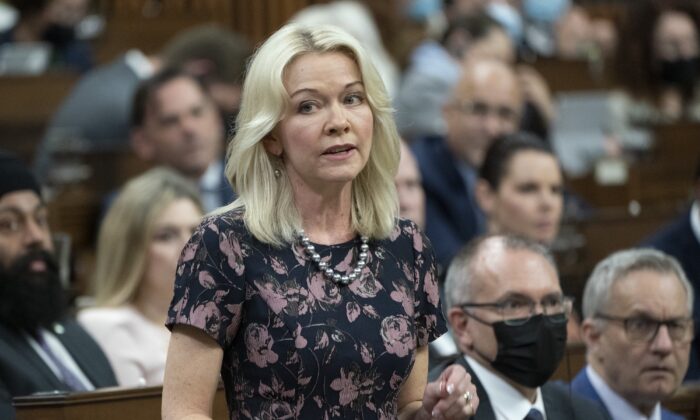 There are quite a few issues and crises—domestic, foreign, and global—currently affecting Canadians, but the most pressing concern right now is the cost of living, says the interim leader of the Conservative Party.

“Investment is fleeing, our deficit is rising, the cost of everything going up: It is really a recipe for economic disaster in Canada, so that’s our top concern,” Candice Bergen told The Epoch Times in an interview.

The federal government has taken credit for a strong economic recovery after extended lockdowns, but inflation remains at record-high levels.

Bergen singled out the price of fuel and housing as areas where Canadians are getting sorely squeezed.

“When you think that we live in a country that extracts and produces oil and gas, there’s no need for these kinds of gas prices,” she said.

The MP for the Manitoba riding of Portage-Lisgar says the first thing to do to give Canadians a break at the pump is to cut taxes. The Tories have presented motions along this line in recent weeks, but the Liberal government hasn’t accepted the suggestions. Some Tory leadership candidates are also running on the promise to axe the carbon tax.

On housing, Bergen said the solution is to “unleash the private sector” to increase supply by removing restrictions at the municipal level, with the federal government playing a leading role in incentivizing municipalities through a “carrot or a stick.”

The Liberals have introduced the Housing Accelerator Fund in Budget 2022 to increase housing supply, which is somewhat similar to what Bergen proposes, but she said the solution is not to give more money to municipalities, it’s just to “let the builders build.”

The Accelerator Fund will consist of an investment of $4 billion over five years starting in 2022-2023, which could include “annual per-door incentive for municipalities, or up-front funding for investments in municipal housing planning and delivery processes that will speed up housing development.”

Bergen said foreign ownership should be restricted as well. Such a measure was announced by the Liberal government in their last budget, but Bergen said the policy has too many loopholes and doesn’t go far enough.

The foreign ban as currently presented will prevent non-Canadians from acquiring non-recreational, residential property in Canada for a period of two years, with exemptions for refugees, international students on the path to permanent residency, and individuals with work permits.

If the Conservatives share some general ideas with the Liberals on boosting supply and foreign ownership, they don’t on other measures stimulating demand, with Bergen criticizing programs for first-time homebuyers such as one where the home buyer shares a mortgage with the government.

“The government has introduced more bureaucratic programs that have virtually no uptake. Their programs are actually an embarrassment,” said Bergen.

Bergen also said the government has a serious transparency issue, citing recent developments such as the invoking of the Emergencies Act, withholding the Winnipeg lab documents, or a recently-adopted motion to modify the sitting times of the House of Commons.

When appearing in front of special joint committees or in the House of Commons, the Liberals have so far asserted cabinet confidence or avoided some tough questions regarding the public order emergency that was declared on Feb. 14 to deal with cross-country protests and blockades demanding the lifting of COVID-19 mandates and restrictions.

Bergen was elected interim leader after Erin O’Toole was ousted at the beginning of the three-week protest movement. O’Toole took an ambiguous stance towards the protesters while other MPs like Bergen, deputy leader at the time, were vocal in their support.

To express her party’s views on the invoking of the act and the current reviews, Bergen quoted the creator of the act, former cabinet minister Perrin Beatty, who said recently “Wherever you have extraordinary powers, there must be extraordinary accountability.”

Bergen says using the act was an overreach, and if it wasn’t, the Liberals have to tell Canadians why that is, and what evidence there was to prompt the invocation.

“To now again use the excuse of cabinet confidence is just another cover-up by the Prime Minister,” she said.

The Conservatives are also not satisfied and won’t participate in the Liberals’ plan to launch a special committee made of security-cleared MPs to review the documents on the Winnipeg National Microbiology Laboratory’s firing of scientists Xiangguo Qiu and Keding Cheng in 2021 after being escorted from the lab by police two years prior.

“We want to see the documents presented in the way that Parliament asked them to be presented,” Bergen said, alluding to the saga which saw the government take the House Speaker to court in the previous Parliament to prevent this from happening.

Bergen said the Parliament’s law clerk should be trusted to ensure that the sensitive information contained in the documents is redacted and then be made available to parliamentarians.

When asked what she thought was contained in the documents and why the government was expending so much effort to protect the contents, Bergen said she wouldn’t speculate, but questioned how scientists that were linked to the Chinese Communist Party could be allowed in the lab.

The Globe and Mail reported in May last year that Chinese military researcher Yan Feihu worked at the lab. Xiangguo Qiu also collaborated on Ebola research with Chinese Major-General Chen Wei, though she reportedly did not visit the lab.

“They were warned. From our understanding, CSIS warned the government, warned Health Canada, and those warnings were not heeded,” said Bergen.

The interim leader also commented on the recently adopted Motion 11 that extends the House sitting times, hence disturbing planned committee meetings, and which gives the government the ability to adjourn the House until September before the end of the session.

Bergen said Trudeau “basically bought himself a majority government” by forming an alliance with the NDP, which she says has the effect of “limiting the remaining opposition parties’ ability to hold his government to account.”

“It’s part of a pattern of behaviour where Trudeau runs from accountability and transparency,” she said.

The NDP, which entered into a confidence-and-supply agreement in March with the Liberals to keep their minority government in power until 2025 in exchange for investments in government programs, voted to support Motion 11.