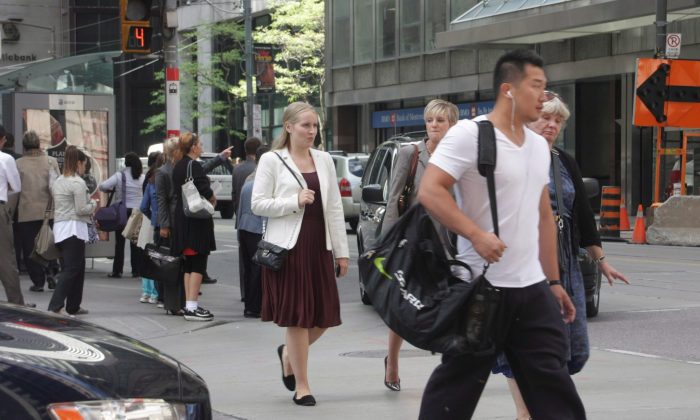 Pedestrians cross an intersection in downtown Toronto. Financial realities and lifestyle options are compelling young Canadians to live in the downtown cores of the country’s cities, a new study finds. (The Canadian Press/Colin Perkel)
Canada

Financial realities and lifestyle options are compelling Canada’s young people to increasingly choose to live in the downtown cores of the country’s cities, new research from the University of Waterloo suggests.

Moos examined Statistics Canada census data in both Vancouver and Montreal from 1981- 2006 and found that young people are increasingly living in condos or apartments near transit systems. His findings were published in the periodical The Canadian Geographer.

Moos says his findings can be applied to other cities such as Toronto or Ottawa.

“Some of the factors that we see behind this are not people who are just looking for a more walkable environment. Demography for young people has changed. They are delaying child-bearing, they are going to school longer, not as many are getting married,” he says.

The trends are starting to be recognized by city planners although have yet to be acknowledged by politicians, according to Micheal Roschalau, president of the Canadian Urban Transit Association.

“I see it happening in the planning community, but where it really has to break through is on the political level. At the moment it’s businesses as usual: widen the roads and build highways,” he says.

Roschalau adds, “Millennials want to be in walking or biking distance for work, shopping, or recreation, or else to be able to have easy access by bus or by train. For them it has to be fast, efficient, comfortable or integrated, and that presents some challenges for redevelopment of downtowns.”

Moos’ findings are similar to a trends observed by the Canada Mortgage and Housing Corporation (CMHC), which estimates that the number of condominiums in Canada has grown to almost 1.6 million. At the same time CMHC research shows occupancies of the spaces can vary widely.

“There are now many living on their own or sharing accommodations, “said Ian Melzer, manager of housing needs at CMHC. He adds that now “many young people are moving back with their parents, especially 25-30 year olds.”

Glenn Miller, vice president for education and research at the Canadian Urban Institute, warns that the trend poses a major long-term problem with the potential for higher vacancies if there are insufficient numbers of people to support the purchase or rental of the apartment spaces.

“Do we have the demographics to support people wanting to be in the smaller units? It is generally acknowledged that when people want to settle down the 700 square foot apartment isn’t going to be sufficient,” said Miller.

However, for now at least, Miller agrees that “the downtown attraction is pretty pervasive.”

Kaven Baker-Voakes is a freelance journalist based in Ottawa.