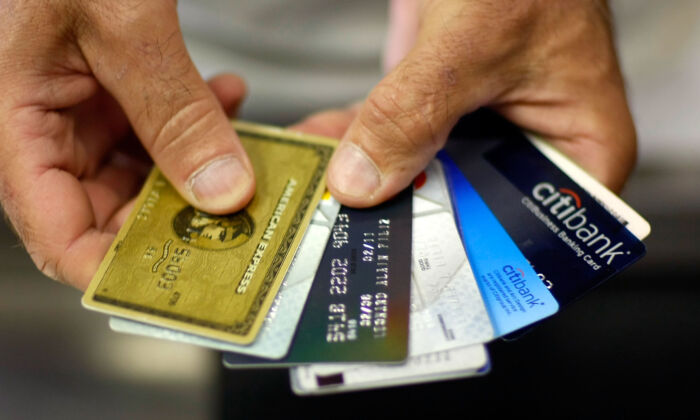 Alain Filiz fans out his credit cards as he pays for items at Lorenzo's Italian Market in Miami on May 20, 2009. (Joe Raedle/Getty Images)
Economy

Economists have pasted many labels on today’s economic landscape: recession, stagflation, or an economy that’s transitioning to slower growth.

Whatever the professionals and public policymakers call the U.S. economy, the data and consumer surveys show that households are enduring a cost-of-living crisis. Everything is piling up for consumers coast to coast, from soaring food prices to rising utility bills to increasing shelter costs.

Although the White House claims that the country isn’t facing an economic downturn, it feels like a recession for millions of households nationwide.

The American people have made it clear that they’re financially struggling.

Inflation and being able to pay for food and groceries continue to be top concerns for U.S. households, according to Primerica’s second quarter 2022 Middle-Income Financial Security Monitor report. Sixty-one percent anticipate the economy will be worse off over the next year, and 71 percent are preparing to cut back on nonessential spending.

Millions of Americans are living paycheck to paycheck, too.

According to a new LendingClub survey, 61 percent of Americans were living paycheck to paycheck in June, up from 55 percent a year ago. Thirteen percent reported spending more than they earned in the past six months.

“What a difference a year makes. Last summer we were all worried about how quickly the economy would recover. Now, as inflation continues its upward swing, consumers are finding it more difficult to manage spending and are eating into their savings as financial pressures mount,” Anuj Nayar, LendingClub’s financial health officer, said in a statement.

Electricity costs have become so outrageous that 20 million households can’t afford to pay their monthly utility bills. Increasing power costs have led to a collective electric bill of about $16 billion in June, double the $8 billion from December 2019.

The Federal Reserve Bank of New York’s July Survey of Consumer Expectations revealed that 38 percent of households anticipate that their financial situation will be worse off over the next year.

This bearish sentiment on their finances and the broader economy has a growing number of Americans anticipating going into debt for the rest of the year and heading into 2023 amid elevated living costs.

According to a recent LendingTree poll, 43 percent of U.S. consumers expect to take on new debt over the next six months. They aren’t using credit cards or lines of credit on frivolous items. The survey found that most consumers are using credit for necessities, including shelter (30 percent), unexpected emergencies (26 percent), and health care expenses (25 percent).

“Services like Klarna and AfterPay are allowing people to buy everything from groceries to electronic items on debt,” Nddie told The Epoch Times. “This isn’t an ideal scenario, because piling up debt to fund your purchases is never a good option.”

Many shoppers are utilizing BNPL, especially during the busy and costly back-to-school shopping season. New TransUnion research found that more than one-third (37 percent) of consumers have already taken out or plan to take out BNPL loans to pay for back-to-school purchases.

Families are also adjusting their spending behaviors, as 55 percent are expecting to spend more on school supplies, from apparel to electronics.

“Families are especially hard hit by inflation, and back-to-school shopping represents a significant cost on top of everyday expenses,” Cecilia Seiden, vice president of TransUnion’s retail business, said in a statement. “The ability to spread those payments out over time, interest-free, is a very attractive option to parents and students who are already stretched thin financially.”

But while BNPL plans are ubiquitous during this time of the year, a new report suggests that inflation and recession risks mean the credit instrument isn’t going anywhere.

A new report from Morning Consult found that consumers are expecting goods and services to cost more, so they’re turning to BNPL methods “to pay for some of them.”

“The consistency with which U.S. consumers have used BNPL to fund their purchases throughout 2022 indicates that the payment form may be helping to keep their price sensitivity and substitutions at bay, and should be viewed as an indicator of the staying power of BNPL,” the report states.

Consumers Are Changing Their Buying Habits

Consumer demand trends have been altered in multiple sectors of the economy, from housing to gasoline.

According to industry leaders, the real estate market has slipped into a recession.

Although gasoline prices have fallen below $4 per gallon, motorists haven’t been lured back to the pump. The current Energy Information Administration seasonal four-week rolling average consumption rate is the same as it was in 2020, as demand hovers at about 9 million barrels per day.

A July survey by AAA showed that 64 percent of Americans adapted their driving or lifestyle habits because of surging fuel prices. Some of the changes included driving less, combining errands, and reducing shopping or dining out.

Consumers are exploring multiple avenues to diminish the inflation pain.

A U.S. News & World Report Inflation Shopping Habits Survey conducted in late July showed that 58 percent of Americans are searching for coupons at least once a week. Nearly half (44 percent) of consumers are using apps and online tools to save money. The high cost of living has already affected consumers’ holiday shopping plans, with 52 percent planning to spend less on gifts this year compared to last year.

More Americans are finding basic food staples more expensive, households are trimming their nonessential spending, and shoppers are turning to generic brand labels to save money.

U.S. retailers may need to brace for a transformed shopper heading into the typically busy fourth quarter. Walmart and Target have reported bloated inventories due to sliding demand, forcing these retail giants to slash prices, cancel billions of dollars in orders, and slash the number of shipping containers.

The state of the consumer may deteriorate heading into the new year. More debt, less savings, and subzero wage growth are all factors that may weigh on Americans in 2023. Could unemployment be the next domino to fall?