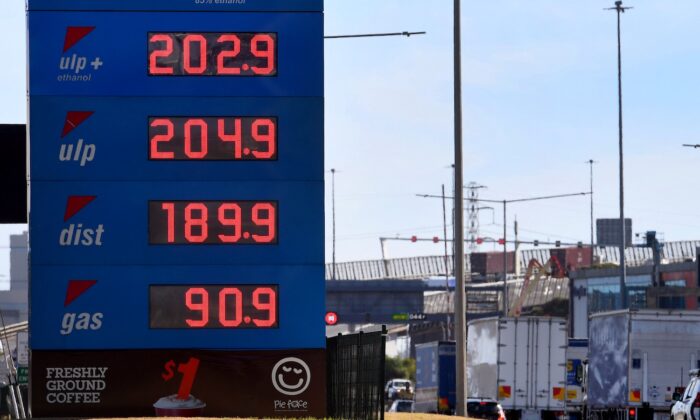 A sign outside a petrol station shows the price of petrol breaking through the two Australian dollar (1.46 USD) a litre mark in Melbourne, Victoria, on March 3, 2022. (William West/AFP via Getty Images)
Australia

Cost of Fuel for Australians Rises to $100 a Week

Cash-strapped Australians filling up at the fuel pump paid an extra $5 (US$3.50) a week over the course of the past three months, according to new figures.

Typical weekly household transport costs also grew to $412.21 in capital cities and $342.98 in the regions.

The fuel costs factor in the temporary halving of the fuel excise rate, inflation running at 6.1 percent annually and global price shocks stemming from the war in Ukraine.

Michael Bradley, managing director of the peak motoring body, said it was the first time the national weekly fuel cost average had passed $100 since the index’s inception in 2016.

“Despite the temporary excise cut, fuel prices are rising and continue to be a significant contributor to cost of living pressures across both regional and metropolitan Australia,” he said.

The 22-cent cut to the fuel excise is due to end next month, with the Albanese government strongly indicating it won’t be extended.

The national average for petrol prices fell to 173.6 cents a litre last week, its lowest point since Easter.