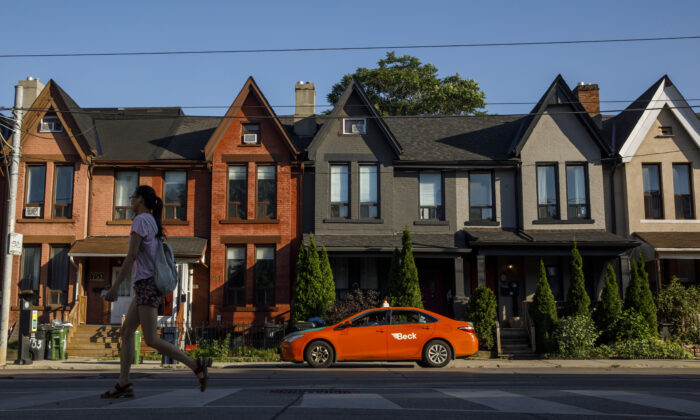 A person walks by a row of houses in Toronto on July 12, 2022. (The Canadian Press/Cole Burston)
Canada

Toronto residents looking to rent or own a new home will face higher expenses after city council voted this week to significantly increase development charges, which will potentially add tens of thousands of dollars to the cost of building new homes.

Development charges are one-time fees collected by municipalities when a building permit is issued and are used to subsidize the cost of developing the public infrastructure needed to provide municipal facilities, such as roads, transit, water, sewers and community centres along with fire and police services.

As a result, developers hoping to build detached or semi-detached houses will have to pay $137,040 in development fees, a substantial increase from the current charge of $93,978. To build an apartment with two or more bedrooms, the charge will be bumped from $55,012 to $80,218.

The city said the increase in fees will be phased in through May 2024 and is necessary to pay for the infrastructure needed to service new homes.

A recent change in provincial legislation forced Toronto to review its development charges after a report from municipal staff showed the city is facing a $67 billion capital bill over the next 10 to 20 years with $14.9 billion of that amount resulting from the costs of new development, The Globe and Mail reported.

“The development charges that are applied … don’t even begin to pay for the infrastructure that we have to put in place to deal with a growing city,” he said during the July 19 council meeting.

“But we have to achieve a balance, between that and impact on the affordability of new homes.”

However, critics warn that increasing development charges will result in less construction amid a housing crisis and that costs will be shifted to new residents to avoid increasing property taxes for existing homeowners.

“The city budget should be shared more equitably between those property owners who have lived in Toronto for decades and newer residents.”

During the July 19 council meeting, a motion from councillor Ana Bailão was passed that will waive the increased charges on the second, third, and fourth residential units on a single property, provided there are no more than four units on the lot.