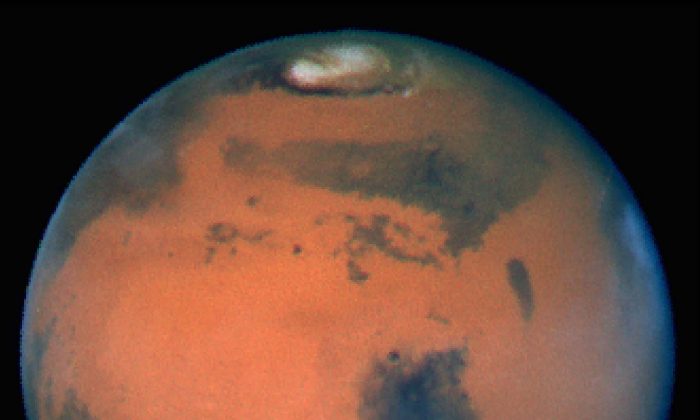 Lily Kelly
Lily Kelly is an Australian based reporter for The Epoch Times, she covers social issues, renewable energy, the environment and health and science.
View profile
biggersmaller
Print

Scientists from the Australian National University (ANU) have developed a new and cost-effective deep scanning technique that can provide a window into the interior of the planets in Earth’s solar system.

The new approach uses only one on-planet instrument and has provided ANU seismologists with a scan of the Red Planet’s interior, including its core. Dynamo theory suggests that the core generates and sustains a planet’s electromagnetic field—what shields the creatures on a planet from cosmic radiation.

Electromagnetic fields are crucial for survival; however, Mars no longer has one, except for relatively small patches of magnetized crust. Consequently, developing an understanding of how and why Mars lost its field is an investment to ensure Earth’s safety and to advance terraforming endeavours on the red planet itself.

The researchers hope that their approach can be useful for investigations of other planetary bodies and their interiors, including the moon. However, it should be noted that although this study introduces a cheaper and more innovative approach to planetary scanning, it isn’t the first to scan and measure the Martian core. The first research team to prove the existence of the core did so in 2021.

Differences Between the Studies

In an email to The Epoch Times, the lead author of the study, Sheng Wang PhD, said that the 2021 team used direct reflections of seismic waves from the core-mantle boundary (CMB) to confirm and measure the core.

Wang said that specifically, the 2021 research team measured shear wave reflections or ScS. Shear waves or elastic waves are a form of seismic wave—which travel through or over land and are typically caused by earthquakes. They move through the body of an object, not through the surface, and can only move through solids.

Wang said that the 2021 study employed different datasets and methods, using records of seismic waves in early time windows after the origin of a Marsquake and ScS reflections due to local patches of CMB.

The ANU team measured a range of signals or “echoes” that are emitted by seismic waves. These echoes gradually change as they reverberate through the planet’s interior, piercing through and bouncing off the core. Wang said that the ANU study uses records in much later hours after the origin of a marsquake and cross-correlation analyses of the cross-correlation of late coda, which sense the CMB globally.

The data used in both studies was collected by instruments attached to NASA’s InSight lander, which has been gathering intel on Martian weather, the planet’s interior, and marsquakes since its landing in 2018.

Using Earth as an example, Wang described the processes which transform “echoes” into a fingerprint of the planet’s interiors. Wang said that the “echoes” are seismic-wave reverberations inside the Earth, which reverberate because of the Earth’s free surface, core-mantle boundary, and other internal structures. He said that all of these causes of reverberation could result in the partitioning of wave energy or reflection and refractions.

“Therefore, the “echoes” change with time. First, their strength/amplitude decrease when they reverberate due to energy dissipation,” he said.

“Second, the whole late coda wavefield that we used will be shaped due to the internal structure of the Earth. The energy partition, geometry, energy content in different frequency bands, etc, are shaped.”

“You can imagine that the resulting coda wavefield is like a fingerprint of the earth’s interior,” Wang said.

In an ANU news release, the study co-author, Prof. Hrvoje Tkalčić from the ANU Research School of Earth Sciences, said that in terms of Mars, these signals appear to be noisy and useless.

However, he noted that there is a similarity between the recorded signals. He said that this similarity establishes itself as a new signal and unveils the presence of a large Martian core.

“We can determine how far these seismic waves travel to reach the Martian core but also the speed at which they travel through Mars’ interior,” Tkalčić said.

“This data helps us make estimations about the size of Mars’ core.”

Tkalčić noted that the team found the diameter of the Martian core to be around 3620 kilometres (approximately 2249 miles).

What Waves Can Say

Wang said that the fundamentals of scanning planetary interiors using land vibrations, as is done in the ANU’s new approach, are similar to that of X-ray imaging.

“Well, basically speaking, the fundamental in seismic imaging of the Earth’s and planetary interiors is similar to that of the X-ray imaging of human bodies most of us have experienced in hospitals,” he said.

“Based on that, we can measure several quantities of the wave observations (time, amplitude, waveforms) to invert the targeted internal structures,” he said.

Wang said that this is the foundation for all seismological investigations of planetary interiors, while in specific uses, different types of datasets and methods/ways to process and analyze the dataset are noted.

Wang said that one specific example is to invert the distance of a reflector/boundary from a receiver, which can be done if the wave’s speed/velocity and the time it takes can be measured.

“This geometry is like an analog for studies using direct seismic wave observations,” he said.

“We mentioned that specific analog/example just to help explain what seismic imaging can be like, and many seismic imagings are not like the Velocity=Distance/Time.”

Wang said that the team obtained an estimation of the core’s size and its uncertainty by considering sets of possible interior models.

“In our method, inter-source cross-correlations, the physics and maths are different from the analog for direct seismic wave observations as explained above,” he said.

“In the inter-source cross-correlation framework, we do not explicitly have that kind of geometry of Velocity=Distance/Time.”

“In other words, the inter-source cross-correlation is a new method/way to analyze the late coda, the “fingerprint” of the Earth’s and planetary interiors, and it works with only a single station,” Wang said.

The Importance of Cost-Effective Solutions

Wang said that due to high cost, restrictions on the number of instruments available are unlikely to change in the coming decades or even within this century.

“We need an approach right now to use only a single seismometer to study planetary interiors,” he said.

Tkalčić said that the United States and China plan to send seismometers to the Moon, and Australia has ambitions to join future missions. Consequently, he said that there’s potential for further studies that use new and more advanced instruments.

“Although there are many studies on planetary cores, the images we have of planetary interiors are still very blurry,” Wang said.

“But with new instruments and methods like ours, we’ll be able to get sharper images, which will help us answer questions such as how big the cores are and whether they take a solid or liquid form.”

“Our method could even be used to analyse the Jupiter moons and the outer solar system planets that are solid,” he said.

Lily Kelly
Lily Kelly is an Australian based reporter for The Epoch Times, she covers social issues, renewable energy, the environment and health and science.