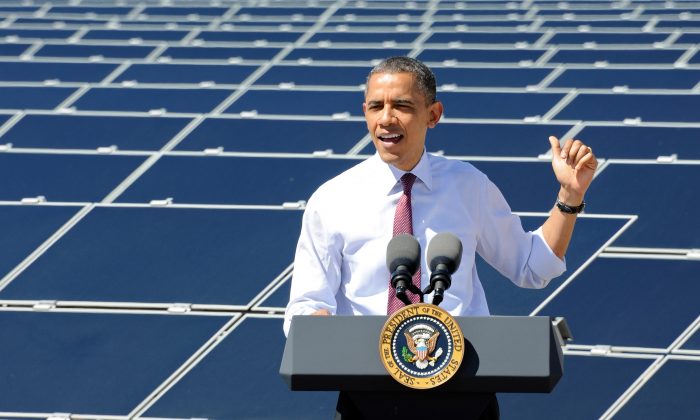 The Obama administration has been charging ahead with its efforts to control global warming since announcing the U.S. Climate Action Plan in 2013 and pledging to increase funding for clean energy technology across all agencies by 30 percent. The administration also set the ambitious goal of doubling wind and solar electricity generation by 2020.

On Sept. 16, the White House reconfirmed its commitment to transitioning America to cleaner and more distributed energy sources by announcing in a press release a number of funding initiatives equalling over $120 million to assist 15 states across the country increase their solar power activities.

Despite the successes touted by the administration in shifting America’s energy mix, the long-term cost benefits for consumers may not be there.

In 2009, the Department of Energy (DOE) Loan Program Office (LPO) doled out more than $30 billion in loans including risky guarantees to support construction of the nation’s first five utility-scale photovoltaic (PV) solar facilities, each larger than 100 MW, and loans to a variety of renewable energy projects with the goal of quickly moving the United States toward a clean energy future. At that time, commercial lenders wouldn’t risk supporting huge startup companies attempting to deploy new technology.

Several solar panel manufacturers defaulted on the loans or went bankrupt citing an inability to compete with Chinese solar companies.

As it turns out, in 2011 several solar panel manufacturers defaulted on the loans or went bankrupt citing an inability to compete with Chinese solar companies, which raised questions as to whether or not this was a responsible use of taxpayers’ money.

Yet because of this initiative, a record amount of non-fossil fuel burning electricity has been generated, and the increase in utility-scale PV solar has helped drive down the cost of power for consumers. According to the LPO, the price utilities paid to at least one solar power plant for its energy decreased by more than 60 percent between 2008 and 2014.

The White House said that solar power has grown twentyfold since Obama came into office, with the number of homes with rooftop solar growing from roughly 66,000 to 734,000, and the average cost of a solar electric systems dropping by 50 percent since 2010.

But this doesn’t tell the whole story, according to Peter Van Doren, an energy regulation expert at the libertarian Cato Institute, a public policy think tank. Van Doren argues that switching to solar is not cost-effective because the materials and processes needed to manufacture solar panels cost twice as much as conventional natural gas electricity generation.

“Using solar even in the context of a world with a $40 a ton carbon tax uses more resources than conventional natural gas electricity generation,” he commented via email, referring to a 2014 research paper published by the Energy Institute at Haas, which addresses the U.S. electricity industry.

Three weeks ago the Obama administration authorized another $1 billion in guaranteed loan money to support the scale-up of innovative distributed energy projects (small-scale energy generation that plugs into the grid) such as rooftop solar with battery storage and smart grid technologies.

The goal of the loans is to finance multiple installations of qualified facilities under a single arrangement and to remove barriers that otherwise limit access to clean energy. This strategy doesn’t have the same risk as investments in building new large-scale solar PV facilities, but the question of cost efficiency is still being debated.

The DOE has been supporting distributed energy projects with more than $10 billion in guaranteed loan authority.

Critics said even the distributed energy schemes can end up creating more losses than benefits.

However, critics said even the distributed energy schemes can end up creating more losses than benefits.

According to the Haas report, distributed generation puts the onus on customers to be responsible for generating their own electricity at a cost savings, but with a significant number of customers “self-generating,” it will force utility companies to raise rates for the electricity they still sell in order to cover fixed investments.

This will in effect develop into a “death spiral” of more utility increases, according to the report, because as more customers self-generate it in turn makes “solar PV economic for a larger set of customers who then reduce their purchases, leading to a greater revenue shortfall and another rate increase, and restarting the cycle.”

The distributed generation strategy threatens the viability of the utility, the report states. Moreover, it argues that the social welfare gain of this trend is still not clear because the cost of solar PV electricity even in sunnier areas is about $0.20/kWh, which is “more than double the full cost of gas-fired generation including a greenhouse gas cost of $40/ton.”

So why are they doing it?

“Don’t know their thinking,” said Peter Fox-Penner, a principal expert in energy and environmental policies at the Brattle Group. “But note that loan guarantees for project demonstrations like this have a very different role than loan guarantees for new manufacturing technologies.”

He said the loan guarantees being used for distributed generation leverage greater private investment in deployment of technologies without the technology development risk.