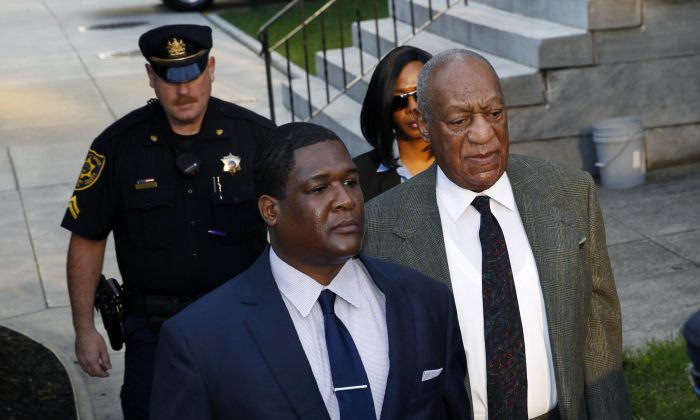 Bill Cosby, right, arrives for a hearing in his sexual assault case at the Montgomery County Courthouse in Norristown on Nov. 2, 2016, Pa. (AP Photo/Mel Evans)
US

Cosby Lawyers Say Comedian Is Too Blind to Defend Himself

NORRISTOWN, Pa.—Bill Cosby’s eyesight has deteriorated to the point where he cannot identify his accusers in photographs or otherwise help with his defense, his lawyers said Wednesday as they waged a multi-pronged effort to get the sexual assault case against the 79-year-old comedian thrown out.

His attorneys also portrayed Cosby as a political pawn who is being prosecuted only because a suburban Philadelphia district attorney used the public furor over the comic to get elected last year.

And they renewed their argument that Cosby’s lurid 2005 deposition from a related lawsuit should not be admitted at his trial, saying he answered questions under oath only after being assured he would not be charged with a crime.

Cosby leaned back in his chair as his lawyers made their case to a judge at the pretrial hearing.

The “Cosby Show” star once known as America’s Dad is scheduled to go on trial in June on charges he drugged and molested Andrea Constand, a former Temple University employee, at his home in 2004. He could get 10 years in prison.

Cosby has said the encounter was consensual. He is free on $1 million bail.

Dozens of additional accusers have come forward, including 13 women whom prosecutors want to call as witnesses at the trial to show that they were drugged and violated in similar fashion. Cosby’s lawyers are fighting that strategy.

Defense attorney Angela Agrusa argued that prosecutors unfairly prejudiced Cosby by waiting a decade to pursue Constand’s complaint. The defense said Cosby has memory problems and is also legally blind, presenting a medical report that said he is blind in his right eye and has glaucoma in both eyes.

“In the materials they turned over, the photographs, Mr. Cosby cannot look at a photograph or any evidence and help his counsel or explain who those people are,” Agrusa said.

However, prosecutors said Cosby himself caused the delay by fighting efforts by The Associated Press — in 2006 and again in 2014—to unseal his testimony in Constand’s 2005 lawsuit. Prosecutors said that it was not until a judge unsealed the material last year that they learned that Cosby had admitted to a series of affairs and acknowledged obtaining quaaludes to give to women before sex.

“He had never admitted to using powerful drugs to facilitate sex with women. That’s a big deal,” Deputy District Attorney Robert Falin said. “In our case, it goes to what exactly did he give to Andrea. … I think any reasonable prosecutor would have taken another look at the case.”

Cosby’s lawyers have also argued that he sat for the deposition only after then-District Attorney Bruce Castor promised he would never face arrest in the Constand case.

Cosby’s attorneys are using that supposed promise to try to get the case thrown out or, failing that, to keep the deposition from being used at his trial. The judge did not immediately rule on the issue.

They are also focusing on the campaign battle between Castor and the current district attorney, Kevin Steele, in last year’s election in Montgomery County. Steele ran press releases and TV commercials attacking Castor for not prosecuting Cosby.

Steele made Cosby a “pawn in that election,” Agrusa argued.

“His cause celebre became attacking Mr. Cosby, stating publicly that his opponent had not been aggressive enough, had not done his job,” she said. “And now he’s in a situation where he’s got to act on it.”

At another point, Agrusa said: “My client is not a meme. He’s a human being. And his rights have been trampled by ego and ambition.”