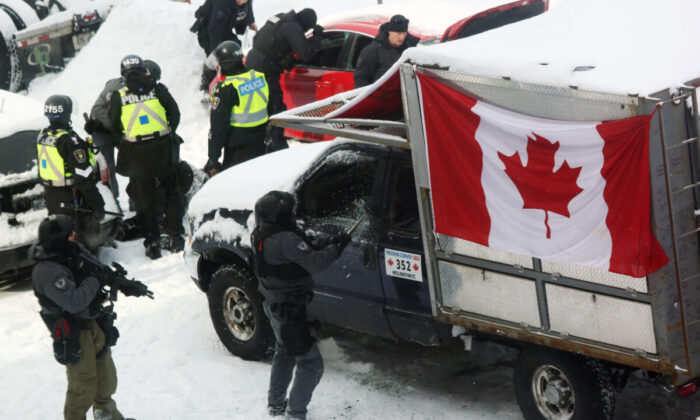 A police officer smashes a truck window as police deploy to remove protesters in Ottawa on Feb. 19, 2022. (Dave Chan/AFP via Getty Images)
Viewpoints

The Liberal government’s case for invoking the Emergencies Act in response to the truckers’ Freedom Convoy protests last February is falling apart and the formal inquiry into the use of the act hasn’t even begun yet. We are starting to see why the government repealed its own act mere days after invoking it and before the Senate would be able to debate it.

The streets of Ottawa had barely been cleared of protesters before government ministers and officials started desperately trying to make their case for having invoked the most powerful piece of legislation in the government’s arsenal.

Claims of everything from roving rape gangs, to attempted arson, to the presence of firearms among the protesters were all made, and they are all disproved.

Public Safety Minister Marco Mendicino was caught misleading Parliament multiple times as his claim that police forces had asked the government to invoke the Emergencies Act was refuted by police forces.

The revelation of a possible breakthrough in negotiations with the protesters being ignored by the Trudeau cabinet is the most damning of all to date.

The Emergencies Act is only supposed to be used as an absolute last resort by the government. It is a form of martial law that suspends the civil liberties of citizens to deal with an emergency. No other piece of legislation requires the government to hold a formal inquiry over its use as the Emergencies Act does. The policymakers who crafted the act understood just how serious the invocation of such legislation was, even if our current prime minister doesn’t.

Court documents indicate cabinet was informed over 24 hours before the Emergencies Act was invoked that the City of Ottawa was on the brink of a breakthrough in negotiations with the protesters. Lawyer Keith Wilson, who took part in representing the protesters, has corroborated the claim.

If the police didn’t need the Emergencies Act to deal with the Freedom Convoy and if the situation was on the brink of being defused through negotiation, why was the government so hellbent on invoking the act?

There are a few reasons that could be behind this. Much of it is linked to pride and insecurity on the part of the prime minister. Not good reasons to suspend civil liberties, to say the least.

If negotiators from the city of Ottawa had managed to bring the convoy protest to a peaceful end, it would have embarrassed the Trudeau government. From the very beginning, the government refused to communicate with the protesters on any level. In fact, they often poured fire on the flames as they labelled the participants as racists and seditionists.

People were starting to ask why the government hadn’t even made a token effort to defuse the situation with negotiations. Ottawa’s mayor had already negotiated with some of the protesters and convinced them to move out of a residential area. If a municipal government were to succeed in bringing the protests to a close altogether, the federal government’s intransigence in communicating with the protesters would be questioned even more.

Another reason the government didn’t want to back off on using the Emergencies Act is that they had already set the ball rolling. The move was already controversial, and a deal had been struck with NDP Leader Jagmeet Singh. Putting the act back on the shelf could look like the government had begun the process in error. Humility and admitting errors are not exactly hallmarks of the Trudeau government. They likely felt they had to push the act through if only for a couple of days on a point of principle.

Prime Minister Justin Trudeau is a man desperate to make himself more than a footnote in Canadian history. Pierre Trudeau will never be forgotten for his “just watch me” comment during the October Crisis in 1970 when asked how far he would go in reducing civil liberties. As a prime minister with back-to-back minority governments under his belt, Justin Trudeau has had a hard time working under the shadow of his father. He desperately wants his own “just watch me” moment and he tried to use the Freedom Convoy protest to create it.

The October Crisis involved a terrorist group that kidnapped and killed people. The convoy protest was a singular and disruptive event, and there have been other significant protest movements for other causes, but it really can’t be compared to the October Crisis. Especially now that it appears that negotiations to end the protest were nearing success before the Emergencies Act was invoked.

The documents recently released in court were heavily redacted. There’s still more to this story to be revealed.

The Emergencies Act inquiry begins in September. It is looking unlikely the inquiry will find that the invocation of the act was justified.