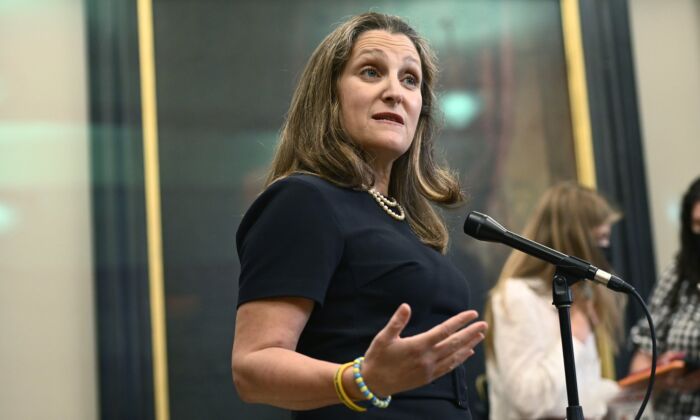 Deputy Prime Minister and Minister of Finance Chrystia Freeland speaks to reporters at the Parliament Hill in Ottawa on June 23, 2022. (The Canadian Press/Justin Tang)
Viewpoints

While the COVID-19 pandemic is ever so slowly moving into the rear-view mirror for Canadians, the economic fallout from the pandemic measures still looms on the horizon.

The whiplash effect through the economy due to on-and-off lockdowns has led to instability that will take years to settle. The cost of living is skyrocketing along with public debt as the federal government tries to borrow and spend its way out of the crisis. The government must get serious about responsible fiscal management soon. If the recently imposed luxury tax is indicative of the depth of the Liberals’ plan to bring about fiscal order, Canada is in some serious trouble.

The problem with luxury taxes is twofold. Luxury taxes never raise as much money as they were intended to, and they contribute to social division where they are imposed.

Luxury taxes are gimmicky tools to create the impression that the state is trying to spread wealth through redistribution. The term “fair share” is constantly trotted out while ignoring the reality that Canada’s progressive income tax system already imposes a much higher marginal tax rate upon higher-earning citizens. When will the “fair share” ever be enough?

When responding to questions on the tax, Finance Minister Chrystia Freeland said, “I think it is entirely reasonable to say to someone who has $100,000 to spend on a car or a plane, or $250,000 to spend on a boat, ‘You need to pay a 10 percent tax to help everybody else.’”

That’s a nice way of saying we need to punish the successful.

The luxury tax is expected to raise $163 million per year, though it likely won’t. Even it if did, the funds would amount to about 0.14 percent of the annual federal budget deficit of $113.8 billion. That’s not even enough to call a drop in the bucket.

How many of the people who will be hit by this new tax are of the ultra-rich, anyway?

Many specialty sports cars and larger trucks creep over the $100,000 mark in price and most of the purchasers aren’t multi-millionaires.

If a couple has worked and saved their entire lives and sold their home so they could retire on a boat, should they be nailed with an extra tax for doing so?

A small private plane isn’t a necessity, but one doesn’t have to be a billionaire to indulge in one. Many people with moderate incomes enjoy flying as a pastime. Hitting them with an extra 10 percent in expenses could drive them out of the practice, though.

As middle-income people eschew boats and planes due to luxury taxes, it will be the workers and businesspeople who provided services to them who will suffer. Small airfields and marinas employ thousands of people, from mechanics to salespeople to workers in hospitality services. Those jobs will be cut.

What about the truly ultra-rich with the giant yachts and private jets? They will of course purchase and register their luxuries outside of Canada. The Bahamas will be more than happy to moor those big boats while foreign nations will be eager to service and store luxury aircraft. Capital doesn’t recognize borders.

It’s not as if taxing the rich hasn’t been tried in developed nations before. In the 1990s, a dozen European countries imposed punitive wealth taxes upon their citizens under the guise of making the wealthy pay their fair share. The taxes backfired, and today only three nations still maintain such taxes. The rest were forced to admit errors and repeal the taxes. In France alone, an estimated 42,000 millionaires fled the country due to wealth taxes. Whether one likes millionaires or not, it’s undeniable that their spending helps power the economy. Losing tens of thousands of them only hurts the working class.

The only thing that will substantially increase government revenues right now is robust economic activity. We need to see people participating in the domestic economy through purchases and business development. But the federal government is discouraging this sort of growth by fostering class divisions and encouraging the wealthy to take their money elsewhere. Why should a person of means consider investing in a country where they will be vilified and punished for success?

The government has some difficult and unavoidable economic decisions to make. They can’t continue this course of deficit spending for much longer. Spending cuts must be made, and taxes may need to increase for the middle class. Tough medicine to take and it won’t be popular.

Instead of facing fiscal reality, the Liberals are virtue-signalling with things like luxury taxes while their economic house of cards is approaching collapse. The consequences of the government’s avoidance of fiscal responsibility will be dire for us all.

The politics of envy may score short-term points among some sectors of the electorate, but they don’t balance budgets.