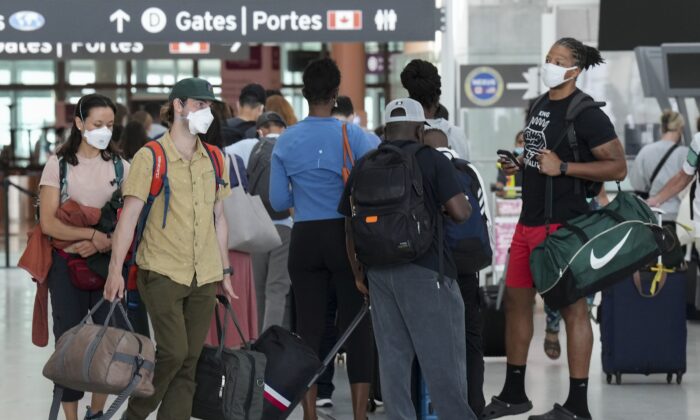 People line up to go through security screening at Pearson International Airport in Toronto on Aug. 5, 2022. (The Canadian Press/Nathan Denette)
Viewpoints

While questions posed to the government over COVID-19 policies often were rebutted with the dismissive response of “follow the science,” testimony in court documents obtained by The Epoch Times indicates that the government didn’t follow science at all, particularly when it came to imposing vaccine mandates upon travellers.

Four lawsuits have been launched in Canada challenging the travel mandates. While the mandates have been suspended for now (barring international arrivals), the testimony is continuing, and it is making it evident the government’s motivation behind the travel mandate was political and ideological rather than protecting public safety.

Jennifer Little is a senior bureaucrat with Transport Canada, and she was tasked with drafting the policy for the vaccine mandate placed on travellers. Under questioning, Little made it clear that neither she nor members of her team had any scientific qualifications, yet she made selective judgment calls on what she considered valid scientific data or not. Little has a BA in English, making her more qualified in communications than in scientific policy development. It appears her appointment to the role may have been based on her ability to sell the policy rather than her ability to craft policy based on science.

For example, Little chose to dismiss a Public Health Agency of Canada document that reviewed the issue of in-flight transmission of the virus SARS-CoV-2. She said the data was not useful to support her policy development. In other words, she was cherry-picking data to support her policy rather than creating a policy with the support of the data.

Little prepared a briefing for Transport Minister Omar Alghabra shortly before the travel mandate was imposed that stated the policy would be “world-leading.” In reality, Canada was an outlier in imposing such a policy, and when cross-examined in court, Little couldn’t clearly explain why or how Canada’s policy was “world-leading.” That is because she was providing the minister with talking points rather than analysis with her briefing. She never expected she could be called upon later to explain that claim.

The federal government does employ well-qualified epidemiologists, but it appears their advice was ignored when it came to the travel mandate policy. Dr. Lisa Waddell of the Emerging Sciences Group at the Public Health Agency of Canada (PHAC) reviewed and assessed the evidence regarding in-flight transmission of the SARS-CoV-2 virus. Her report found that “the risk of being infected with SARS-CoV-2 in an airplane cabin was estimated to be 1 case for every 1.7 million travellers.” Waddel testified that she considers this a low risk and that her report didn’t recommend vaccination as a requirement to travel by air.

Dr. Celia Lourenco is director general of the Biologic and Radiopharmaceutical Drugs Directorate within Health Canada’s Health Products and Food Branch. She is the person with the final authority when it comes to approving vaccines in Canada. One would think she would have been consulted on proposed mandates. Lourenco testified she had never been consulted by anybody from any level of government on the vaccine mandate for travellers.

Jennifer Little testified that neither PHAC nor Health Canada made a recommendation for the vaccine travel mandate. Then who did, and why?

One reason for the obsessive push for vaccine mandates despite a lack of scientific evidence calling for them is monetary. The federal government has taken out procurement contracts for 200 million doses of vaccine by the end of 2023. Vaccines have a shelf life, and if not enough Canadians decide to take them, the government could be faced with the politically embarrassing prospect of literally pouring upwards of billions of dollars worth of vaccines down the drain. Travel mandates put a lot of pressure on vaccine-hesitant citizens to roll up their sleeves and take a medication they were uncomfortable with.

Using a mandate to pressure citizens into taking an injection they don’t want raises some serious ethical questions. There is a PHAC policy called “Public health ethics framework: A guide for use in response to the COVID-19 pandemic in Canada,” which could have helped guide Jennifer Little when she wrote the vaccine mandate policy. But when questioned in court as to whether she had consulted it, she responded she hadn’t. Little didn’t appear to have much interest in scientific or ethical guidance when creating one of the most onerous and intrusive vaccine mandate policies on earth.

Another motivation for pushing the mandates was political. The government has consistently used the pandemic as a wedge issue and it has worked well for them. They put pressure on a minority of Canadians, then accused anybody critical of the policy of wanting to put public health at risk.

I guess in lacking ethical considerations, it made it easy for Little to dismiss any notion of allowing compassionate exemptions within the travel mandate policy. While travel mandates may have been just an inconvenience for some citizens, they were devastating to others who had to miss singular lifetime events such as funerals, weddings, and graduations. How can one compensate for missing the last visit with a dying loved one or being present when a family member gets married? You can’t.

The government wants the lawsuits based on the travel mandates dismissed, claiming they are now moot because the mandates have been lifted. Thankfully, the applicants are still pursuing this action or we would never have been able to get this vital testimony from those who created and implemented the travel mandate policy.

We must remember that the Liberals have only said they are suspending the mandates. They are purposely leaving the door open to re-imposing them.

Real and lasting damage has been wrought upon citizens by these mandates. We need the impacts of the mandates to be on the record, and people harmed by them have the right to legal recourse.

The government has been able to dodge scrutiny in the House of Commons when it comes to its policies, but it can’t hide from the courts. While many Canadians have speculated that the mandates were politically motivated rather than scientifically, they couldn’t prove it. Now thanks to four lawsuits, we can see the suspicions were justified.

The government must be held fully accountable to Canadians for its actions during the pandemic, both in the courts and at the ballot box. History is already not looking kindly upon them.