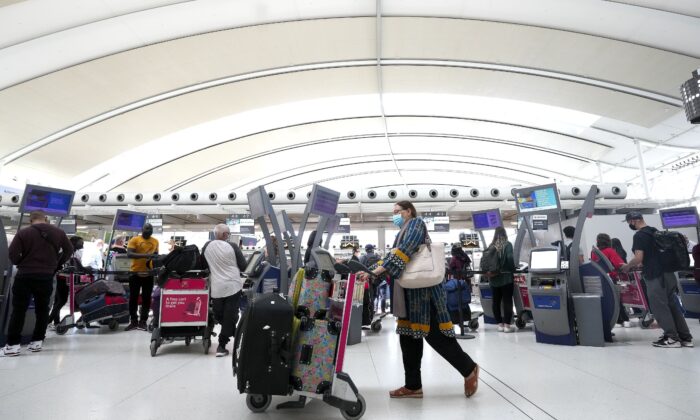 People wait in line to check in at Pearson International Airport in Toronto on May 12, 2022. (Nathan Denette/The Canadian Press)
Viewpoints

Cory Morgan: Behind Ottawa’s Fixation on Maintaining Mandates for Travellers

Canada’s government is addicted to control and uses COVID-19 to get its fix. While nations around the world are dropping all pandemic control requirements at airports, from checking vaccination status to random testing, Canada refuses to back down on entrance requirements. With the pending return of random testing requirements for visitors entering Canada, one has to wonder if the government will ever relent on the restrictions harassing travellers and crippling the tourism sector.

Vaccination has been proven to be ineffective in stopping the spread of COVID-19. Countries are realizing it’s pointless to demand that visitors be vaccinated. They are following the science, and relaxing if not completely dropping pandemic restrictions for travellers.

Even Australia, where some of the most stringent pandemic restrictions on Earth had been imposed, has dropped all its restrictions.

Canada is an outlier in stubbornly maintaining mandates and restrictions.

We still insist on imposing testing and quarantines upon unvaccinated visitors. More than 30 percent of the world is still considered unvaccinated. While they could still travel to Canada, the quarantine requirements are intrusive and expensive. Many travellers are just choosing to go elsewhere, and it is coming with a cost.

The COVID-19 pandemic has been devastating for Canada’s tourism and hospitality sectors. International tourism is down 57 percent from pre-pandemic levels. Most nations around the world are experiencing tourism booms right now as people have been waiting for two years to get out and about. Canada is lagging as we insist on maintaining restrictions. This is costing the nation billions, and it isn’t making us any safer than any other country.

Along with the fiscal expense, there is a serious social cost due to Canada’s restrictions on travellers. Many Canadians have family members and loved ones around the world who they haven’t seen in years due to pandemic restrictions and vaccine mandates. Mandatory quarantine for an unvaccinated visitor can be a deal-breaker for some people. Why cross the world to visit a country if you have to spend weeks under a version of house arrest?

Pretty much everybody in the developed world who wanted to be vaccinated has done so. Those who still refuse to be vaccinated will not be changing their minds any time soon. Some proponents of mandates have admitted that the intent was to annoy and inconvenience the vaccine-hesitant to the point where they will submit to an injection. Even if that rationale for mandates was morally justifiable, it is ineffective now.

So if mandates and restrictions are costly and offer little public health benefit, why is the Canadian government so reluctant to remove them?

There are three answers to that question. Politics, money, and spite.

Politically, the mandates have been an effective tool for the Liberal government. The majority of Canadians are vaccinated and don’t see the direct impacts of the restrictions. Restrictions and vaccines have made excellent wedge issues for the Liberals. Whenever a Conservative politician questions the mandates, they are accused of being anti-science and wanting to put citizens at risk. They can be labelled as anti-vaccination and of being conspiracy theorists. This worked very effectively in the 2021 federal election and the Liberals are counting on mandates to keep people divided.

On the monetary end of things, the government has taken out vaccine procurement contracts for nearly 200 million doses in the next couple of years. If those vaccines don’t end up in the arms of citizens, the government will face the embarrassment of literally pouring unused vaccines down the drain as they expire while billions of tax dollars are wasted. The state is well motivated to keep people inspired to take ongoing booster shots.

With the pointless random testing returning to airports, one has to wonder how many contracts have been signed by the government for tests and processing.

The worst reason of all for ongoing mandates and restrictions is vindictive spite.

While domestic travellers no longer need to prove vaccination status, vaccine mandates for truckers crossing the border remain in place. There is no evidence that truckers crossing the border are a source of COVID transmission or that they ever were. That doesn’t matter. The government has not forgiven Canada’s truckers for sparking the Freedom Convoy protests last February. The government was sent into a panic and is now facing political repercussions for invoking the Emergencies Act. Rest assured, the mandates against truckers will be the last ones ever lifted.

Airports around the world are congested, and Canada’s are among the worst of them. Checking vaccine status and random tests are contributing to the backups, but the government won’t relent. They have made mandates and restrictions a hill to die on and have dug their feet in while Canada’s tourism sector pays the price. The pride of the government trumps the scientific and economic realities of pandemic restrictions.