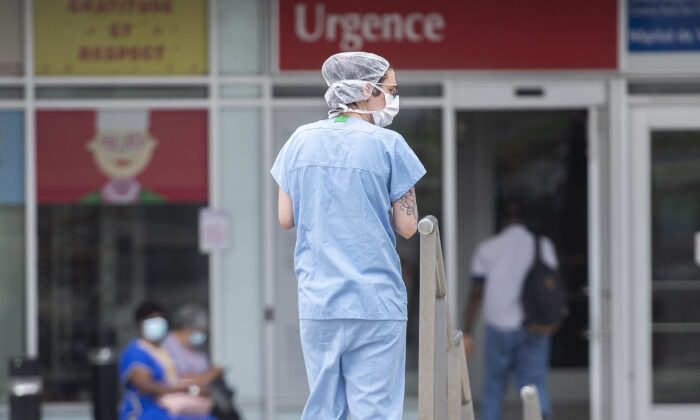 A health care worker is outside a hospital in Montreal on July 14, 2022. (Graham Hughes/The Canadian Press)
Viewpoints

Cory Morgan: As Canada’s Health Care System Teeters on the Brink of Collapse, Politicians Refuse to Utter the Word ‘Reform’

In New Brunswick, 74,000 people are on a waiting list trying to find a family doctor, while some have even desperately taken to Twitter in hopes of finding one.

In B.C., hospitals are cutting hours for their emergency rooms and primary care centres are on the brink of being overwhelmed.

In Ontario, hospitals have been forced to close their ERs and some patients have been languishing in hallways for hours waiting for emergency care.

In Quebec, the average wait for a hospital bed is an agonizing 18.9 hours, and in Alberta, rural citizens have been finding themselves without any urgent care facilities as opening hours have been cut.

The same stories can be found in every province in Canada. While provincial opposition parties try to score points on the governing parties with the issue, it doesn’t matter which party is in power. Health-care systems are failing under the governance of the NDP, United Conservative Party, Liberals, Progressive Conservatives, and Coalition Avenir Québec. The problem doesn’t have partisan roots.

The problem isn’t due to a lack of spending either. Prior to the COVID-19 pandemic, Canada spent 10.8 percent ($6,666 per person) of its GDP on health care. The average OECD nation spent 8.8 percent ($5,074 per person). Health expenditures in Canada increased 12.8 percent in 2020 due to the pandemic and have continued to rise ever since. We can’t spend our way out of this problem.

Political leaders stumble around in a state of willful blindness and refusal to acknowledge the elephant in the room. Most know the answer, but they don’t dare utter it aloud for fear of being cancelled for the crime of blasphemy against one of Canada’s most sacred of cows.

The Canadian health care system is broken and beyond repair. The entire model is fatally flawed and needs to be rebuilt.

Most of us have been told our entire lives that we are living in a nation with the best health care system on the planet. We have woven it into our national identity. Whenever we feel insecure about our southern cousins in the United States, we climb upon our high horse and point out how superior our health care system is to theirs. We even crowned Tommy Douglas as the “greatest Canadian” in a national game show held by the CBC because Douglas had crafted the nation’s impeccable health care system.

Canada’s system is far from the best on earth.

When Canada’s health-care system is measured against other nations based on cost, outcomes, and accessibility, we rank 30th and below according to the World Health Organization and other organizations. Our ranking continues to drop.

In every provincial election in Canada, health care always ranks as the number one issue among voters. So why are political leaders too terrified to address it?

Health care fearmongering is the most effective tool in any provincial party’s electoral playbook. As soon as any politician dares to even hint at health care reform, they will be accused of trying to Americanize the system and heartlessly allowing the poor to die if they can’t pay for health care out-of-pocket. Public sector unions with a vested interest in the status quo will happily amplify that myth and it’s devastatingly effective.

Canada needs leaders with the fortitude to come out and make the case for health care reform. The numbers prove the need, but the case for reform still must be articulated carefully.

To begin with, the myth of there only being two health-care systems in the world needs to be busted. The discussion needs to look beyond North America. The American system needs more universal coverage while Canada’s system is too inflexible to maintain.

Meanwhile, dozens of European models are out there offering universal coverage with public/private mixes in provision, often at a smaller cost and with better outcomes. Let’s quit talking about the two worst systems on earth and start looking at the best ones.

Canada’s health care system is on the brink of collapse. The path to reforming it is right in front of us, yet few will even discuss it, much less act on reforming it.

Canada’s system will change. It must. The only question remaining is whether we will reform the system before, or after, it fully crashes.

I fear it will be the latter despite the alarm bells sounding all around us. Denial will win the day.