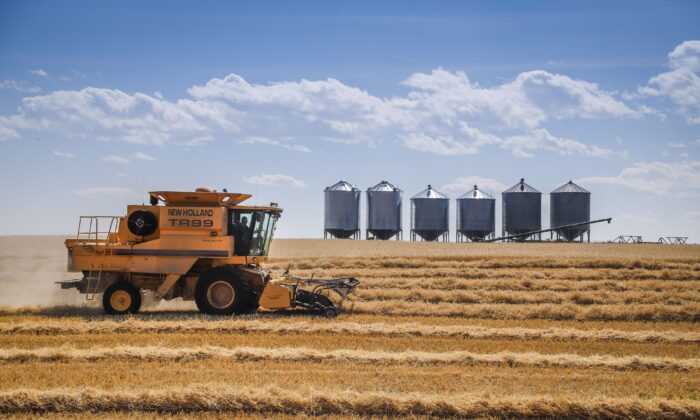 A farmer harvests a wheat crop near Cremona, Alta., on Sept. 9, 2021. (The Canadian Press/Jeff McIntosh)
Viewpoints

Although Canadians are suffering under the highest inflationary pressures seen in 40 years, the federal government appears hell-bent on increasing the cost of living further. While the Liberals usually pick on the petrochemical industry when ostensibly battling climate change, recently they’ve set their sights on the Canadian agriculture sector and fertilizer use.

The government has plans to reduce emissions from fertilizer use in Canada to 30 percent below 2020 levels by 2030, according to Agriculture and Agri-Food Canada. Such a sudden reduction in fertilizer use will be devastating to farmers and consumers alike. While the Liberals’ aspirations are clear, their path to getting there isn’t. They haven’t specified how the emissions will be reduced. Let’s face it though, the government typically has only two tools in its kit for initiatives like this. It will be either through taxation or bans, or a mixture of the two.

Provincial agriculture ministers wanted to discuss this plan with their federal counterpart at last week’s annual agricultural meeting in Saskatoon, but they were told it wasn’t up for discussion. The emissions target is set, and the government has no interest in consulting with the provinces on it. The government is focused on climate ideology and doesn’t have time to hear from the stakeholders their policy will be impacting.

The world’s population has increased five-fold since the 1930s. The only reason we aren’t seeing massive famines with such population growth is that crop yields per acre have also increased five-fold in that period. Much of the reason for the massive increase in crop yields has been the modern use of chemical fertilizers. Sudden cuts in fertilizer use could lead to catastrophic world food shortages, but our government just doesn’t seem to care.

Messing with potential crop outputs is dangerously irresponsible and will cause harm both domestically and afar. Canada is a significant world agricultural producer of key crops, from canola to wheat to lentils. Depending on the crop, the nation exports between 70 and 95 percent of the harvest. If Canada’s crop yields drop, it will have an impact on world food supplies, particularly since war-torn Ukraine will not be producing as it historically had.

The fertilizer emissions reduction plan is much like the Liberals’ plan to reduce petrochemical emissions, in that they don’t have a viable substitute for either fertilizers or petrochemicals. If farmers cut fertilizer use, crop yields will drop and there is nothing to be done about it.

Farming is a narrow-margin business, and the emission plan is sure to force many producers out of the industry. A 20 percent cut in fertilizer use with just canola, corn, and wheat would cost farmers an estimated $48 billion by 2030, according to an analysis prepared for Fertilizer Canada. Farmers can ill afford such a hit when they are already struggling under increasing carbon taxes. A farmer friend told me that producers are already planning on cutting back on capital expenditures in anticipation of emission controls. The impact on outputs will be swift.

The government can’t pretend not to know what will happen here. Other countries have already tried to walk this policy path and the outcome was costly and quick. Sri Lanka’s chemical fertilizer bans led to the overthrow of the government, while Dutch plans to reduce fertilizers have led to weeks of nationwide protests by farmers and others. How on earth can the Canadian government think this policy is going to end well?

We are being governed by ideologues obsessed with battling climate change—no matter what the cost may be. That of course is because the ideologues won’t feel the costs themselves. Justin Trudeau and many of his cabinet members never had to worry about being able to pay a grocery bill or keeping a small farm operational. They have put on blinders, and just won’t take the damages wrought by their policies into consideration.

While the impact on people will be harsh, the impact on the environment from fertilizer reduction will be negligible. Even if Canada eliminated fertilizer use completely, it would only reduce world emissions by a fraction of a percent.

This move by the Trudeau government could finally be the proverbial straw that breaks the camel’s back. Most people are fine with some environmental virtue signalling, even at a small cost. But nobody cares about the environment when they are caught between a choice of paying to heat their home and paying to feed their children due to carbon taxes and fertilizer bans.

Citizens are sensitive and grumpy. If the government moves ahead with their planned fertilizer reductions and the impacts hit Canadians hard, the protests of last February may look like a practice run in comparison to what will come. This time, the government may be pushing its ideology one step too far.