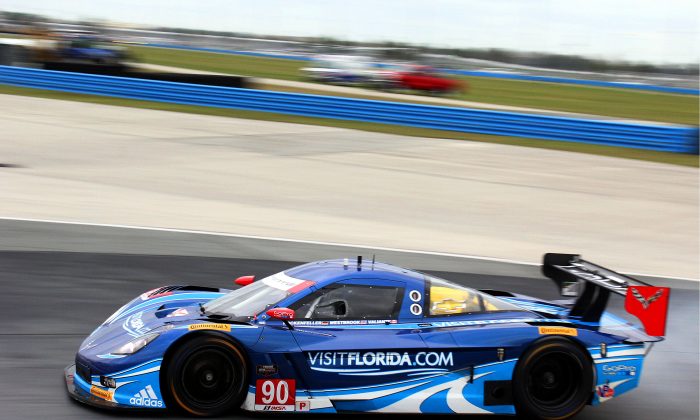 The #90 Spirit of Daytona Racing Coyote-Corvette was quickest in the afternoon session of the first day of the 2014 Roar Before the 24. (Chris Jasurek/Epoch Times)
Motorsports

‘Corvette’ Daytona Prototypes Dominate Day One of the Roar

DAYTONA BEACH, Fla.—The first day of the 2014 TUSCC Roar Before the Rolex 24 ended as it started, gloomy and chilly and with “Corvette” Daytona Prototypes lapping Daytona International Speedway faster than all the competition.

Of the six “Corvette” DPs on the entry list three were the quickest, and the other three were in the top ten. The fastest P2 car was more than a second slower; the next fastest, 1.6 seconds slower. Still, 1.8 seconds covered the ten quickest cars.

Series management still has some tweaking to do, but judging from the first day of the three-day test, the changes made after the Sebring, Daytona, and tire tests late last year—removing the DPs’ diffusers, and removing the 60 kg added to P2s—have almost closed the performance gap between DPs and P2s.

Quickest in the afternoon session was the #90 Spirit of Daytona Racing Coyote-Chevrolet “Corvette” of Richard Westbrook, Michael Valiante, and Audi DTM and endurance ace Mike Rockenfeller; which lapped the 3.56-mile course in 1:38.898 at 129.588 mph—slightly slower than the best time of the morning session.

The #90 had been second-quickest in the morning session, behind the #5 Action Express Coyote-Chevrolet driven by Christian Fittipaldi, Joao Barbosa, and Stephane Bourdais. Those positions were reversed in the afternoon session, with the #5 Action Express car lapping three-hundredths slower than the #90 and three-tenths slower than it had in the morning.

The #1 Extreme Speed Motorsports HPD ARX-03b of Scott Sharp, Ryan Dalziel, and David Brabham gained more than a second in the afternoon, yet were still more than a second off the pace. The ESM car was by far the fastest of the P2 contingent; the next best was the #42 Oak Racing Morgan-Nissan of Roman Rusinov and Olivier Pla, which finished ninth, 1.629 seconds behind the leaders.

It is still too early to determine whether the DPs and P2s are properly balanced—many of the P2 drivers and crew are new to Daytona; they might find a second per session as they learn what the DP vets already know about the track and setting up the car to work with it.

On the other hand, some of the usually quick DP teams are also breaking in new equipment—the multiple-champion Telmex-Ganassi squad is learning about its new Ford Ecoboost turbo motors. The team of Scott Pruett, Memo Rojas, NASCAR star Larry McMurray and Indy Lights champ Sage Karam advanced from 12th in the morning to fifth in the afternoon.

Chip Ganassi’s team is unquestionably one of the best; they won’t be slow forever, and when they get things sorted out, they will be favorites to win a sixth Rolex 24.

After running strong in the morning session, the Corvette RacingC7.Rs ended up fifth and sixth in class in the afternoon. Atop the GTLM roster was the #911 Porsche North America 911 RSR probably driven by factory pilots Nick Tandy, Patrick Pilet, and Richard Lietz—no official information has been released.

The Roar Before the Rolex 24 continues Saturday with 11 hours of action starting at 9 a.m. and extending through night practice which wraps up at 8 p.m. The weather is supposed to be warmer and the cars should be quicker.