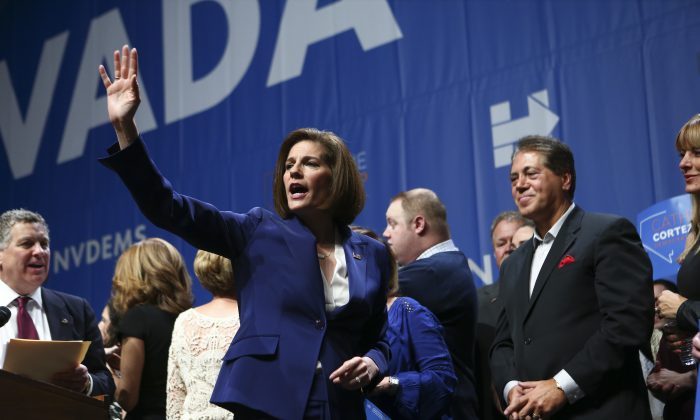 Cortez Masto Wins in Nevada, Will Be First Hispanic in Senate

LAS VEGAS—In the midst of Donald Trump’s stunning victory in the presidential election, retiring Sen. Harry Reid and his allies conjured up a blue wave up and down the ticket in Nevada that saved his seat for the first Latina in the U.S. Senate and flipped two Republican House seats back to Democrats.

Two-term former Nevada Attorney General Catherine Cortez Masto, 52, is the granddaughter of a Mexican immigrant and will become the first Latina in the U.S. Senate. Reid, 76, marshaled support from his well-oiled “machine” of unions and progressive groups and served as an aggressive attack dog on her behalf after he suffered a debilitating eye injury that forced him from the job he loves.

“It’s not just about making history,” Cortez Masto said of her win over Republican Rep. Joe Heck, which came as the state overall went for Hillary Clinton. “It is about ensuring we have a seat at the table to get something done. Don’t you think it is about time that we had diversity in the U.S. Senate? Don’t you think it’s about time that our government mirrors the people we serve every day, that it should mirror the population we represent? That’s what this is about.”

While Republicans couldn’t recruit their dream candidate, popular two-term Gov. Brian Sandoval, Cortez Masto faced a formidable foe in three-term congressman Heck, a doctor and brigadier general in the Army Reserves. The wonkish Heck, 55, showed a command of federal policy issues but came under fire from both sides of the political spectrum over his middling stance on Donald Trump.

Heck stood by the nominee until the recent release of a lewd audio recording from 2005, then called for Trump to step down, then appeared to warm up to him again in the following weeks. Ensnared by his own words, Heck avoided public events in the final days of the campaign and still hasn’t divulged who he voted for.

Outside groups poured more than $90 million into the race, thinking it could decide control of the Senate. That powered wall-to-wall TV ads that painted Cortez Masto as rampantly corrupt and Heck as an enemy of women and immigrants.

“She’s really for the people, not like Joe Heck,” 18-year-old Noemi Guigui said of Cortez Masto, who met with her for a lunch with immigrant families over the summer. “She’s one of us.”

Nevada Republican Party Chairman Michael McDonald acknowledged the GOP experienced a tough night in the state in spite of their increasingly sophisticated operation.

“We look at where we are up against—a very powerful Reid machine,” he said.

An army of anti-Trump foot soldiers helped unseat one-term Republican Rep. Cresent Hardy, who came to power in the conservative “red wave” of the 2014 election.

Hardy, 59, had the perks of incumbency but faced an uphill battle against longtime state lawmaker Ruben Kihuen in a district with a double-digit Democratic registration advantage.

“I worked very hard in this district in all the things that I promised and representing the constituents,” he said in a concession speech Tuesday, adding that he has “no regrets in what he has done and where he has stood.”

Kihuen, 36, faced a barrage of negative ads when his employer was subpoenaed as part of an FBI corruption investigation targeting Las Vegas City Councilman Ricki Barlow. But he had vocal support from President Bill Clinton and President Barack Obama, and the deep loyalty of the politically powerful Culinary Union.

“My family came to America when I was 8 years old and we came here in pursuit of the American dream,” said Kihuen, who is the first Latino elected to the House from Nevada. “Well, today that 8-year-old kid is about to become a member of the U.S. House of Representatives.”

Tarkanian has high name recognition because of his previous bids for office and his father, the late, legendary UNLV basketball coach Jerry Tarkanian. The seat leans slightly Democratic by registration but has been held by Republican Heck for the past three terms.

Tarkanian took a different tack than Hardy and Heck by standing with his Trump endorsement. That served as fodder for Rosen, a political blank slate and Reid pick who trumpeted her opponent as a tea party radical too extreme for the relatively affluent, suburban swing district.

Titus voiced pride in the army of campaign staff and volunteers who helped turn Nevada blue amid Trump’s triumph.

“We stood together, we stood tall and we were strong together. We stood up to the biggest bully and showed him what we thought of him here in Nevada.”