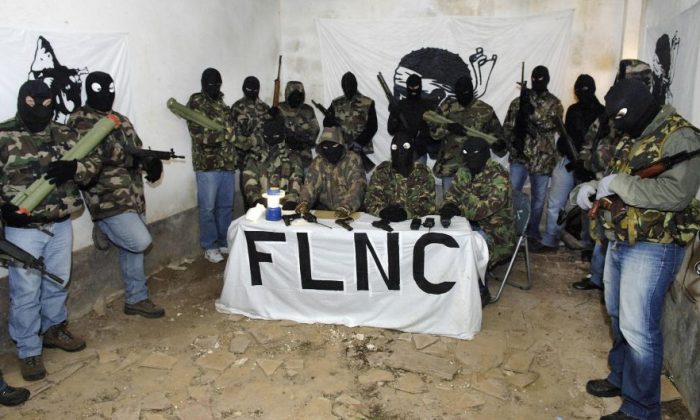 -, FRANCE: Picture taken in an undisclosed location in Southern Corsica at the end of October 2006 showing four spokesmen of the outlawed National Liberation Front of Corsica (FNLC) flanked by armed and hooded militants holding a press conference in a remote farm with two Corsican journalists (out of camera range). Corsican militants have been waging a long and low-level violent struggle for independence or autonomy since the 1970s. AFP PHOTO STEPHAN AGOSTINI (Photo credit should read STEPHAN AGOSTINI/AFP/Getty Images)
Europe

Militants on the French island of Corsica have warned the ISIS terrorist group that they will strike back for terrorist attacks.

The group, which posted a photo online with several masked men in camouflage holding rifles, call themselves the “FLNC October 22” group, which is a splinter from the National Liberation Front of Corsica (FLNC). The FLNC for decades has carried out robberies and bombings that target the French state. Nine French policemen have been killed in 34 years by the FLNC.

They warned of a “determined response, without any qualms” after any jihadist attack in Corscia, reported the BBC.

The October 22 faction released a message to Muslim leaders in Corsica to “take a stand against radical Islam” and “alert us to any excesses you notice among disillusioned youths inclined towards extremism.”

The FLNC then addressed ISIS and other jihadists, saying that “your medieval philosophy doesn’t scare us.”

It added: “You should know that any attack against our people would trigger a determined response, without any qualms… The Salafists clearly want to establish the Daesh policy among us, and we’re prepared for that.” Daesh is another term for ISIS.

“If Islamic State carries out actions on our soil, we can only win together,” the message read, according to The Local. It also called for “calm in the face of barbarity,” saying the FLNC isn’t a refuge for people seeking a racist fight.

The message comes days after men who allegedly declared their loyalty to ISIS stormed a church in Normandy and killed an 84-year-old priest. They also took hostages before they were shot and killed buy police.

In Nice, an assailant drove a truck into crowds of revelers celebrating Bastille Day on July 14, killing 84 people. In November, several attacks in Paris left 130 people dead. ISIS claimed responsibility for the attacks.

Patrick Calvar, the head of France’s internal security agency, said far-right groups have been gathering arms to carry out their own attacks. He predicted that in France, there would be a “confrontation between the extreme right and the Muslim world,” The Local reported.

“Where is the spark going to come from that will light the powder, transforming France into an uncontrollable country where groups take up arms and hand out their own justice?” he asked.