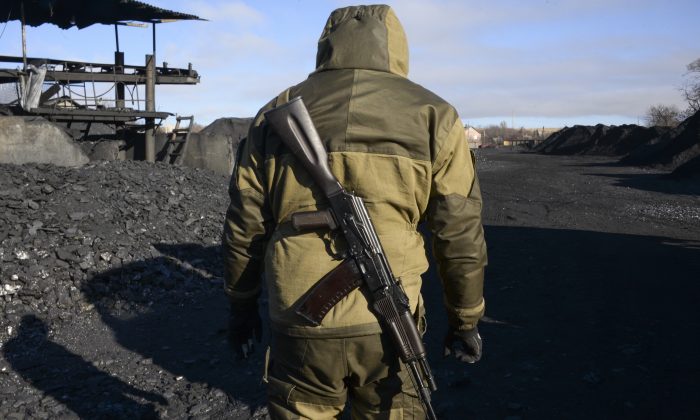 A pro-Russia rebel patrols an illegal coal mining warehouse in Torez, eastern Ukraine, on Nov. 20, 2014. As battle raged in rebellion-wracked eastern Ukraine, cargo trains piled high with coal thundered along rail tracks to keep heating and power going to households in rebel-held territory. Coal is the lifeblood of this region dominated by pro-Russian separatists—and now the source of its first corruption scandal. (AP Photo/Mstyslav Chernov)
Crisis in Ukraine

Coal is the lifeblood of this region dominated by pro-Russia separatists—and now the source of its first corruption scandal. The former energy minister of the self-styled Donetsk People’s Republic has accused a top rebel official of pocketing money from the sale of coal to power plants. Both men are now languishing in jail in connection with an investigation into abuse of authority.

The details are murky, but there is growing agreement that the opaque nature of the new order in separatist-controlled areas has created fertile ground for the corruption that flourished under President Viktor Yanukovych, a native of the east who was overthrown in February. Yegor Korosov, an adviser to the rebel government, said opportunists have filled a power vacuum created by the chaos of war, calling them “parasites that have attached themselves to a fast-moving train.”

Corruption is now sapping enthusiasm for the separatist movement among those who might otherwise be its eager backers: “Corruption is all around, I bump into it everywhere,” said Nikolai Usov, a resident of the rebel-controlled Luhansk region. “Anywhere you go, they want money from you.”

The coal intrigue is brewing against the backdrop of a devastating war that has officially claimed a little over 4,000 lives in six months, with the real death toll likely far greater. Supporters of Alexei Granovsky, fuel and energy minister until he leveled accusations against Industry Minister Alexander Kalyussky, contend he is paying the penalty for blowing the whistle on the alleged scam.

“There is some political aspect to this” said his wife, Natasha Granovskaya. “I just hope that the leadership of the republic is laboring under a misunderstanding.”

In a letter to rebel security services last month, Granovsky laid out a series of purported schemes he said were costing the separatist government millions of dollars. He detailed one arrangement whereby coal was sold by mines to electricity and heating plants through an intermediary company allegedly controlled by Kalyussky. By acting as middleman, Kalyussky was able to skim money off the top, Granovsky wrote. Kalyussky’s supporters say he is innocent and that Granovsky is trying to frame him.

A former employee at the power station in question told The Associated Press that Kalyussky threatened him with arrest when he refused to sign off on a consignment of coal over doubts about the legality of the intermediary company.

“I refused to agree to unload the carriages until getting approval from Alexei Ivanovich (Granovksy), but he was on a working trip in Moscow on the time,” said the employee, who asked not to be named out of fear of reprisals against his family. The employee said the plant where he worked, in the town of Starobesheve, uses more than 6,000 tons of coal—worth roughly a half-million dollars—every day.

It is broadly believed that the affair has landed both Kalyussky and Granovsky in prison, but separatist authorities are being publicly tight-lipped. It is unclear whether any formal charges have been brought against either, although Granovskaya said prosecutors told her that her husband is being held only a witness.

Granovsky’s family, friends and colleagues are now turning their attention from the alleged coal scam to fighting a legal battle where a justice system barely exists.

On Tuesday, five days after Granovsky was arrested without charge, a group of around a dozen gathered with a petition for bail outside the prosecutor’s office. The building still bears the scars of its violent storming and ransacking by a mob supportive of the current leadership.

“At the moment, no Russian lawyers will agree to come here” said Alexei Varenov, head of the fuel department in the industry ministry. “We are providing support ourselves.”

Separatist authorities refuse to operate under Ukrainian law, but they have yet to put anything in its place.

“The problem is that there is no specific legal code,” said Yelena Blokh, a Donetsk journalist whose pro-separatist activism landed her in a Ukrainian prison earlier this year. “Even law enforcement authorities don’t know what legal system they are operating within.”

This isn’t the first run-in Granovsky has had with other top rebel officials. In late May, he wrote on his Facebook page to air his objection to plans to nationalize industrial concerns in separatist-held areas.

“Nobody has the authority to take away somebody else’s property and business,” he wrote, “whoever they might be.”

Several people close to Granovsky say he also shared his worries with the Russian government, whose involvement in the administration of the rebel territory is understood to be deep and pervasive. But they say they have received no assistance from Moscow.

Korosov, the rebel adviser, said the humanitarian convoys sent to east Ukraine by Russia have also been a target of expropriation, with around 30 percent of the value of aid embezzled. While he offered no evidence, similar claims were heard this week from the former military commander of the rebels, Russian citizen Igor Girkin, who has now left Ukraine and lives in Moscow, but retains strong contacts with the separatists.

“Assistance from the Russian government is in sorely short supply,” he told Russian online news site Gazeta.ru. “What is more, most of it ends up in the markets, not with the population.”

Meanwhile, Granovsky’s wife says she is losing faith in the rebellion.

“I live here with my parents and children. I want for us to have a true people’s republic, for us to have true justice, so that people can believe in the future,” said Granovskaya. “But when these things start happening, you lose heart.”