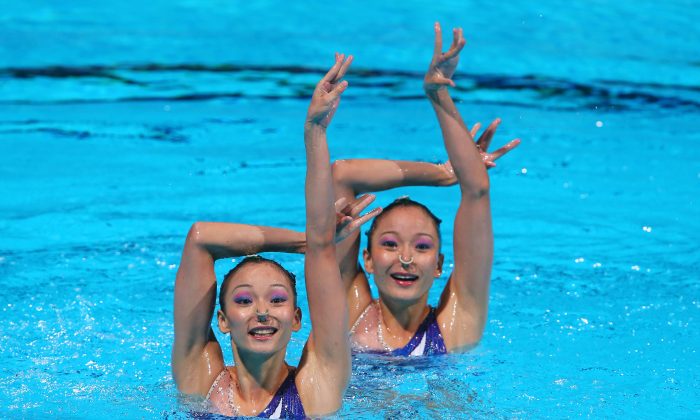 There is no level playing field for athletes in China. Instead, entire sports are run by corrupt administrators, as the case of the former boss of synchronized swimming makes clear, Chinese media have reported.

Several Chinese media outlets reported on Tuesday that the former director of the Synchronized Swimming Department under the General Administration of Sport of China (GASC) was detained on Oct. 30 for investigation on the charge of receiving bribes, citing leaked information from former colleagues and inside sources.

Yu Li, 59, had absolute authority in the circles of synchronized swimming before she retired. China’s media reports are vague about when she retired, although they agree in saying she did so before she was investigated for corruption.

The reports say she started to serve as the director of the Synchronized Swimming Department in 2002 and used to be a synchronized swimming athlete herself.

The trigger to Yu’s investigation is likely related to an incident at the 2013 National Games when a pair of synchronized swimming athletes refused to receive the bronze medal in protest against unfair scoring, according to Titan Sports, China’s most circulated sport newspaper.

The synchronized swimming athletes, Jiang Wenwen and her twin sister Jiang Tingting, expressed their strong disagreement with the scoring, saying their scores were held down throughout the competition.

They also pointed out that the Liaoning Team, which was from the host province and won the championship, were given an extra 2.2 points in the finals with the same set of actions the team used in the qualifying rounds but without significant improvement.

Four out of eight judges gave the exact same scores on all categories for the top three teams, the chance of which was described by the Chinese press as similar to winning the lottery.

The Jiang sisters hosted a press conference after the competition, announcing their retirement. “It was the darkest day in [our] sports career,” they said.

Although Yu wasn’t one of the judges of the competition, she was involved in arranging the scoring, after taking 50,000 to 60,000 yuan (US$8174-$9809) in bribes, an anonymous source told Titan Sports. The source indicated that “ironclad” evidence had been received from Liaoning Province.

After the information was leaked of Yu’s investigation, a number of Chinese reporters tried to verify the facts with the swimming center of GASC, but the staff refused to give any interview or confirmation.

According to the Beijing Youth Daily, almost every sport with high performance has an administrator like Yu who has the most power in the field and can control the results of important games.

Yu gave orders to all the athletes, coaches, judges, and even sponsors, and everything was under Yu’s control, an anonymous former staffer at the swimming center of GASC told state-run Qilu Evening News.

The source said China’s synchronized swimming achieved a lot under Yu, but with such authoritarian methods of management it was easy for her to make mistakes, including taking bribes.

The corruption in the sport industry has been a long-term and severe issue, and Yu’s investigation is just a start of the anti-corruption campaign in the field of sports.

Compared to other instances of corruption in the sport industry, Yu is just a “fly,” and the “big tigers” are to be revealed in the future, the Chinese press says. In a speech in January 2013, soon after Chinese Communist Party head Xi Jinping took power, he gave a speech saying the anti-corruption campaign would target both flies and tigers, meaning low-ranking and high-ranking officials respectively.

On Nov. 2, the central inspection team targeting corruption published a report about the inspection of the GASC from late July to early September. The report says “it’s a serious phenomenon that matches are against the principle of fairness,” and government officials serving posts in sports industry is common, which creates “complicated interest relations.”

In China’s sports industry, scandals involving soccer teams have been widespread, including bribes for winning games, groups of soccer players hiring prostitutes, and so on.

In one case, former Football Association vice chairman Nan Yong was sentenced to 10 years in prison in 2012 for taking bribes from soccer clubs. Nan was accused of 17 instances of accepting bribes, including accepting1.5 million yuan (US$245,338) cash to secure the victory of a soccer club, receiving Rolex luxury watches, luxury wine, fuel cards, and so on, the Chinese press says.

With translation and editing by Lu Chen.