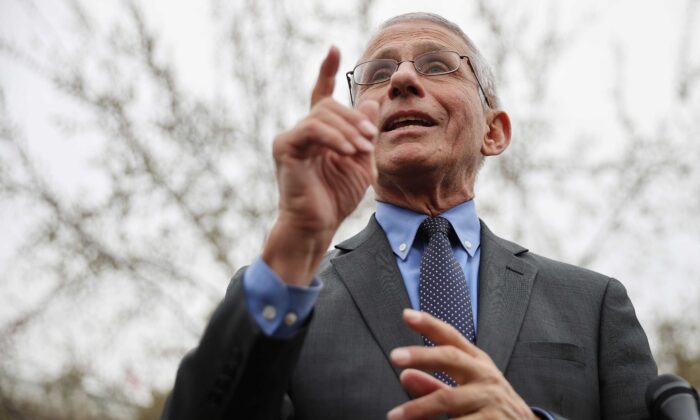 National Institute Of Allergy And Infectious Diseases Director Anthony Fauci talks to reporters about the Trump administration's response to the global coronavirus outbreak outside the White House on March 12, 2020. (Chip Somodevilla/Getty Images) 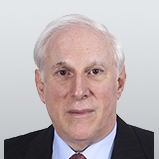 Democrats had little hope for the 2020 election while it was about the economy. Now that the election is about President Donald Trump’s handling of the coronavirus, Democrats see hope and opportunity.

Lest voters punish them, congressional Democrats must maintain an appearance of bipartisanship regarding combating the virus.

No problem: Leave the attacks on Trump to their media wing, some governors of non-critical states, and Hillary Clinton.

Since Trump was elected, Democrats and their media and government-bureaucrat partners have refused to recognize his legitimacy and have tried to destroy his presidency. They created the phony Russia-collusion narrative and impeached Trump based entirely on their opinion, not on evidence or the Constitution. There’s no reason to believe the rage and hate they harbor and have generated will disappear because of the coronavirus threat to us all.

While mostly accepting that Trump is now acting decisively, Democrat-media spin claims the crisis is much worse than it would have been had Trump acted sooner. Hindsight is 100 percent accurate; it’s easy to criticize after the fact. What to do today is never that clear.

Would these critics have acted differently? The Obama administration’s handling of the H1N1 swine flu crisis and the media’s lack of criticism indicates otherwise. Then-President Barack Obama declared a national emergency six months after the outbreak. Four months later, the death toll reached 17,000. H1N1 didn’t provoke the same panic as the coronavirus.

A difference could be desperation to defeat Trump.

“It’s a distraction tactic … racist … he’s doing it [to distract from] his LIES and INCOMPETENCE.” Trump “uses radicalized language and stereotypes to placate supporters and, at worst, holds racist and xenophobic views.” “The president is turning to racist rhetoric to distract from his failures to take the coronavirus seriously early on, make tests widely available, and adequately prepare the country for a period of crisis.”

These quotes are tweets from China’s Xinhua News, CNN political reporter and Editor-at-Large Chris Cillizza, and Clinton, respectively. They all refer to Trump calling what originated in China the China virus instead of coronavirus—identity politics on steroids.

Two days before the Xinhua tweet, Hudson Institute Chinese Strategy Director Michael Pillsbury told Fox News host Sean Hannity, “In recent days, the Chinese have placed a new bet. They want Joe Biden to become president. … But now this idea that President Trump has botched—words the Chinese are using—the handling of the virus, this is being spread all over the world by China.”

The Chinese regime, progressive media, and Democrats are indistinguishable on this.

Had China’s officials dealt forthrightly with the virus, they could have prevented its rapid spread throughout the world and given other countries a chance to prepare. Instead, as typical totalitarians, they attempted to suppress it. China will pay a high price for this with Trump.

Since they know Joe Biden well—having given $1.5 billion to an investment fund of which his son Hunter was a director after a Biden visit to China—apparently the Chinese leadership sees an opportunity and is willing to risk trying to help elect him.

Clinton and other former Obama officials have a huge personal stake in a Biden victory. As president, Biden would end the Durham investigation and any related prosecutions, claiming Trump had ordered them for political purposes.

Like other media Trump refers to as fake news, CNN masquerades as a news organization but is really a political action committee. They have been openly biased and completely committed to destroying Trump’s presidency and to defeating him in 2020.

The Truth About Trump’s Response

Anthony Fauci, director of the National Institute of Allergy and Infectious Diseases and member of the White House Coronavirus Task Force, told Fox News host Mark Levin on March 22, “The coordinated response [to the virus] has been … impressive. … I can’t imagine that, under any circumstances, that anybody could be doing more.”

Levin commented that the opposition party and the press have said Trump doesn’t follow science. Fauci replied that when he has said “for scientific reasons, we really should do this,” Trump has always said, “Let’s do it.” Whenever Trump has suggested something Fauci said wasn’t advisable from a scientific viewpoint, Trump “has never overruled me.”

The early shut-off of travel from China, which Fauci said was timely to avoid the virus’s peak effects, showed Trump didn’t ignore the coronavirus in the beginning. Democrats and their media partners called it racist. They have promoted fear and panic as their best chance to defeat Trump in the election.

Trump embodies the American exceptionalism that Democrats and their media partners reject and will destroy if we let them. The positive, can-do, free-enterprise, and principles-based society our founders created will propel us, under Trump’s leadership, to conquer the coronavirus.

Nobody could have anticipated what Fauci called “a very serious situation the potentially involves everyone in the world.” We shouldn’t fall prey to politically motivated actions; instead, we should look at performance and results.

Steve Hecht is editor at large of the Impunity Observer.

Steve Hecht
Steve Hecht is editor at large of the Impunity Observer in Guatemala.