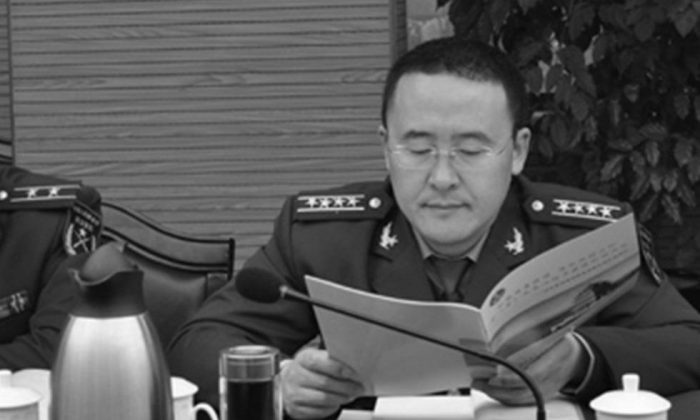 Guo Zhenggang, the son of former vice chairman of the Central Military Commission, reportedly dealt arms before he was sacked. (Freeweibo.com)
China

When the father was one of top officers in China’s military, it became easy for the son to rise through the ranks, eventually becoming a powerful military official in his own right—and an arms trader on the side. Meanwhile, the daughter-in-law got rich through real estate development on military-owned land.

Such is the story that has emerged in the days after the sacking of Guo Zhenggang, the son of former vice chairman of the Central Military Commission, the top Communist Party body that controls China’s military. The father, Guo Boxiong, has long been rumoured to be in the Communist Party’s political dog house.

When People’s Daily, the regime’s official mouthpiece, takes a jab at the son of an official, everyone knows that both their situations are dire.

“Before being sacked, Guo Zhenggang was basically rising up as if riding on a rocket,” the People’s Daily said, taking a jab at Guo as one of the youngest major generals in the force.

People’s Daily continued its interpretation of the sacking: “So it basically means Guo has fallen from the sky.”

Before being sacked, Guo Zhenggang was basically rising up as if riding on a rocket.
— People's Daily

“Guo simply had an insatiable desire for pocketing money from selling arms,” said Duowei. The identity of the buyers was not clear.

Besides being an arms dealer, the young Guo also set up a company making security software for military use. After going through a rigged bidding process, the company was, predictably, awarded the military contract.

Wu collected over 500 million yuan (about $80 million) by selling lease contracts to businesses for spaces inside the shopping center. However, businesses later demanded their money back, as the construction center was never finished on the scheduled date.

Wu refused to return the cash, and the firms later began protesting outside Zhejiang military headquarters in January of this year—they were swiftly dispersed by police, according to Caijing.

Caijing is close to Wang Qishan, the current head of Party’s anti-corruption campaign, and the insider, detailed information it publishes about the ongoing political purge may have been leaked by allies of Wang.

“There is an opt-out clause in the lease contract. How could Wang Fangfang not enforce it? Why couldn’t we get help from either the legal or petitioning channels? What should we do?” said a businessman from Shaoxing, a city in Zhejiang, in an interview with Duowei about the protests.

Before being investigated, the senior Guo was reportedly under house arrest for over a year, reported Hong Kong media Oriental Daily on March 3.

The senior Guo, under pressure from China’s anti-corruption agency, tried to pay up 250 million yuan (about $40 million) to get the investigators off his back, according to the Oriental Daily. That didn’t work out.

He later admitted to having mansions in five provinces, and well-appointed savings accounts in nine banks.