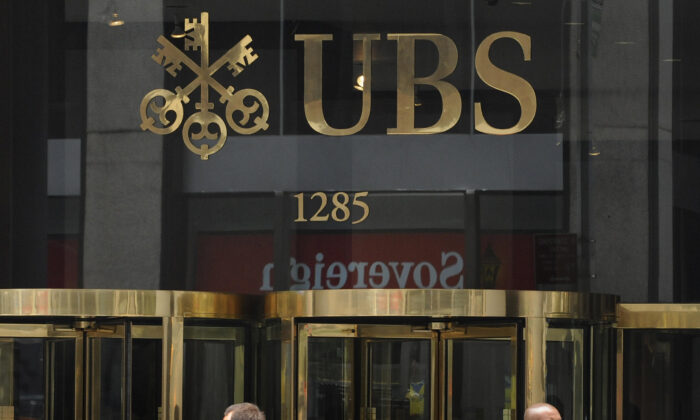 The US corporate headquarters of UBS in New York July 31, 2009. (TIMOTHY A. CLARY/AFP via Getty Images)
Analysis

The Swiss Federal Tax Administration (FTA) has almost completed its transfer of offshore customer information to hundreds of countries and territories, signifying that Switzerland—the world’s largest offshore financial center—has abandoned its three-centuries-old system of keeping bank customer’s information secret, and ending its use as a safe haven for the illegal funds of terrorists and dictators, including the Chinese Communist Party’s (CCP’s) corrupt officials.

As of Oct. 11, 2021, the Swiss Federal Tax Administration (FTA) disclosed the financial information for approximately 3.3 million bank accounts to hundreds of governments.

According to Swiss Info, the Swiss law on the automatic exchange of information came into force at the beginning of 2017 in accordance with international tax regulation. In 2018, Switzerland initiated exchange of banking and tax information with the United States, Europe, and other 36 counties. In 2019, the data sharing expanded to some authoritarian and totalitarian states like China, Russia, and the United Arab Emirates.

The information sharing includes the name of the bank account holder, and their address, country of residence, and tax identification number, as well as the reporting institution, account balance, and capital income.

International Investment cited the Boston Consulting Group’s report in June 2018, saying that over the centuries, Switzerland has managed about one-third of global private wealth due to its strict banking secrecy and neutral political stance.

Many of the CCP’s rich and powerful officers have stashed their wealth in offshore financial centers such as Switzerland, but the exact amount of their offshore assets are kept secret.

The annual Billionaires Insights report jointly released by Swiss banking giant UBS, and PwC in October 2020 showed that the number of billionaires in China climbed to 415 in 2020 from 325 in 2018; the total asset size of China’s billionaires soared to nearly $1.7 trillion compared to $962.4 billion in 2018; and total assets increased by 75 percent or $718.5 billion in two years.

The report says that the number of global billionaires has doubled, and their total wealth has more than tripled in the past 10 years, while the wealth of Chinese billionaires has increased nearly nine times in the same period.

Elmer Yuen Gong-yi, a Hong Kong industrialist who has 20 years of business experience in mainland China and is familiar with the top ruling families of the CCP, mentioned in an interview with The Epoch Times’s Chinese edition last August that he estimates the CCP’s powerful and wealthy to have transferred a total of about $10 trillion in assets out of China, including the overseas assets of former party leader Jiang Zemin’s family, which amounted to more than $1 trillion.

Yuan said that his estimate is based on figures revealed by former CIA staffer Edward Snowden when he went into hiding in Hong Kong in 2013 after disclosing the CIA’s mass surveillance to The Guardian during the Obama administration—that $4.8 trillion left China. Yuan calculates that at least the same amount left China in the following seven years.

Starting in 1989, ex-head of the CCP Jiang Zemin took a grip of the party’s top leadership for nearly 30 years, with his family accumulating huge wealth.

Jiang Mianheng is deeply linked to China’s largest securities trading case, involving up to 1,200 billion yuan ($188 billion), and many major corruption cases, with culprits investigated and sentenced: Zhou Zhengyi, property developer and “the richest man in Shanghai” ranked by Forbes; and Wang Weigong, secretary of the former vice-premier Huang Ju, who was in charge of national financial power during the Jiang Zemin era. All of these cases involved astronomical amounts of corruption and embezzlement of state property.

On Dec. 9, 2002, the Bank for International Settlements issued a 105-page routine report from May to September, which noted on page 29: “In particular, Chinese banks transferred over $3 billion to their own offices in banking centers in the Caribbean.”

According to the confession of Liu Jinbao, who was imprisoned in 2005 as chairman of the Bank of China’s Shanghai branch, $2 billion of that money was transferred by Jiang Zemin on the eve of the 16th Communist Party Congress—which convened on Nov. 8, 2002—as funds to give himself a way out, reported Secret China, an independent Chinese media based in the United States, in July 2003.

Jiang Zemin’s grandson Jiang Zhicheng has reaped huge profits in China, the world’s largest emerging private equity market, using his political connections to manipulate situations for personal profit, according to an investigation by Reuterss in April 2014.

According to the report, Jiang Zhicheng established Boyu Capital in 2010, then quickly seized $2.1 billion through raising funds for the Chinese Internet giant Alibaba. Meanwhile, two other investments in the state-backed debt trader China Cinda Asset Management Co. and Sunrise Duty Free earned the princeling hundreds of millions of dollars.

According Guo Wengui, a Chinese tycoon living in exile in the United States, Jiang Zhicheng has laundered $500 billion abroad and operates trillions of dollars in assets through his investments.

Switzerland Abandons Banking Secrecy Under Pressure From US, Europe

Swiss banks have been protecting customer confidentiality for some 300 years, but it was not until 1934 that Switzerland formally legislated its Banking Act, which said that Swiss financial institutions can refuse any government investigation or surveillance of customer accounts, and that account information is permanently protected unless there is conclusive evidence of criminal conduct by the depositor. Moreover, customers can choose the most secure and anonymous way to conduct their business.

Switzerland’s tax rates are lower than those in the United States and most European countries, which have high taxation and welfare policies.

All of these advantages make it possible for the wealthiest, as well as terrorists, criminal organizations, and even officials of dictatorial states, to securely store their money. However, some have used the system to help them evade taxes and engage in criminal activity such as money laundering.

Since the 2008 financial crisis, the United States has stepped up pressure on Switzerland to turn over the names of some 52,000 U.S. customers who held secret accounts at UBS, by launching a tax fraud investigation into the bank. The U.S. Department of Justice alleges that UBS concealed billions of dollars in untaxed assets from these U.S. persons, reported Reuters in April 2010.

In July 2008, the U.S. Senate accused Swiss banks, including UBS, of helping wealthy Americans avoid taxes through offshore accounts worth about $18 billion, resulting in a significant annual loss of U.S. tax revenue.

In the end, in order to settle two charges against UBS and avoid the collapse of the bank, which had already been hit by the financial crisis, the Swiss government not only agreed to pay $780 million in fines, but also allowed UBS to submit a list of about 280 serious U.S. tax avoiders, and UBS promised to provide information on 4,450 U.S. customers within a year. Switzerland thus broke away from its centuries-old regime of banking secrecy.

But the United States did not stop pressuring Switzerland. The U.S. Foreign Account Tax Compliance Act (FATCA) passed in March 2010 to track tax avoidance by Americans abroad, requires non-U.S. banks to report to U.S. tax authorities information on the assets of their U.S. customers at the bank.

Following the FATCA, Switzerland and 47 other Organization for Economic Cooperation and Development (OECD) member countries at an annual meeting in May 2014 signed a Common Reporting Standard, a new standard for the automatic exchange of global tax information between member states.

The EU has also been pressuring Switzerland, a non-EU country, by placing it on a “grey list” of non-cooperative countries that have not yet fully implemented international tax standards in December 2017. The EU did not remove Switzerland from the list until October 2019, when Swiss authorities committed to and began cooperating in the exchange of tax data with hundreds of countries and territories.