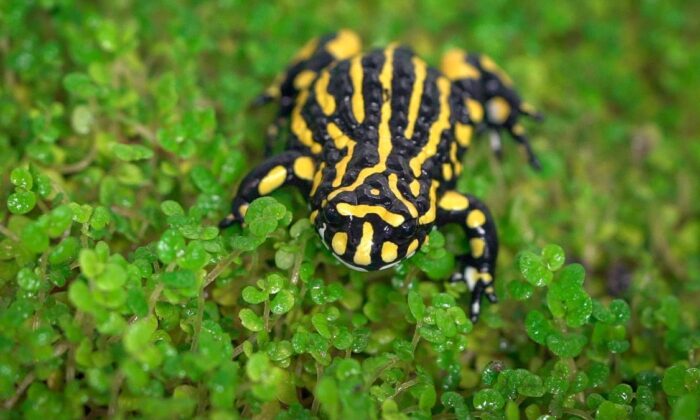 Corroboree Frogs Hop Back Into The Snowy Mountains

Kosciuszko National Park in the Snowy Mountains will establish the new frog population in a purpose-built field enclosure designed to protect and observe the frogs. The enclosure features irrigation systems to prevent bush fires and remote cameras to monitor them.

The Southern Corroboree frog population, up until now, was dwindling with an estimated population of just 30 left in the wild.

“These 100 corroboree frogs have been reintroduced to a purpose-built field enclosure at Kosciuszko National Park that protects them from the disease while allowing them to grow and thrive into the future,” Minister for Environment, James Griffin, said in an NSW government media release.

‘This is conservation in action, and it’s working. Our Savings our Species programs like this one are part of the biggest conservation commitment in NSW history, aimed at protecting and conserving our threatened plants and animals.”

In the NSW government media release Taronga Conservation Society Australia Herpetofauna Unit Supervisor, Michael McFadden said that the timing of the frog’s release into the Snowy Mountains is crucial.

“Corroboree frogs’ biology is adapted for cold alpine climates, so the terrariums where they are bred are kept refrigerated to match seasonal temperature variation in their natural habitat,” McFadden said.

“Timing the release of these frogs is crucial for their survival, allowing them sufficient time to acclimatise and prepare for hibernation ahead of winter.”

Droughts, habitat degradation from other species, the 2019 to 2020 bushfires, and a chytrid fungus outbreak, pushed the Corroboree frog to the brink of extinction

According to a documentary by the ABC, the chytrid fungus outbreak has wiped out multiple Australian frog species, such as the Southern Day Frog and the Gastric-Brooding frog.

The fungus, attacks the hearts of frogs and salamanders and destroys their skin, has caused the decline of at least 500 amphibian species, 90 of which have gone extinct or are thought to be extinct.

The origin of the fungus is thought to be the African Clawed Frog, a species that was spread globally after it was popularized in the 1930s by a scientist who discovered that it could be used as a pregnancy test reported the ABC documentary.

The pregnancy test involved injecting the urine of a possibly pregnant woman into a female African Clawed Frog, which would lay a clutch of eggs if the woman was pregnant.

The test was highly accurate and the frog was extremely common so the pregnancy test was popularized around the world with thousands of African Clawed frogs being exported globally. This initiated a boom of research revolving around the frog, which embedded itself into both scientific study and international frog populations.

However, in Australia, the fungus has also been attributed to the introduced invasive Cane Toad population in the northern states of Australia and American Bullfrog.