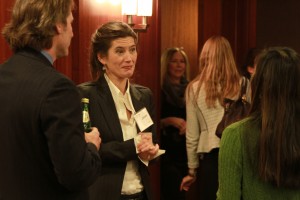 Business Networking is awkward and complicated for many women.
News

Corporate Therapy: How Women Can Engage at Business Networking Events

Ready for a confession? I’d rather go to the dentist than attend a networking event. Turns out, I’m not alone. This is especially true when it comes to women networking at professional services events or industry events, where we’re often in the minority. Whereas it may take your breath away to walk into a room with a sea of suits engaging and interacting, there are some re-energizing techniques you can apply to make interacting less intimidating, thereby maximizing the number of rewarding connections you’ll make.

Even if you are the only woman at an event, rest assured, you are not the only person who feels anxious. Networking favors extroverts. Since 40% of the population qualifies as introverted, there is clearly some pain in the room. Look for people who need rescuing….you know, those who are hunched over smart phones or hovering awkwardly on the perimeter of a group. If your attitude is that everyone has something valuable to offer, it doesn’t matter who you choose to engage with. Your generosity of interaction could make a world of difference to the person who is unable to initiate a conversation. You could literally save the day for a tortured introvert!

Dare to be Different

Men have it easy when it comes to business dress….they choose a suit and hit the street. The biggest decision they make is what tie to wear. Women have more choices when it comes to business dress— liberating for some, daunting for others. But women can spin this to work in their favor. Instead of wearing a dark suit to blend in, wear a bright red suit or an emerald green suit and stand out. No one will forget meeting you. Go one step farther and wear a conversation piece, like a unique necklace, a whimsical scarf, or a knockout pair of shoes. A brooch pin with a story has led to business for me more than once. And don’t forget that men and women alike notice accessories.

Actively Try to Help Others

When you put yourself into the role of helping others, engaging with strangers becomes less daunting. A good place to start is by offering to help the host. You’ll create a huge advantage for yourself by arriving early to an event. Not only is it easier to start a conversation when there are just a few people in the room who have yet to engage, but this is when you can offer your help if you see the host attending to last minute details: arranging chairs, opening wine, organizing nametags on the registration table. By offering your assistance, you’ll bond with the host, and you’ll also have a part to play. Psychologically, you’ll no longer come across as an anonymous guest, but rather a person with a role.

Men engaging in group conversations often get pulled into sports talk. Whether you’re a man or woman, if you don’t authentically enjoy sports, don’t lose your momentum here. You’d be surprised how many men don’t have an interest in sports, but will endure the conversation so they don’t stand out. Use this to your advantage. Look at the group and spot the man whose eyes have glazed over. Engaging with him will build instant rapport, particularly since the natural conversation will begin with finding out what does interest this evolved gentleman.

A wise man gave me this piece of advice, and it comes back to me daily: Really, what’s the worst thing that can happen at a networking event? No one is going to hit you, and if someone is rude to you, that’s their shame. There is not a networking event I attend where my palms don’t sweat and my insides aren’t like gelatin. But that’s just our little secret; No one would ever know. Choose to show up at a networking event as an interested and interesting contributor to the event. Ask more questions, talk about yourself less, and after the event, commend yourself for having transcended your fear.