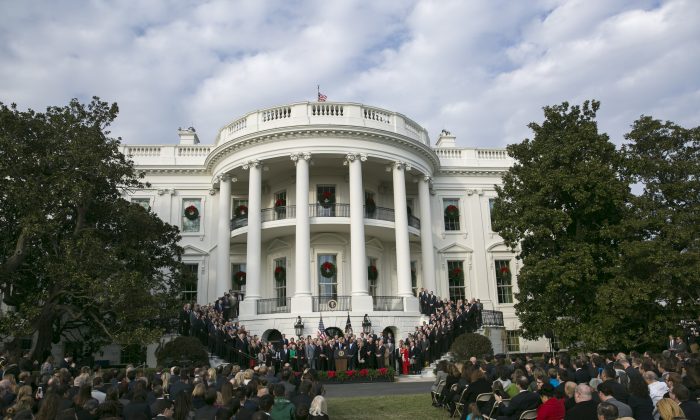 President Donald Trump celebrates the passage of the tax bill, while flanked by Republican members of Congress, on the South Lawn of the White House in Washington, Dec. 20, 2017. (Samira Bouaou/The Epoch Times)
Companies

WASHINGTON—By delivering on his promise of tax reform, President Donald Trump has set off alarm bells in other countries, which are concerned about how a newly competitive United States will affect their economies.

The tax overhaul is a once-in-a-generation opportunity that will unleash economic growth, according to Republicans. They call the existing tax code a complex, costly, and unfair system that caters to special interest groups. They claim the new bill will encourage more investment and job creation.

“More products will be made in the USA. A lot of things are going to be happening in the USA,” said Trump at the White House on Dec. 22. “We’re going to bring back our companies. They’ve already started coming back.”

The primary economic goal of the Trump administration is to increase U.S. economic growth, which was stuck in the low 2 percent range since the 2008 financial crisis. It says higher growth can be accomplished by the tax reform, which cuts the corporate tax rate from 35 percent to 21 percent, a globally competitive level.

Critics say that tax reform won’t unleash growth, as they believe U.S. corporations are likely to use much of the windfall from tax cuts to reward investors with share buybacks and dividends.

However, the reactions in other countries gainsay critics’ concerns.

China and the major European countries are worried about the change in the investment landscape, as the tax overhaul bill will make the United States a more attractive country for investment.

The European Union, in particular Germany, is expected to lose ground in the competition for foreign direct investment. German economists are warning that significant amounts of new investment and jobs will shift from Europe to the United States.

“The U.S. move will challenge the current course of European and German tax policy. Without an appropriate response, Germany could become one of the European losers in the new round of tax competition,” stated a report by the Centre for European Economic Research (ZEW) and the University of Mannheim in Germany.

Both France and Belgium recently announced sharp tax rate cuts from their current levels to 25 percent.

At 15 percent, Germany’s corporate tax rate is relatively low. When combined with the solidarity tax and subnational taxes, however, the overall rate reaches almost 31 percent, according to the Tax Foundation, an independent, nonprofit policy group based in Washington.

The ZEW study predicts that German companies will increase their investment in the United States after tax reform. Hence economists are urging the German government to develop a strategy for improving Germany’s competitiveness.

Beijing also sees Trump’s tax overhaul as a significant threat. China is becoming ever less competitive in terms of both taxes and wages, and Beijing fears the tax bill will make the United States more competitive. The bill will also make U.S. assets, like stocks and real estate, more attractive for foreign buyers again. This will boost the dollar and indirectly punish the yuan.

According to a report by The Wall Street Journal, Chinese officials are already working on a contingency plan to counter the Trump reforms by raising interest rates, tightening capital controls, and micromanaging the currency by intervening in the foreign exchange markets.

Compared with other nations in the Organization for Economic Cooperation and Development (OECD), the United States currently has the highest corporate tax rate at 35 percent rate, far exceeding the rates of the UK, Canada, and Ireland.

In addition, the United States has a 35 percent tax on repatriated foreign earnings.

The existing U.S. tax code thus created a strong incentive for American corporations to move their operations to low-tax countries and keep their foreign earnings abroad. U.S. companies have parked nearly $2.5 trillion overseas, according to estimates. Trump predicts this amount is now $4 trillion.

The tax reform, to be implemented in 2018, reduces the federal corporate tax rate to 21 percent. When combined with the average of state and local corporate tax rates, the U.S. statutory rate would be approximately 26.5 percent, which is below the current weighted average of the OECD, 31.4 percent, according to the Tax Foundation.

A lower corporate tax rate will restore the nation’s competitive edge and level the playing field for U.S. companies. In addition to lowering rates, the tax bill moves from a worldwide taxation system—which taxes income earned anywhere in the world—to a territorial system, only taxing income earned inside the home country.

The existing worldwide tax system double-taxes the foreign income of U.S. companies as soon as these earnings are repatriated. By contrast, in a territorial tax system, the companies would be taxed on their U.S. income only and would be exempt from paying taxes on most or all foreign income.

German economists are warning that significant amounts of new investment and jobs will shift from Europe to the United States.

As a transition to the territorial system, there will be a one-time tax payable on profits U.S. multinationals have already accumulated overseas. The corporate repatriation rates would be 15.5 percent on cash and 8 percent on illiquid assets.

According to the new plan, companies will also be able to deduct 100 percent of the cost of their capital investments in the year the investment is made. This provision, which will phase out in five years, is expected to boost business investments in the short term.

“I think it is going to be one of the biggest things in the bill, frankly. I think people are going to go out and absolutely go wild over expensing,” Trump said.

Several companies, including AT&T, Boeing, Sinclair, Wells Fargo, and Comcast, welcomed the passage of the tax reform bill by the Congress. They announced new investments, wage hikes, and employee bonuses.

While Republicans and some economists argue that reform would significantly boost economic growth and raise wages, critics have doubts about the growth effects of the legislation, given the large budget deficit. The theory is that as tax cuts lead to a growing deficit, interest rates rise and the amount of money available for investment in the economy shrinks.

Republicans reject the argument that tax cuts blow a hole in the deficit. In line with the Laffer Curve theory, they believe tax cuts will eventually boost revenues.

The Laffer Curve was developed by economist Arthur Laffer to show the relationship between tax rates and tax revenue collected by governments. Laffer argues that high tax rates hinder business investment and lead a company to find ways to protect its capital from taxation. Therefore, raising tax rates beyond a certain level is counter-productive for raising tax revenues, a relationship charted by the curve.

According to Kevin Hassett, chairman of the Council of Economic Advisers, the United States is on the wrong side of the Laffer Curve and can collect more revenues with a lower tax rate.

The Laffer Curve theory became the cornerstone of President Ronald Reagan’s economic policy, which resulted in one of the biggest tax cuts in history. During his time in office, federal tax receipts increased from $517 billion in 1980 to $909 billion in 1988.

Due in part to the existing tax code, the United States lost about 4,700 companies and $510 billion in business assets between 2004 and 2016, according to a study released by the advisory firm Ernst & Young in September. The uncompetitive tax code contributed to increased foreign takeovers of U.S. companies.

The adoption of a territorial system and a lower tax rate would revise this trend and boost cross-border acquisitions by U.S. companies, stated the report.

Mergers and acquisitions deals allow businesses to access new markets, new distribution channels, and new technologies. They can also strengthen the contribution of an American company to the U.S. economy.

“As the typical U.S. multinational company expands its foreign operations, it is estimated that for every 100 jobs added abroad, an additional 124 jobs are created by the U.S. parent domestically,” stated the report.

The current tax code also hinders foreign direct investment (FDI) in the United States, which is a significant contributor to a country’s economy. Ernst & Young estimates that inward FDI, investment into the United States, would have been 14 percent higher if the U.S. corporate tax rate had been competitive.

“Taxes and other government policies in host countries are important determinants of companies’ investment decisions,” stated the Ernst & Young report.

“U.S. tax reform could have a significant impact on the attractiveness of the United States for inward FDI.”