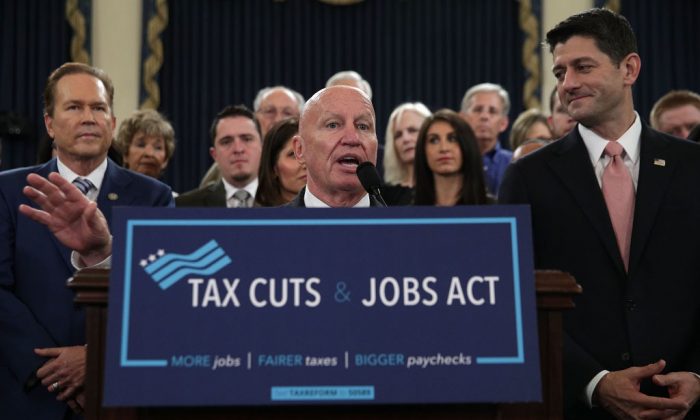 Tax reform is boosting company savings, which in return benefits “workers, productivity, and the economy overall,” according to JPMorgan Chase.

The new tax code slashes the corporate income tax rate from 35 percent to 21 percent. It also allows businesses to immediately deduct 100 percent of the cost of certain investments.

Glassman says the legislation’s effect has proven to be substantial, with the average business seeing its tax burden drop by more than half, from 26 percent to 12.6 percent of pre-tax profits.

Based on the first quarter corporate earnings data, JPMorgan Chase predicts that the tax cut windfall for businesses could surpass $100 billion, which means a nearly 10 percent jump in overall corporate profits.

Critics of the tax reform claimed that most companies would pass on the tax windfall to shareholders. Tax cuts, however, are not just benefiting the rich, according to Glassman.

The benefits will likely “extend far beyond shareholders’ dividends,” he says.

Based on extensive research conducted by the Congressional Budget Office and an independent study by Princeton University Professor Uwe Reinhardt, “reduction in the corporate tax rate should eventually lead to a larger share of revenue going toward wages,” writes Glassman.

“By improving transparency, removing distortions and building the nation’s productive capacity, the lower corporate tax rate is eventually expected to benefit all Americans.”

Businesses have also accelerated their capital investments in recent months to take advantage of the tax cuts and the full expensing provision.

“In today’s market, a business that chooses to send its tax windfall back to shareholders will soon find itself struggling against competitors who used their savings to make investments in labor-enhancing technologies,” Glassman said.

Workers stand to benefit from a surge in capital investment, Glassman thinks, since wages are closely tied to productivity gains.

“Now that the U.S. corporate tax rate is in alignment with the rest of the industrialized world, businesses will no longer have a strong incentive to move their headquarters overseas or hoard their profits abroad,” stated Glassman.

Optimism within the small business world has also soared to the highest levels in recent months as a result of tax cuts and strong economic growth.

A survey conducted by the National Federation of Independent Business (NFIB) shows that three-fourths of small business owners believe the tax cuts will have a positive effect on their businesses.

“The corporate tax cut went a long way for us,” said Angela Dine Schmeisser, president and CEO of Ohio-based St. Marys Foundry. “We just put in our annual wage increases and recalibrated our benefits packages because we have the money available to do that.”

Based on last year’s financial data, she estimates that her company saves around $400,000 on taxes, which would be fully passed on to workers.

Investing in workers is the right decision for the long run, as it will “make us more competitive,” Schmeisser said.

He was in Seoul, South Korea, to meet with South Korean President Moon Jae-in for “sincere, candid” talks on denuclearisation.