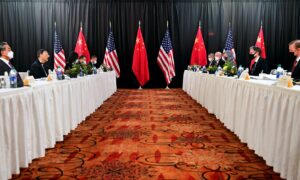 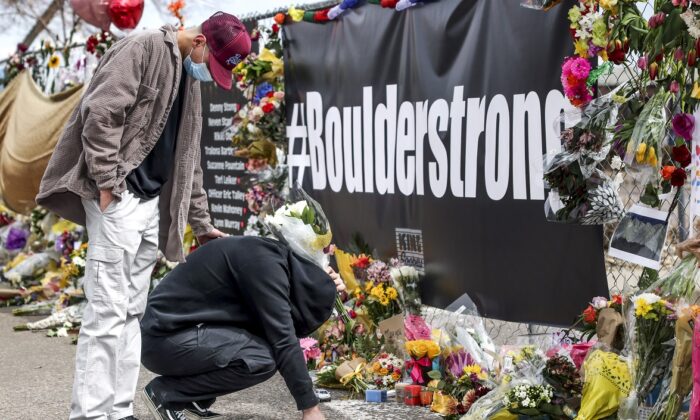 A makeshift memorial outside a King Soopers grocery store where ten people were murdered in Boulder, Col., on March 25, 2021. (Michael Ciaglo/Getty Images)
Viewpoints

The very corporate media that presents itself as the ultimate arbiter of truth, and sworn enemy of disinformation, has, in the last week gone to great lengths to reveal to the world just how brittle this façade is.

Its coverage of the shootings in Georgia and Colorado has brought into stark relief its true nature: The corporate media is the communications arm of the Ruling Class, prioritizing narrative over reality in a bid to change the culture and our politics—consistent with the Ruling Class’s ideology and ambitions.

That is, the media ultimately exists to serve the ends of the powerful—of which it is an organ—rather than to challenge the powerful.

The peddlers of Russiagate, and an avalanche of similarly deceitful and detrimental tales, who simultaneously engage in anti-speech activism against dissenting independent media voices they claim are the real disinformation artists (the ones often exposing corporate media mendacity) are the ultimate projectionists.

In the case of the Georgia shooting, the unmistakable narrative propagated in article after article, echoed by those from President Joe Biden on down, was this: The shootings at Atlanta area spas by a white male that killed eight, including six Asians, were anti-Asian hate crimes borne of white supremacy. They come against a background of rising anti-Asian hate, driven in part by a Chinese coronavirus-driven backlash that the Trump administration helped whip up, and just as the very white supremacism and extremism animating that administration’s supporters is mushrooming into our greatest domestic threat.

The problem is, every element of this narrative is dubious.

The other parts of the narrative at hand were similarly wanting.

The idea that anti-Asian hate, driven by white supremacists, has exploded since the onset of the coronavirus crisis is undermined by the relative paucity of such attacks, the unscientific and sometimes biased sources of data cited to justify it, the statistics on the perpetrators of anti-Asian crimes, and the political predilections of those discriminating against Asians in civil society. It is at very best opinion to claim that a Trump administration that routinely explicitly delinked the ruling Chinese Communist Party (CCP) from the Chinese people when ostracizing China for its malign acts, and merely rightly referred to the coronavirus by its place of origin, is culpable for anti-Asian hatred. There may be a large percentage rise in such sentiments in America, but by all accounts it mercifully manifests itself in related acts that have grown from a miniscule level to a slightly less miniscule level, both on an absolute and relative basis.

That the CCP’s English-language mouthpieces have been seizing on this overarching narrative, and that it has ramped up its propagation of it around the Anchorage meeting between Secretary of State Antony Blinken, and National Security Advisor Jake Sullivan, in which their two CCP counterparts had the gall to attack America for its purported human rights violations, demonstrates the chicanery at play.

The overall argument that ill-defined “white supremacy,” “right-wing extremism,” or general “extremism” are mushrooming, and constitute the greatest threats to our homeland is also a canard.

Past studies seeking to prove this idea have repeatedly proven dubious. The intelligence community has not provided justification for its dire assessment of the purported threat of domestic violent extremism.

The narrative around the primary act providing the pretext for the U.S. government-led focus on this issue, which the media has dutifully parroted, and the hysteria generated over subsequent non-acts, have further undermined the argument.

The notion that the Jan. 6 breach of Capitol Hill—disgraceful and inexcusable though it was—constituted a gory armed insurrection, and attempted overthrow of the U.S. government, is crumbling. Nor has there been credible evidence given to justify the hyping of purported threats in January to America’s statehouses, in March again to the Capitol, or since for the continued militarization of Washington, D.C.

Nevertheless, the narrative persists that white supremacists or extremists are the nation’s greatest scourge, and of course that they come from the ranks of Trump supporters, all of whom may well be defined as actual or would-be domestic violent extremists.

In sum, the media, consistent with our political elites, has sought to exploit the Atlanta area shootings based on identity politics, and use said politics as a cudgel against their political adversaries—basic prudence, the merits, and the truth be damned.

The story of the Boulder, Colorado shooting is still playing out, but as in the case of the Atlanta area shooting, the first impulse of many in the media was to pin the attack on white supremacy, again, to hone in specifically on identity politics and seek to wield it as a cudgel.

When the facts started to come in and quickly undermined this narrative, the shooter being an Arab Muslim Syrian immigrant, the media quickly pivoted. It did not paint the attack as an actual or potential indicator of the scourge of Islamic supremacy. Rather, it portrayed him as a disturbed individual with a violent streak.

The media shifted to safer political ground: Going after guns, in tandem with the Biden administration. “It is easier to buy a gun than to register to vote,” they lied. That is, the media focused on the weapon rather than the perpetrator, in a bid to further curtail the Second Amendment that the media loathes.

The corporate media does not like machinations like the ones described herein to be exposed—its cynical exploitation of tragedies, propagating of pernicious narratives, and the resultant societal division it sows, for political ends.

The anti-speech activism much of the corporate media is currently engaged in is about removing competition—both those who critique it, and those who present dissenting viewpoints and ideas.

In the end, anti-speech activism is seeking to cement the Ruling Class’s monopoly on the narrative, the culture, and the politics.