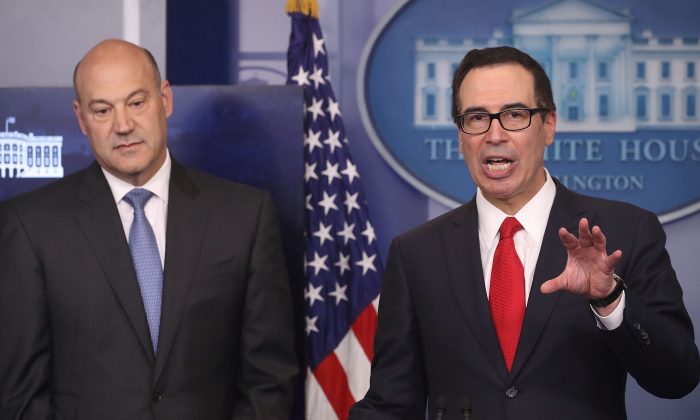 OTTAWA—Corporate Canada is bracing for the latest economic challenge out of Washington: a tax-cutting plan for U.S. businesses that many fear would pose a considerable threat to Canadian competitiveness as well as Ottawa’s bottom line.

The White House announced a tax-reform package on April 26 that included a proposal to significantly slash the top U.S. corporate rate from 35 percent to 15 percent.

But concerns the plan would inflate U.S. federal shortfalls mean it could face a difficult road to implementation.

Still, if it were to come into force, such a “dramatic” tax reduction would push the U.S. effective corporate rate about seven percentage points below Canada’s effective rate, said tax expert Jack Mintz.

Mintz said the change would erase Canada’s current tax advantage over the Unites States of about four percentage points, once multiple factors—including federal and provincial rates—are factored in.

That difference, Mintz warned, would entice businesses to move their investments and profits south of the border, starving public treasuries in Canada of up to $6 billion per year in revenues.

“People are going to take money out of Canada and put it into the U.S.,” said the University of Calgary professor, who has closely studied the issue.

“And it’s not just the American companies. There will also be Canadian companies with operations in the United States. … So, this is a real negative for Canada, no question.”

“Many are just sitting on cash waiting to see what happens,” John Manley, head of Business Council of Canada, said of Canadian firms.

People are going to take money out of Canada and put it into the U.S.
— Jack Mintz, University of Calgary

The Trudeau government, Manley added, should keep a close eye on tax-competitiveness issues and ensure it has a contingency plan ready to deploy, if necessary.

He said it’s also important to recognize that Trump’s ambitious tax proposal is a long way from becoming law because it would likely cost the U.S. government trillions of dollars of lost revenue.

Mathew Wilson, senior vice president of Canadian Manufacturers and Exporters, said the organization has been urging Ottawa to seriously consider easing its own regulations and to ensure the effective corporate rate remains competitive with the United States.

Canadian investment has been “terrible” under current conditions and a major tax cut in the United States would only make things worse, Wilson said.

“If companies aren’t investing in Canada, the economy just grinds to a halt,” said Wilson, whose organization represents more than 10,000 companies.