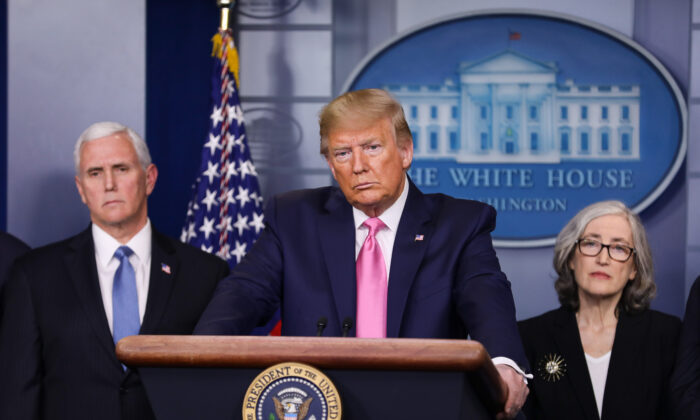 President Donald Trump holds a press conference with health officials and cabinet members about the coronavirus in the White House on Feb. 26, 2020. (Charlotte Cuthbertson/The Epoch Times)
By Ivan Pentchoukov

After receiving a briefing by government health experts on the status of the coronavirus outbreak, President Donald Trump said that the risk to the American people continues to be very low because of early steps taken by the administration.

Trump made the announcement at the White House on Feb. 26, flanked by administration officials including Vice President Mike Pence, whom the president designated as the point person to lead the whole-of-government effort to protect the United States against the deadly disease.

“We’re ready to adapt, and we’re ready to do whatever we have to as the disease spreads, if it spreads. As most of you know, the level that we’ve had in our country is very low and those people are getting better,” Trump said.

The Centers for Disease Control and Prevention (CDC) asked the American public on Feb. 25 to prepare for an outbreak of the virus, relatively few cases of which have so far been confirmed in the United States.

Secretary of Health and Human Services Alex Azar, testifying before a congressional committee on Feb. 26, said that two more American passengers evacuated from the Diamond Princess cruise ship tested positive for the virus. Testifying in the afternoon in front of a different committee, Azar said he was informed of another confirmed case—the first involving an American who either has a history of travel to an area where the virus is spreading or has had close contact with someone with travel history in more than two weeks.

The three new patients brought the total number of confirmed cases in the United States to 60. The confirmed cases include 42 passengers who were aboard the Diamond Princess, three people evacuated from China, and 15 other U.S. cases related to travel or close contact to travelers. Diamond Princess ultimately turned from a quarantine zone into a highly effective means of transmitting the virus, as hundreds of people became infected, leading to four deaths and prompting criticism about how Japanese officials responded.

Of the 15 U.S. cases, eight have been confirmed in California, one in Washington state, one in Arizona, two in Illinois, one in Massachusetts, and one in Wisconsin. Meanwhile, health officials in Oregon, Michigan, and Washington state say they are monitoring hundreds of people who are at risk of contracting the virus. Trump said eight of the 15 domestic cases are recovering at home, five patients have fully recovered, and two are in the hospital, with one in serious condition.

The Trump administration asked Congress on Feb. 24 for $2.5 billion to speed development of a vaccine, support preparedness and response activities, and gather needed equipment and supplies.

Sen. Chuck Schumer (D-N.Y.) proposed an $8.5 billion request on Feb. 26. The senator has been critical of Trump’s response to the outbreak, but his request—announced before the Democratic-controlled House Appropriations Committee has weighed in—rankled some Democrats hoping for quick, bipartisan action to address the crisis.

“If they want to give more, we’ll do more. We’re going to spend whatever is appropriate,” Trump said in reference to Schumer’s proposal. “Hopefully we’re not gonna have to spend so much because we think we have done a great job in keeping it down to a minimum.”

Pence has prior experience dealing with a viral outbreak. He was the governor of Indiana when the first domestic case of the Middle East Respiratory Syndrome (MERS) was confirmed in the state.

“From the first word of the outbreak of the coronavirus, the president has taken steps to protect the American people from the spread of this disease,” Pence said, noting that the White House quickly enacted travel restrictions, directed aggressive quarantine efforts, declared a public health emergency, and established the coronavirus task force.”

U.S. health officials have previously warned that they expect some spread around the country. The message has become more urgent as they work to educate Americans about the risk, and about the steps that would happen if they are unable to contain the new virus by quarantining travelers coming to the United States.

San Francisco, where there are no confirmed cases of the virus, declared a local state of emergency on Feb. 25 as a precaution against the spread of the disease. The declaration will allow the city to increase its emergency planning efforts and promptly redirect resources and employees in case of an outbreak.

Now, they want people to start thinking about different kinds of measures they might see if the virus starts spreading, including closing schools and encouraging telework. Those steps were taken during the 2009 H1N1 flu pandemic.

“Part of preparedness is an educated population thinking about the future,” said Azar.

“The immediate risk to the general American public remains low, but that has the potential to change quickly.”

Senators of both political parties questioned on Feb. 25 whether the White House’s request for $2.5 billion would be enough.

“If you low-ball something like this, you’ll pay for it later,” Sen. Richard Shelby (R-Ala.) told Azar, Trump’s top health official. The two faced each other at a budget hearing that turned into a forum for assessing U.S. readiness.

Shelby said if the virus keeps spreading, “it could be an existential threat to a lot of people in this country.” He chairs the powerful Appropriations Committee, which sets spending levels for federal agencies.

Azar said that nearly two months after the first alarms were raised, there’s no evidence the virus has spread here beyond patients infected overseas and a few close relatives. He credited travel controls and mandatory quarantines, adding that government scientists are working to develop a vaccine and to perfect a test for detecting the virus.

“We cannot hermetically seal off the United States to a virus, and we need to be realistic about that,” the health chief said. “We’ll have more cases in the United States, and we’ve been very transparent about that.” He added that if it happens, “we’ll work to mitigate those.”

The CDC advised people to take the usual precautions to avoid spreading the virus, such as staying home when sick and washing hands with soap and water.

This week, the National Institutes of Health received a shipment of test doses of a vaccine candidate from Moderna Inc., in preparation for first-step safety testing in a few dozen people aimed to begin by April.

Dr. Anthony Fauci, the National Institutes of Health’s infectious disease chief, told reporters that in a best-case scenario, “you’re talking about a year to a year and a half” before any vaccine would be ready for widespread use.

Zack Stieber and The Associated Press contributed to this report.