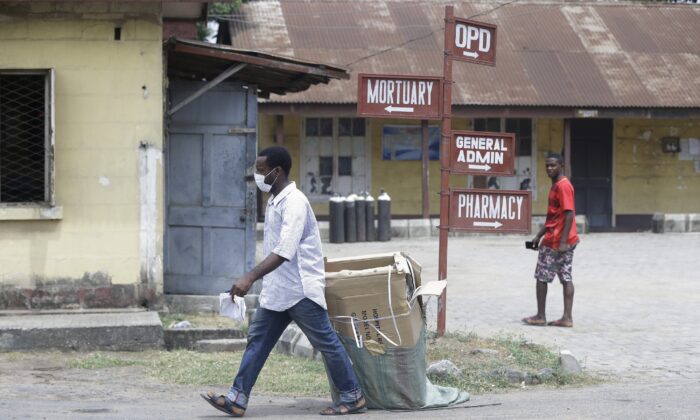 People walk inside the Yaba Mainland hospital compound where the first patient with the COVID-19 virus is being treated in Lagos, Nigeria on Feb. 28, 2020. Nigeria's health authorities have reported the country's first case of a new coronavirus in Lagos, the first confirmed appearance of the disease in sub-Saharan Africa. (Sunday Alamba/AP Photo)
Africa

The new coronavirus spread to Nigeria on Friday, as officials confirmed the first patient with COVID-19 in sub-Saharan Africa.

International officials have repeatedly warned that the virus could wreak havoc on weaker health systems and have focused efforts on trying to bolster such systems, particularly in African countries.

The first patient is an Italian who traveled to Lagos from Milan, the Nigerian Ministry of Health said. The virus has exploded in northern Italy this week, one of three countries outside China where the number of cases continues to increase rapidly.

The patient works in Nigeria, the ministry said. The man is clinically stable, has no serious symptoms, and is being cared for at the Infectious Disease Hospital in Yaba, Lagos.

Nigerian health officials said at a press conference they’ve been working on preparing for the virus since the outbreak in China was first reported.

“We’ve been preparing for a possible COVID-19 case for a while. We can all agree that we can’t build walls against viruses,” Chikwe Ihekweazu, director-general of Nigeria’s Center for Disease Control, added during a radio interview.

“The case showed no symptoms at the point of entry. However, our laboratory systems were able to confirm the disease upon presentation,” he added.

Officials are working on identifying everyone who came into contact with the patient, a process known as contact tracing. The new virus, which causes the COVID-19 disease, can be spread through the air, close contact, and contaminated surfaces.

A federal judge later in the day suspended all flights coming to Kenya from China because of the virus. The judge also ordered the immediate tracing and quarantine of the 239 passengers who were aboard a China Southern flight that landed on Feb. 26, The Star reported.

The ruling came after the Law Society of Kenya filed a case trying to reverse a decision by the country that allowed additional non-essential flights from China to land in Kenya.

The World International Health Organization (WHO) said Nigeria was one of 13 countries identified by experts as “high priority.” WHO experts were already on the ground in the country.

“With the first case of COVID19 in sub-Saharan Africa confirmed in Nigeria, the virus is no longer a threat but a reality in the Region,” Dr. Matshidiso Moeti, WHO’s regional director for Africa, said in a statement.

“Now is not the time for fear, but solidarity, cooperation & collective commitment from all.”

International experts have repeatedly warned of what the virus could do in a country with a weaker health system.

“Imagine this disease establishing itself in a weaker health system.”

“This disease may appear relatively mild in the context of a sophisticated health system,” Mike Ryan, director of WHO’s emergencies program, told reporters in Geneva earlier this month.

“That may not be the case if this disease reaches a health system that is not as capable as that of China.”

Kenyan officials this week said they have only 11 isolation beds ready to be used for virus patients.

China has officially reported tens of thousands of cases and thousands of deaths. The ruling Chinese Communist Party is believed to be underreporting the true numbers related to the epidemic.

The WHO sent lab tests and provided other support for nations across Africa.

New cases have been appearing in countries around the world. Brazil confirmed on Wednesday that a patient tested positive, the first confirmed case in South America. Georgia, Greece, North Macedonia, Norway, Pakistan, and Romania also reported cases for the first time on Wednesday or Thursday. New Zealand and Wales, along with Nigeria, reported new cases on Friday.

“No country should assume it won’t get cases. That could be a fatal mistake, quite literally,” WHO director-general said at a press conference on Thursday.

“This virus does not respect borders. It does not distinguish between races or ethnicities. It has no regard for a country’s GDP or level of development. The point is not only to prevent cases arriving on your shores. The point is what you do when you have cases.”

The new virus emerged in Wuhan, China in December 2019 and quickly circulated to other regions of China. Other countries soon began reporting cases. Dozens have confirmed at least one case and some have reported hundreds or thousands, including South Korea, Italy, and Iran.

Coronaviruses circulate in animals and can, in rare cases, jump to humans, in a process known as a “spillover.” The jump can occur due to a mutation in the virus or increased contact between animals and humans.

The origin of COVID-19 still isn’t known. Other factors, such as the exact way the disease is transmitted, are still being studied. The incubation period, or the period of time from when a person is infected to when symptoms develop, is believed to be between one and 14 days.

When people are sick and believe they may have the virus, health officials say they should self-isolate at home and call their healthcare provider. Depending on the circumstances, they may be asked to go to the hospital and be placed in quarantine there.

The best ways to avoid the virus include frequently washing hands with soap and water for at least 20 seconds, not touching one’s face with unwashed hands, and avoiding sick people.

There are no vaccines for the virus and no proven treatments for the disease.