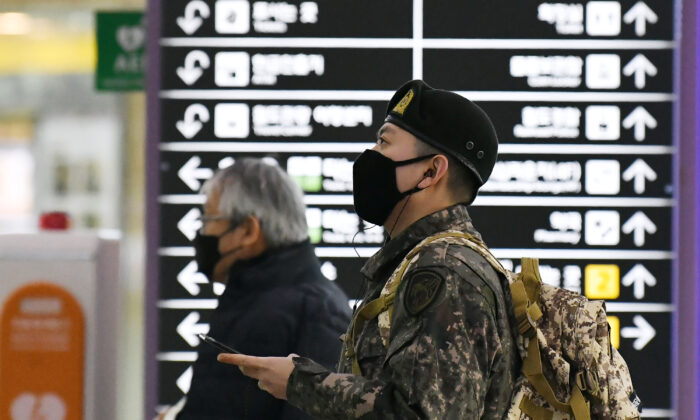 In South Korea, the spread of the novel coronavirus has spread to military personnel as local health authorities report another 52 new cases on Feb. 21.

Three military service members, one each in the Korean Army, Navy, and the Air Force, have tested positive for the virus, local outlet Yonhap News Agency reported on Friday, citing the Korean Centers for Disease Control and Prevention (KCDC). The members of the military were among the 52 new cases reported, bringing the national total to 156.

All three service members had visited or contacted people from the South Korean city of Daegu, located about 186 miles southeast of Seoul.

One infected service member is a 22-year-old Navy sailor based in South Korea’s Jeju Island. He visited his hometown Daegu from Feb. 13 to 18 and began having a cough after returning to Jeju. He is now being monitored at a local hospital.

The second case involves an Army officer in Jeungpyeong, a county in North Chungcheong Province. The officer had recently met with his girlfriend in Daegu. His friend attended the same church as the country’s 31st confirmed case—a 61-year-old Korean woman who tested positive on Feb. 18 and is believed to the the source of infection for about 82 other cases from the church.

The third case involves an Air Force soldier based in Gyeryong, a city in South Chungcheong Province. It is not known how he became infected with the virus.

Yonhap, citing a preliminary investigation by the military, stated that more than 5,000 military service members had visited Daegu and nearby areas during their recent vacation.

Service members who came into contact with the three infected servicemen have been placed under quarantine, according to the country’s health officials.

Of the 52 new cases, 41 are in Daegu and neighboring North Gyeongsang Province and three are in Seoul, according to KCDC. Authorities have confirmed that 39 cases are connected to the “super-spreader” at the church.

Of South Korea’s 156 confirmed cases, 111 are in Daegu and North Gyeongsang Province. There are also 16 cases, including five nurses, at Daenam Hospital in Cheongo near Daegu.

It was at this hospital that South Korea reported its first death from the virus—a 63-year-old man who was suffering from pneumonia. He died on Wednesday and tested positive for the virus after his death.

On Friday, Daegu and Cheongdo were declared “special management zones” by the South Korean Prime Minister Chung Sye-kyun due to a large number of confirmed cases in the two places.

“The government will take special measures by declaring the Daegu and Cheongdo areas as special care zones as a sudden rise in confirmed cases was reported there,” Chung said during a meeting about the coronavirus situation, according to Yonhap.

There has been a spike in the number of confirmed cases in South Korea for three consecutive days—20 on Wednesday and 53 on Thursday.

On Thursday, U.S. Forces Korea issued a statement saying that there are “zero confirmed cases” of the virus among the U.S. personnel in South Korea.

All U.S. service members have been told they can travel to and from Daegu and nearby areas for mission-essential purposes only. Special authorization is needed for non-essential travel.

The statement lists several areas in Daegu that are off-limits to U.S. service members, including the church, Daegu Medical Center, Searonan Hospital, and the Queenvell Hotel.