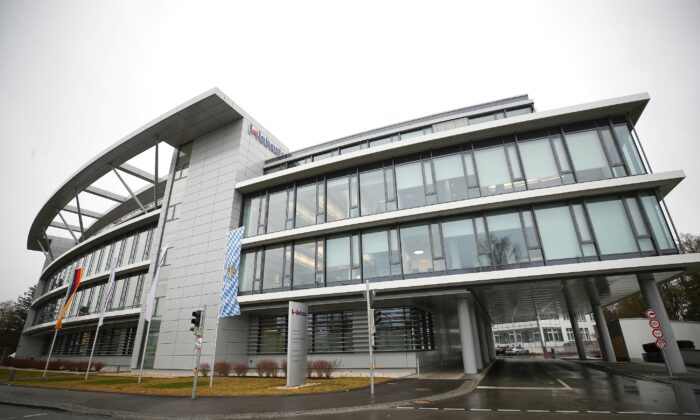 The headquarters of the German company, Webasto, in Stockdorf near Munich. Two employees of the company tested positive for the 2019 Novel Coronavirus, authorities said on Jan. 28, 2020. (Michael Dalder/Reuters)
Europe

The 33-year-old man, who lives near Starnberg, just south of Munich, caught the Wuhan coronavirus from a work colleague. They traveled together to a company training in the state of Bavaria last week.

The colleague, a woman from Shanghai, “started to feel sick on the flight home” on Jan. 23, Andreas Zapf, head of the Bavarian State Office for Health and Food Safety, said at a Jan. 28 press conference, reported Deutsche Welle. The woman had been visited in Shanghai recently by her parents, who live in the Wuhan area.

The man caught the coronavirus from the woman in what appears to be the first known case outside of China of the infection spreading between people who aren’t related. Multiple cases in different countries have cropped up from transmission between family members, including a man in Singapore who flew in from China and infected his son.

The virus has spread to 16 locations, U.S. Centers for Disease Control and Prevention (CDC) officials told reporters in a call on Jan. 27. Countries with confirmed cases include the United States, Japan, and Australia.

German officials said they’ve been preparing for the virus.

“It was expected that the virus would come to Germany,” German Health Minister Jens Spahn said in a statement on Tuesday. “The case in Bavaria shows that we’re well prepared.”

Health officials said in a statement Monday that the man who contracted the virus was isolated and is being monitored. They said he was in stable condition.

Infectious disease experts said the risk of the Bavarian population being infected with the new type of coronavirus is low.

German officials said people should avoid “unnecessary” travel to China as the virus continues spreading there. The Chinese Communist Party has reported a number of cases and deaths but some experts suspect the figures are actually much higher.

Germany is the second European country to confirm a coronavirus case, following France, which has now confirmed three cases. All three patients in that country had recently traveled to China, health officials said.

The 2019 Novel Coronavirus broke out in Wuhan last month and has spread across Hubei province and into other parts of China. The origin of the virus still isn’t known.

Coronaviruses are a large family of viruses in common in many different species of animals and in rare cases can infect people, such as in the cases of MERS and SARS. Person-to-person spread of those viruses were thought to have happened mainly via respiratory droplets produced when an infected person coughed or sneezed.

Symptoms of the 2019 coronavirus include a fever, coughing, and shortness of breath. The incubation period is believed to be 2 to 14 days.

There is currently no vaccine to prevent the infection and no cure once people have the infection. Prevention includes washing hands often, avoiding touching your eyes, nose, and mouth with unwashed hands, and staying away from people who are clearly sick.