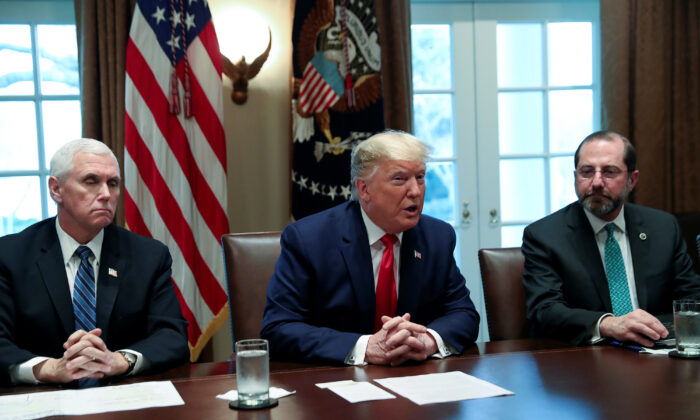 President Donald Trump, joined by Vice President Mike Pence (L) and Health and Human Services Secretary Alex Azar, speaks during a meeting with pharmaceutical executives to discuss developing a coronavirus vaccine, in the Cabinet Room of the White House on March 2, 2020. (Reuters/Leah Millis)
By Tom Ozimek

President Donald Trump said the COVID-19 outbreak highlights the importance of bringing back to the United States previously offshored supply chains for drugs and gear “that we need so badly” to fight the spread of the virus.

The Trump administration’s Coronavirus Task Force met with representatives of pharmaceutical and biotechnology companies at the White House on March 3. Trump said steps were already being taken to mitigate the public health risks of reliance on other countries for key drugs and equipment.

“The coronavirus shows the importance of bringing manufacturing back to America so that we are producing, at home, the medicines and equipment and everything else that we need to protect the public’s health,” Trump said. “That process has already started.”

“We want to make certain things at home. We want to be doing our manufacturing at home. It’s not only done in China; it’s done in many other places, including Ireland, and a lot of places make our different drugs and things that we need so badly,” Trump said.

At the meeting, pharmaceutical executives told Trump that treatments—though not yet vaccines—for COVID-19 could be ready in months.

One treatment, according to Lenny Schleifer, CEO of Regeneron, would reportedly not only treat people who have been infected, but also protect those who have not contracted COVID-19, by supplying them with premade antibodies that vaccines normally produce.

“If you get immunized with one of these vaccines, you’re going to make some antibodies to protect you,” Schleifer said. “We’re going to already make those antibodies and give them to you, so you don’t have to go through that whole process. So it’ll protect you.

“If all goes well, 200,000 doses per month can come out of our factory in New York, starting in August.”

A vaccine, according to a top U.S. health official, is still up to 18 months away.

“A vaccine that you make and start testing in a year is not a vaccine that is deployable,” said Anthony Fauci, head of the National Institute of Allergy and Infectious Diseases, according to Reuters. “So he’s asking the question when is it going to be deployable. And that is going to be the earliest, a year to a year and a half, no matter how fast you go.”

Rosemary Gibson, a senior adviser at the Hastings Center, a bioethics research institute, told The Epoch Times previously that reliance on other countries for life-saving medicines makes the United States vulnerable.

“This is a giant wake-up call,” she said, adding that the coronavirus-related supply-chain disruption has made this vulnerability hit home.

During a testimony in July 2019 at a hearing by the U.S.–China Economic and Security Review Commission, Gibson provided details of the depletion of some of America’s pharmaceutical industrial base.

“The U.S. can no longer make penicillin,” Gibson said in her testimony (pdf). “The last U.S. penicillin fermentation plant closed in 2004. Industry data reveal that Chinese companies formed a cartel, colluded to sell product on the global market at below market price, and drove all U.S., European, and Indian producers out of business. Once they gained dominant global market share, prices increased.

“The nation’s health security is in jeopardy.”

Besides drug shortage risks, supply chain disruption has resulted in shortages of personal protective equipment, such as N95 masks.

Health and Human Services (HHS) Secretary Alex Azar told Congress on Feb. 25 that the United States has a stockpile of about 30 million N95 masks, but might need as many as 300 million during the outbreak.

“I’ve been preaching the same message since 2007,” Mike Bowen, the founder of the Secure Mask Supply Association, told The Epoch Times in an emailed statement. “For fourteen years, I’ve warned about America’s foreign-controlled mask supply.”

Bowen has warned that an epidemic in China would disrupt supplies of masks, and if the outbreak turned into a global pandemic, this would seriously limit the response capability in countries like the United States.

“Would mask or respirator use by the general public be recommended in such a scenario today even with scientific evidence to support their use?” he wrote. “With limited U.S. supply, regardless of the science, the answer is certainly a resounding ‘no.’ A ‘Cover Your Cough’ campaign will be the only defense.”

During an interagency call on Feb. 26, officials from HHS and the Department of Homeland Security (DHS) discussed the possibility of invoking the Defense Production Act for the manufacture of personal protective equipment that can be worn to prevent infection, according to a DHS official.

Such equipment can include masks, gloves, and bodysuits.

The White House is also expected to meet this week with top executives from U.S. airlines and the cruise industry over the impact of the virus to their businesses, two people briefed on the matter said.

The number of coronavirus cases in the United States has ticked up in recent days, with 96 confirmed cases and six deaths in Washington state, where a cluster of cases is centered in a nursing home near Seattle.

Public health officials have urged common-sense steps to prevent contracting and spreading the virus, such as frequent hand washing and staying home when sick.