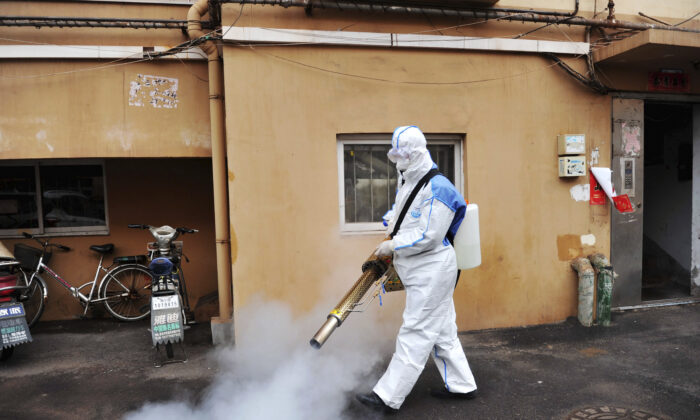 A worker wearing a protective suit sprays disinfectant in a neighborhood in Qingdao in eastern China's Shandong province on Jan. 28, 2020. (Chinatopix via AP)
US News

Two members of Congress called for shutting down travel between China and the United States amid the recent coronavirus outbreak that reportedly began in Wuhan, China.

Flights from China are still being allowed to land in the United States even as federal officials expanded screening for the virus this week to 20 airports. But the situation has grown serious enough to implement a ban on travel from China, Sen. Tom Cotton (R-Ark.) and Rep. Mike Gallgher (R-Wis.) said.

“Russia has closed its ENTIRE 2,600-mile border with China. Time to shut down travel between China and US,” Cotton said on Twitter early Thursday.

“China, but also Germany, Japan, Vietnam, Taiwan: all countries with person-to-person transmission of coronavirus. Meanwhile flights from China are landing in the US every hour. This has to stop,” he said the previous day.

China, but also Germany, Japan, Vietnam, Taiwan: all countries with person-to-person transmission of coronavirus. Meanwhile flights from China are landing in the US every hour. This has to stop.

Gallagher shared a post by Cotton and said that the United States needs “a targeted travel ban.”

“We are not acting aggressively enough. We need a targeted travel ban immediately or this will get much worse and we will see human-to-human transmission in the US,” he said in a statement on Twitter.

This is 100% right. We are not acting aggressively enough. We need a targeted travel ban immediately or this will get much worse and we will see human-to-human transmission in the US. https://t.co/kSgb1LqjUm

“Also it is abundantly clear that the CCP [Chinese Communist Party] is not being fully transparent about the origins and scale of the crisis. China has also refused the help of CDC experts for almost a month. We can’t let the CCP’s insecurity endanger the world.”

U.S. health officials said this week that travel restrictions are on the table but none have been implemented as of yet.

Two other Congressmen, Sens. Jeff Merkley (D-Ore.) and Todd Young (R-Ind.), sent a letter to the World Health Organization (WHO) urging the group to declare a global health emergency over the virus.

The senators, both members of the Senate Foreign Relations subcommittee, asked WHO Chief Dr. Tedros Adhanom Ghebreyesus to reverse his group’s decision last week not to declare such an emergency.

The declaration “would grant WHO broad authority to issue legally-binding recommendations on whether countries should impose trade and travel restrictions, facilitating global capacity to coordinate an effective response,” they wrote.

BREAKING: China has now confirmed > 6,000 cases of coronavirus. As the threat to US safety grows, @SenToddYoung & I are asking @WHO to declare a public health emergency of int’l concern & issue legally-binding recommendations to stop the disease’s spread. https://t.co/bS0rPg8ZMP pic.twitter.com/vKnnFoTHzJ

WHO “neglected to declare” SARS and MERS as global health emergencies, the senators added, writing: “We hope that this time the determination will not be overdue.”

Ghebreyesus said on Wednesday that WHO’s emergency committee would reconvene on Thursday to reassess the coronavirus situation.

“This potential for further global spread is why I called the” emergency committee, Ghebreyesus said in a statement. “Most cases reported outside are in people with a travel history from China or have been in contact with people who have been there. But there are some signs of person-to-person transmission outside China.”